Owen Wister (July 14, 1860 – July 21, 1938) was an American writer and "father" of western fiction. He is best remembered for writing The Virginian, although he never wrote about the West afterwards. 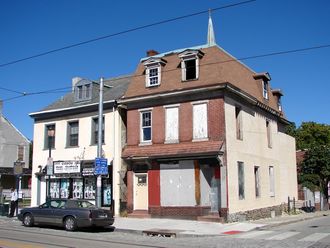 Owen Wister was born on July 14, 1860,[1] in Germantown, a well-known neighborhood in the northwestern part of Philadelphia, Pennsylvania.[2] His father, Owen Jones Wister, was a wealthy physician raised at Grumblethorpe in Germantown.[3] He was a distant cousin of Sally Wister. His mother, Sarah Butler Wister, was the daughter of Fanny Kemble, a British actress, and Pierce Mease Butler.[4]

Wister briefly attended schools in Switzerland and Britain, and later studied at St. Paul's School in Concord, New Hampshire and Harvard University in Cambridge, Massachusetts, where he was a classmate of Theodore Roosevelt, a member of Hasty Pudding Theatricals, an editor of the Harvard Lampoon, and a member of Delta Kappa Epsilon (Alpha chapter). As a senior Wister wrote the Hasty Pudding's then most successful show, Dido and Aeneas, whose proceeds aided in the construction of their theater. Wister graduated from Harvard in 1882.

At first he aspired to a career in music and spent two years studying at a Paris conservatory. Thereafter, he worked briefly in a bank in New York before studying law; he graduated from Harvard Law School in 1888. Following this, he practiced with a Philadelphia firm but was never truly interested in that career. He was interested in politics, however, and was a staunch supporter of U.S. president Theodore Roosevelt. In the 1930s, Wister opposed President Franklin D. Roosevelt and his New Deal.

He began his literary work in 1891.[5] Wister had spent several summers out in the American West, making his first trip to Wyoming in 1885. Like his friend Teddy Roosevelt, Wister was fascinated with the culture, lore and terrain of the region. On an 1893 visit to Yellowstone, Wister met the western artist Frederic Remington; who remained a lifelong friend. When he started writing, he naturally inclined towards fiction set on the western frontier. Wister's most famous work remains the 1902 novel The Virginian, the loosely constructed story of a cowboy who is a natural aristocrat, set against a highly mythologized version of the Johnson County War and taking the side of the large land owners. This is widely regarded as being the first cowboy novel and was reprinted fourteen times in eight months.[6] The book was written in the library of The Philadelphia Club, where Wister was a member, and is dedicated to Theodore Roosevelt.

In 1904 Wister collaborated with Kirke La Shelle on a successful stage adaptation of The Virginian that featured Dustin Farnum in the title role.[7] Farnum reprised the role ten years later in Cecil B. DeMille's film adaptation of the play.[8]

He was a member of several literary societies and was a fellow of the American Academy of Arts and Sciences, and a member of the Board of Overseers of Harvard University.[5] 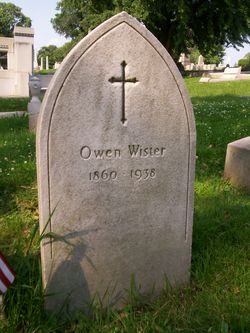 In 1938, Wister died at his home in Saunderstown, Rhode Island. He is buried in Laurel Hill Cemetery in Philadelphia.[citation needed]

Since 1978, University of Wyoming Student Publications has released the literary and arts magazine Owen Wister Review. The magazine was published bi-annually until 1996. It became an annual publication in the spring of 1997.[citation needed]

Just within the western boundary of the Grand Teton National Park in Wyoming, there is an 11,490-foot mountain named Mount Wister named for Owen Wister.[12]

Near a house that Wister built near La Mesa, California, but never occupied due to his wife's death, is a street called "Wister Drive." In the same neighborhood are found "Virginian Lane" and "Molly Woods Avenue."[13][14]