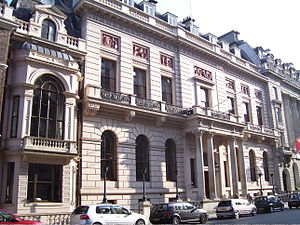 The Oxford and Cambridge Club.

The Oxford and Cambridge Club is a gentleman's club founded in 1830 for members of the Universities of Oxford and Cambridge. The current clubhouse is located at 71-77 Pall Mall, London, England. Designed by the architect Sir Robert Smirke, it was opened to members in 1838.[1] In 1989, the club's Crown lease was extended until 2087; major refurbishment of the accommodation was subsequently carried out in 1996. Women were not permitted to become full members until 1996.

Eight years after the foundation of the original United University Club in 1821, the waiting list had become inordinately long and it was decided to form a second club. On 17 May 1830, Lord Palmerston, who had been on the original committee of the United University Club, presided over a meeting in the British Coffee House in Cockspur Street in 1830 to discuss the project.[1]

The new club, called the Oxford and Cambridge University Club, took temporary premises at what is now 18 St James's Square. In 1835 the decision was taken to build a new club in Pall Mall on a Crown lease.[1] William Ewart Gladstone's name appears in the earliest list of members that has survived (1833). He was on the general committee when the clubhouse was being built, but his chief concern was that all the staff should be able to go to church on Sundays. He pressed the matter at meeting after meeting until a pew was reserved at St Philip's Church, Regent Street, and the servants were told they might use it. Gladstone resigned his membership in 1842, but the club accounts show "Pew Rent for Servants £8/8/0" until 1858.[2]:45

Clubland was disturbed in those days by disputes about whether or not smoking should be allowed. When the Oxford and Cambridge proposed a smoking room for the new building, fifty members summoned a special meeting and tried to get the decision reversed. They were defeated by just fifteen votes.[2]:134 Further disputes arose when gas lighting arrived and the motion to put it throughout the club was defeated, it only going into the basement and mezzanine floors. When electric lighting was to be introduced, members succeeded in getting a Standing Order passed that any member dining might call for a candle at his table.[2]:155, 160 This Order is still in force.

The Oxford and Cambridge boasts one of the best club libraries in London, and even with some sales of unwanted accumulations, over 20,000 volumes remain to form a well-balanced and very usable collection. During the Second World War a parachute mine fell into the kitchen but failed to explode.[2]:87

By the middle of the 1960s clubland generally was in the financial doldrums and the Oxford and Cambridge was no exception. The members were not rich, predominantly middle-class, and the middle classes in Britain had begun to experience a revolution of declining expectations. In an attempt to boost the membership (and therefore increase the income) some "fairly desperate" expedients were tried. Wives and daughters would be permitted to become associate members, and they could propose and second other women who might have no connection with any male member of the club at all. More "drastic" was the 1971 innovation, when it was decided that graduates of any university, whether in Britain or overseas, should be eligible for membership. Later the same year the old United University Club abandoned its struggle with declining circumstances and voted to merge with the Oxford and Cambridge.[2]:111–16 However the joint club - now known as the United Oxford and Cambridge University Club - reverted to being for Oxford and Cambridge men only plus, as lady associates, Oxford and Cambridge women and close female relatives of members. This partially reversed the aforementioned "outrages".

In the late 1970s, the club had continual difficulties with Westminster City Council over various infestations. As a result, the club began to retain a cat upon the premises and subsequently, the vermin ceased to be a problem.

The club's separate membership policies for men and women came under attack in the mid-1990s. In February 1995, a statement signed by the heads of more than 70 Oxford and Cambridge colleges, two vice chancellors, and Oxford's chancellor, declared that the two universities were disassociating from the Club "because of what they call[ed] its 'offensive' and 'discriminatory' policies to women".[3] Dr Peter North, the vice chancellor of Oxford, stated at the time that the "'university council has asked the law department to consider our legal position in relation to the use of the universities' names and our coats of arms'".[4] Four months later, the club voted to allow lady associate members "access to the main staircase and the library", provided they pay an extra fee of £100.[5] In February 1996, members of the club voted to admit women as full members. Queen Margrethe II of Denmark became the club's first Honorary Lady Member in 1997.[6] In 2001 the club reverted to its original name of the Oxford and Cambridge Club.

Membership remains open only to Oxbridge members. However, it is not necessary to have graduated, only to have matriculated, thus current undergraduates may also join. The Club has over 4,500 members worldwide. As of 2015, the London membership subscription costs £1,161 per annum, with significant discounts available for overseas, retired, and younger members. The club does not charge an entrance fee. There is a waiting list for those wishing to become members.