An oxymoron (usual plural oxymorons, less commonly the Latin-style oxymora) is a figure of speech that juxtaposes elements that appear to be contradictory. Oxymorons appear in a variety of contexts, including inadvertent errors (such as "ground pilot") and literary oxymorons crafted to reveal a paradox.

All forms of oxymoron involve an adjective–noun combination of two words. For example, the following line from Tennyson's Idylls of the King contains two oxymorons:

Other examples of oxymorons of this kind include:

Noun–verb combinations of two words, such as the line "The silence whistles" from Nathan Alterman's "Summer Night", or in a song title like Simon & Garfunkel's "The Sound of Silence" are not oxymorons but are paradoxes.

Oxymorons are not always a pair of words; they can also be devised in the meaning of sentences or phrases.

Oxymoron is derived from the 5th century Latin: oxymorus, oxymōrus,[1] which is derived from the Ancient Greek: ὀξύς oksús "sharp, keen, pointed"[2] and μωρός mōros "dull, stupid, foolish",[3] making the word itself an oxymoron.[4] However, the combined Greek form ὀξύμωρον (oksúmōron) does not in fact appear in the extant Greek sources.[5]

Richard Lederer assembled a taxonomy of oxymorons in an article in Word Ways in 1990,[6] running from single-word oxymorons such as "pianoforte" (literally, "soft-loud") through "doublespeak oxymorons" (deliberately intended to confuse) and "opinion oxymorons" (editorial opinions designed to provoke a laugh). In general, oxymorons can be divided into expressions that were deliberately crafted to be contradictory and those phrases that inadvertently or incidentally contain a contradiction, often as a result of a punning use of one or both words.

Many oxymorons have been popularised in vernacular speech. Examples include "controlled chaos", "open secret", "organized mess", "alone in a crowd", and "accidentally on purpose".[citation needed]

There are also examples in which terms that are superficially contradictory are juxtaposed in such a way that there is no contradiction. Examples include "same difference", "jumbo shrimp", and "hot ice" (where "hot" means "stolen" and "ice" means "diamonds", in criminal argot).[citation needed]

Writers often use an oxymoron to call attention to an apparent contradiction. For example, Wilfred Owen's poem "The Send-off" refers to soldiers leaving for the front line, who "lined the train with faces grimly gay." The oxymoron "grimly gay" highlights the contradiction between how the soldiers feel and how they act: though they put on a brave face and act cheerfully, they feel grim.

Similarly, in Henry James' novella The Lesson of the Master, a character is described as dressed in a manner "conventionally unconventional, suggesting a tortuous spontaneity." In this way James highlights the contradiction between the character's desire to appear spontaneous, and the efforts she makes to appear so.

One case where many oxymorons are strung together can be found in Shakespeare's Romeo and Juliet, where Romeo declares:

Although a true oxymoron is "something that is surprisingly true, a paradox", Garry Wills has argued that modern usage has brought a common misunderstanding[7] that "oxymoron" is nearly synonymous with "contradiction". The introduction of this misuse, the opposite of its true meaning, has been credited to William F. Buckley.[8]

Sometimes a pair of terms is claimed to be an oxymoron by those who hold the opinion that the two are mutually exclusive. That is, although there is no inherent contradiction between the terms, the speaker expresses the opinion that the two terms imply properties or characteristics that cannot occur together. Such claims may be made purely for humorous effect. Comedian George Carlin popularized many examples, such as "military intelligence", "freedom fighters", and "business ethics". Another example is the term "civil war", which is not an oxymoron, but can be claimed to be so for humorous effect, if "civil" is construed as meaning "polite" rather than "between citizens of the same state". Alternatively, such claims may reflect a genuinely held opinion or ideological position. Well-known examples include claims made against "government worker", "honest broker", "educational television", "Microsoft Works", and "working from home". 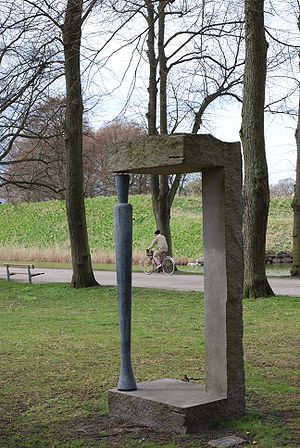 In his book More on Oxymoron, the artist Patrick Hughes discusses and gives examples of visual oxymorons. He writes:

Examples include waves in the sand, a fossil tree, and topiary representing something solid like an ocean liner. Hughes lists further examples of oxymoronic objects, including:[10]

Oxymorons, in the sense of "single-word oxymorons" such as "pianoforte", are very common in Chinese and neighboring languages such as Japanese. Archetypal examples include 男女 (man and woman, male and female, gender), 陰陽 (yin and yang), 善悪 (good and evil, morality), formed from pairs of monosyllabic words that can each be written with a single character, and that are used to indicate couples, ranges, or the trait that these are extremes of.