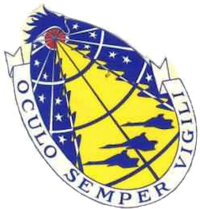 Emblem of the 32d Aircraft Control and Warning Squadron

The 732d Aircraft Control and Warning Squadron was assigned to Oznoma AFS by the 33d Air Division on 8 November 1956. It began operating an AN/FPS-3 search radar and an AN/FPS-6 height-finder radar at the station, and initially the station functioned as a Ground-Control Intercept (GCI) and warning station. As a GCI station, the squadron's role was to guide interceptor aircraft toward unidentified intruders picked up on the unit's radar scopes.

Ozona was closed in 1963 due to budget reductions. Operations ceased on 1 August 1963 and the squadron was discontinued. Today, what was Ozona Air Force Station is privately owned. The station is abandoned, the remaining buildings are frozen in time complete with electrical wires connected to substation which no longer remains. Most of the buildings that remain are in a very deteriorated condition. The former Air Force housing area is in use as single family residences, now called "Crockett Heights".

Ozona AFS most important mission was during the Cuban Missile Crisis. Its Radars and radio were used to keep track of the U2's being flown out of Laughlin AFB on their flights over Cuba. The crisis delayed closing the base for another year.