The Père Lachaise is located in the 20th arrondissement and was the first garden cemetery, as well as the first municipal cemetery in Paris.[2] It is also the site of three World War I memorials. The cemetery is located on the Boulevard de Ménilmontant. The Paris Métro station Philippe Auguste on Line 2 is next to the main entrance, while the station Père Lachaise, on both Line 2 and Line 3, is 500 meters away near a side entrance.

The cemetery of Père Lachaise opened in 1804[3] and takes its name from the confessor to Louis XIV, Père François de la Chaise (1624–1709), who lived in the Jesuit house rebuilt during 1682 on the site of the chapel. The property, situated on the hillside from which the king watched skirmishing between the armies of the Condé and Turenne during the Fronde, was bought by the city in 1804. Established as a cemetery by Napoleon during that year, plans were laid out by Alexandre-Théodore Brongniart; the property was later extended. Napoleon, who had been proclaimed Emperor by the Senate three days earlier, had declared during the Consulate that "Every citizen has the right to be buried regardless of race or religion".

After the closing of the Holy Innocents' Cemetery on 1 December 1780 and as the city graveyards of Paris filled, several new, large cemeteries, outside the precincts of the capital, replaced them: Montmartre Cemetery in the north, Père Lachaise in the east, and Montparnasse Cemetery in the south. Near the middle of the city is Passy Cemetery.[4]

The French officials approved the transformation of 17 hectares of Mont-Louis into the Cemetery of the East in 1803 and the work was given to neoclassical architect Alexandre-Theodore Brongniart. He used English-style gardens as inspiration, designing the cemetery with uneven paths adorned with diverse trees and plants and lined with carved graves. He anticipated various funerary monuments but only one was finally built: the grave of the Greffulhe family, in a refined neo-Gothic style.

At the time of its opening, the cemetery was considered to be situated too far from the city and attracted few funerals. Moreover, many Roman Catholics refused to have their graves in a place that had not been blessed by the Church. In 1804, the Père Lachaise contained only 13 graves. Consequently, the administrators devised a marketing strategy to improve the cemetery's stature: in 1804, with great fanfare, they organized the transfer of the remains of Jean de La Fontaine and Molière to the new resting place. The next year there were 44 burials, with 49 during 1806, 62 during 1807 and 833 during 1812. Then, in another great spectacle of 1817, the purported remains of Pierre Abélard and Héloïse d'Argenteuil were also transferred to the cemetery along with their monument's canopy made from fragments of the abbey of Nogent-sur-Seine. By tradition, lovers or lovelorn singles leave letters at the crypt in tribute to the couple or in hope of finding true love.

This strategy achieved its desired effect: people began clamoring to be buried among the famous citizens. Records show that the Père Lachaise contained more than 33,000 graves in 1830. Père Lachaise was expanded five times: in 1824, 1829, 1832, 1842 and 1850. Presently there are more than 1 million bodies buried there, and many more in the columbarium, which holds the remains of those who had requested cremation.[5]

The Communards' Wall (Mur des Fédérés), located within the cemetery, was the site where 147 Communards were executed by the French Army during the Semaine sanglante, "The Bloody Week", following the final battles between the Army and the Paris Commune.[6][7] The Commune soldiers had been captured in earlier battles by French Army, were taken to the prisons of Mazas and la Roquette, where they were quickly tried by military courts and sentenced to death. They were then taken to Pere Lachaise, where they were lined up against the wall and shot, and buried in common graves.[8] the site is a traditional rallying point for members of the French political Left. Adolphe Thiers, the second elected President of France, and the first President of the French Third Republic, who led the suppression of the Commune. is also interred in the cemetery.

A funerary chapel was erected in 1823 by Étienne-Hippolyte Godde at the exact place of the ancient Jesuit house. This same Neoclassical architect created the monumental entrance a few years later.

A columbarium and a crematorium of a Byzantine Revival architecture were designed in 1894 by Jean-Camille Formigé in one building. The roof consists of a large brick and sandstone dome, three small domes and two chimneys. In the 1920s, the main dome was decorated with stained glass windows by Carl Maumejean. The final columbarium is composed of four levels: two in the basement and two exterior levels, both can contain more than 40,800 cases.

The crematorium was the first built in France. The first cremation took place on 30 January 1889,[9] a little over a year after the law of 15 November 1887 proclaimed freedom of funerals and thus authorized cremations. Nonetheless, cremation remained uncommon until the end of the 20th century. With the work of anticlerical and free-thinkers (Charles-Ange Laisant, André Lorulot), the use of cremation became more popular after overturning of the ban by the Catholic Church in 1963. From 49 cremations in 1889, there were about 5,000 cremations at the beginning of the 21st century. In 2012, cremation represents 45% of funerals in Paris.[10]

Inside the columbarium rest the remains of numerous celebrities including the director Max Ophuls and the comedian Pierre Dac. The box inscribed with Maria Callas’ name is only a cenotaph.

An 1804 law[11] put in place by Napoleon addressed the question of cemetery organization relating to religious beliefs. It was required that an entire cemetery be built, or at least a section of a large cemetery, should be dedicated to a specific religion. Another law in 1881 repealed the former law but by that time at Père Lachaise, a Jewish enclosure and a Muslim enclosure already existed.[citation needed]

The law of separation of church and state on 9 December 1905 had no impact on Père Lachaise because religious emblems were still allowed on private funeral monuments. The cemetery cross was removed in June 1883.[12]

Where the former house of Père Lachaise stood, Alexandre-Theodore Brongniart envisioned an outstanding pyramid to be used by all Christian denominations. Unfortunately, it was never constructed but the Parisian architect Etienne Hippolyte Godde began building a chapel in 1820. It was sanctified by the Catholic Church in 1834 and is supported by the basilique Notre-Dame du Perpetuel Secours.

In 1804, a law was passed which allowed the sharing of cemeteries between diverse religions. The Jewish enclosure in Père Lachaise opened on 18 February 1810 in the 7th division.[13] Enclosed by a wall, this part of the cemetery included a purification room and a pavilion for the caretaker.

From 1865 to 1887 the 87th division also served as the Jewish enclosure. After the revocation of segregation within cemeteries in 1881, the walls of the enclosure were destroyed, and the Jewish dead were buried in the 96th division.[13]

Some noteworthy individuals buried in the 19th century include the actress Rachel Felix, the first French rabbi, David Sintzheim, and Robles, Singer and Fould Rothschild.[14]

In 1856, a Muslim enclosure was opened in the 85th division – part of this section of the cemetery was newly acquired in the last extension in 1850. Work on the mosque started in 1855 based on the plans created by Marie-Gabriel Jolivet. The monument included a waiting room, a lavatorium intended for the purification of Muslims, and a counter for religious effects.[13]

The Muslim enclosure opened on 1 January 1857, making it the first Muslim cemetery in France.[15] Between 1856 and 1870, there were only 44 burials – 6 perpetual concessions, 7 temporary and 31 free of charge. The enclosure was reduced multiple times and in 1871, an unused part was dedicated to the Jewish religion.

The law of 14 November 1881 made segregation in cemeteries illegal.[16] The fence of the enclosure was removed but the plant hedge was preserved. Despite the law, the mosque was conserved but the Ottoman Empire, responsible for maintenance, lapsed in their responsibility. Plans for reconstruction were made, but during WWI, when the Ottomans became an ally to Germany and an enemy to France, those plans were cancelled. The mosque was destroyed in 1914 and a plan for reconstruction was abandoned in 1923 in lieu of the project to build the Grand Mosque of Paris.[17]

In 1899, the Monument aux Morts by Albert Bartholomé was erected in Père Lachaise as a memorial to unidentified deceased Parisians. The monument holds a communal ossuary.

In addition to the elaborate tombs, there are various monuments dedicate to individuals or groups of people including: 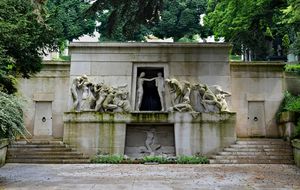 Behind the Aux Morts (To the Dead) monument sculpted by Paul-Albert Bartholomé lies an ossuary of the bones of Parisians from cemeteries all over the city, a smaller kind of modern-day catacombs. Although the monument is well known, it is not general knowledge that it is also an ossuary, and its doors usually remain closed and locked to the public. When it became overcrowded recently[when?], the bones were removed for cremation and returned to the ossuary after the incineration process. In the Père Lachaise ossuary, efforts are made to store bones and ashes in separate boxes.[18]

Père Lachaise is still an operating cemetery and accepting new burials. However, the rules to be buried in a Paris cemetery are rather strict: people may be buried in one of these cemeteries if they die in the French capital city or if they lived there. Being buried in Père Lachaise is even more difficult nowadays as there is a waiting list: very few plots are available.[19] The grave sites at Père Lachaise range from a simple, unadorned headstone to towering monuments and even elaborate mini chapels dedicated to the memory of a well-known person or family. Many of the tombs are about the size and shape of a telephone booth, with just enough space for a mourner to step inside, kneel to say a prayer, and leave some flowers.[citation needed]

The cemetery manages to squeeze an increasing number of bodies into a finite and already crowded space. One way it does this is by combining the remains of multiple family members in the same grave. At Père Lachaise, it is not uncommon to reopen a grave after a body has decomposed and inter another coffin. Some family mausoleums or multi-family tombs contain dozens of bodies, often in several separate but contiguous graves. Shelves are usually installed to accommodate their remains.[citation needed]

During relatively recent times, the Père Lachaise has adopted a standard practice of issuing 30-year leases on gravesites, so that if a lease is not renewed by a family, the remains can be removed, space made for a new grave, and the overall deterioration of the cemetery minimized. Abandoned remains are boxed, tagged and moved to Aux Morts ossuary, still in the Père Lachaise cemetery.[20]

Plots can be bought in perpetuity or for 50, 30 or 10 years, the last being the least expensive option. Even for the case of mausoleums and chapels, coffins are usually below ground.[citation needed]

Although some sources incorrectly estimate the number of interred as 300,000 in Père Lachaise, according to the official website of the city of Paris, one million people have been buried there to date.[5] Along with the stored remains in the Aux Morts ossuary, the number of human remains exceeds 2–3 million.[citation needed]

Père Lachaise is often referenced in French culture and has been included in various films, literary works, video games and songs. A number of English-language works also make reference to the cemetery.