The PBS NewsHour is an American daily evening television news program that is broadcast on the Public Broadcasting Service (PBS), airing seven nights a week on more than 300 of the public broadcaster's member stations. As the nation's first hour-long nightly news broadcast, the program is known for its in-depth coverage of issues and current events.

Since August 2013, the program's weekday broadcasts – which run one hour in length, and are produced by Washington, D.C. member station WETA-TV – have been co-anchored by Gwen Ifill and Judy Woodruff (who are at present, the only two women serving as lead anchors of a national nightly news program on broadcast television).[2] Since its launch in September of that same year, the Saturday and Sunday editions of the program (titled as PBS NewsHour Weekend) – which run for 30 minutes and are produced by New York City PBS member station WNET – have been anchored by Hari Sreenivasan.

The PBS NewsHour originates from WETA's studios in Arlington County, Virginia with additional facilities in San Francisco and Denver.[3] It is a collaboration between WNET, WETA-TV, and fellow PBS member television station KQED in San Francisco.

In 1973, Robert MacNeil and Jim Lehrer teamed up to cover the United States Senate Watergate hearings for PBS. The two earned an Emmy Award for their unprecedented gavel-to-gavel coverage.[4]

This recognition led to the 1975 creation of The Robert MacNeil Report, a half-hour local news program for WNET, which debuted on October 20 of that year; each episode of the program covered a single issue currently in the news in depth. Less than a 1½ months later on December 1, 1975, the program was renamed The MacNeil/Lehrer Report and began to air on PBS stations nationwide. Most editions employed a two-anchor, two-city format, with MacNeil based in New York City and Lehrer based at WETA's studios in Arlington. In September 1981, production of the program was taken over by MacNeil/Lehrer Productions, a partnership between MacNeil, Lehrer and the Gannett Company; the latter would sell its stake in the production company in 1986. Liberty Media bought a 67% controlling equity stake in MacNeil/Lehrer Productions in 1994, but MacNeil and Lehrer retained editorial control.[5]

On September 5, 1983, having decided to start competing with the nightly news programs on the Big Three television networks – ABC, CBS and NBC – instead of complementing them, the program was expanded to one hour and incorporated other changes such as the introduction of "documentary reportage from the field";[6] it became known at that time as The MacNeil/Lehrer NewsHour.

On May 17, 2006, the program underwent its first major change in presentation in years, adopting a new graphics package and a reorchestrated version of the show's theme music (originally composed by Bernard Hoffer).[citation needed] On December 17, 2007,[10] the NewsHour became the second nightly broadcast network newscast to begin broadcasting in high definition (following NBC Nightly News, which switched to HD in March of that year), with the broadcasts presented in a letterboxed format for viewers with standard-definition television sets watching either through cable or satellite television. The program also introduced a new set and upconverted its existing graphics package to HD.

On May 11, 2009, PBS announced that the program would be revamped on December 7 of that year[11] under a revised title as the PBS NewsHour.[1] In addition to an increased integration between the NewsHour website and nightly broadcast, the updated production would feature co-anchors, as had been the practice until Robert MacNeil's 1995 departure from the program.[12] The overhaul was described by Jim Lehrer as the first phase in his gradual move toward retirement.

Lehrer formally ended his tenure as a regular anchor of the program in June 2011. He continued to occasionally anchor on Fridays afterward, when he usually leads the political analysis segment with Mark Shields and David Brooks.[14]

Transfer of production and expansion to weekends (2013–present) 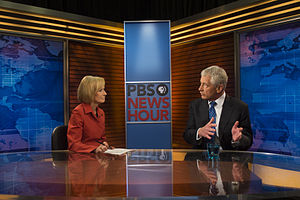 On August 6, 2013, Gwen Ifill and Judy Woodruff were named as co-anchors and co-managing editors of the NewsHour broadcast. The two share anchor duties on the Monday through Thursday editions, with Woodruff solo anchoring on Fridays due to Ifill's duties as host of the political discussion program Washington Week (which first airs on most PBS stations on Friday evenings).[15]

For much of its history, the PBS NewsHour aired only on Monday through Friday evenings; however on September 7, 2013, the program expanded to include weekend editions on Saturday and Sundays, with Hari Sreenivasan serving as anchor of those broadcasts. Although the weekend broadcasts are branded PBS NewsHour Weekend, those editions instead air for a half-hour; in addition, the Saturday and Sunday editions originate from the New York City studios of WNET, as opposed to the program's main production facilities at the Arlington, Virginia, studios of WETA-TV.[16][17] Plans for a weekend edition of PBS NewsHour had been considered as early as March 2013.[18]

MacNeil/Lehrer Productions announced in a letter to the show's staffers on October 8, 2013, that it had offered to transfer ownership in the PBS NewsHour to WETA. In the letter, Jim Lehrer and Robert MacNeil cited their reduced involvement with the program's production since their departures from anchoring, as well as "the probability of increasing our fundraising abilities."[19][20] The transfer was approved by the WETA board of trustees on June 17, 2014, and took effect on July 1. At that time, production of the program was taken over by NewsHour Productions, LLC, a wholly owned subsidiary of WETA. WETA also acquired MacNeil/Lehrer Productions' archives, documentaries, and projects, though not the company's name. PBS NewsHour Weekend was not affected by the ownership transfer and continues to be produced by WNET.[5]

On July 20, 2015, the PBS NewsHour introduced an overhauled visual appearance for its weekday broadcasts, debuting a new minimalistic set designed by Eric Siegel and George Allison, which heavily incorporates PBS' longtime "Everyman" logo. The program also introduced a new graphics package by Troika Design Group and an original theme music composition by Edd Kalehoff, which incorporates a reorchestration of the nine-note "Question and Answer" musical signature that has been featured within the program's theme since its premiere in 1975.[21][22][23][24] PBS NewsHour Weekend retained its graphics package that had been used since the launch of the Saturday and Sunday editions, as well as the theme music by David Cebert until August 29, 2015, when the program transitioned to the same theme music and graphics package as the weekday NewsHour broadcasts.

Behind the scenes at The Newshour, during a Gen. Peter Pace interview.

The program is notable for being shown on public television. As such, there are no interruptions during the program to run advertisements (though like most public television programs, it does feature "corporate image" advertisements at the beginning and end of each broadcasts, as well as barker interruptions extolling viewers to donate pledges to their local PBS member station or member network during locally produced pledge drive events).

The program has a more deliberate pace than the news broadcasts of the commercial networks it competes against, allowing for deeper detail in its story packages and feature segments. At the start of the program, the lead story is covered in depth, followed by a news summary that lasts roughly between six and eight minutes, briefly explaining many of the top national and international news headlines; international stories often include excerpts of reports filed by ITN correspondents. This is usually followed by three or four longer news segments – typically running six to 12 minutes each – which explore a few of the events previously mentioned in the headline segment in depth and include discussions with experts, newsmakers, and/or commentators. The program formerly included a reflective essay on a regular basis, but these have been curtailed in recent years. On Fridays, the program features political analysis and discussion between two regular contributors, one from each of the Republican and Democratic parties, and one host from among the senior correspondents. Since 2004, the usual participants have been syndicated columnist Mark Shields and New York Times columnist David Brooks. Analysts who fill in when Shields or Brooks are absent have included David Gergen, Thomas Oliphant, Rich Lowry, William Kristol, Ramesh Ponnuru, Ruth Marcus, Michael Gerson, and E.J. Dionne.

After the United States–led invasion of Iraq in 2003, the NewsHour began what it called its "Honor Roll", a short segment displaying in silence the picture, name, rank, and hometown of U.S. military personnel killed in Iraq. On January 4, 2006, the NewsHour added military personnel killed in Afghanistan to the segment. According to Nielsen ratings at the program's website, 2.7 million people watch the program each night, and 8 million individuals watch in the course of a week.

The NewsHour is broadcast on more than 300 PBS member stations, making it available to 99% of the viewing public, and audio from the program is broadcast by some NPR radio stations. Broadcasts of the NewsHour are also made available worldwide via satellites operated by various agencies such as Voice of America.

Archives of shows broadcast after February 7, 2000, are available in several streaming media formats (including full-motion video) at the program's website. The show is available to overseas military personnel on the American Forces Network. Audio from select segments is also released in podcast form, available through several feeds on PBS's subscriptions page and through the iTunes Store.

On December 4, 2009, when introducing the new PBS NewsHour format, Jim Lehrer read out a list of guidelines in what he referred to as "MacNeil/Lehrer journalism."[31] They are as follows:

Critics have accused the American news media—including the NewsHour—of having a pro-establishment bias.

In October 2006 the media criticism group Fairness and Accuracy in Reporting (FAIR) accused the NewsHour of lacking balance, diversity, and viewpoints of the general public, and corporate viewpoints. FAIR found that the NewsHour's guest list from October 2005 to March 2006 had Republicans outnumbering Democrats 2–1, and people of color accounting for 15 percent of U.S.–based sources.[33] FAIR also protested in 1995 when Liberty Media purchased a majority of the program, citing Liberty's majority owner, John Malone, for his "Machiavellian business tactics" and right-wing sentiments.[34]

FAIR seems to be accusing us of covering the people who make decisions that affect people's lives, many of whom work in government, the military, or corporate America. That's what we do: we're a news program, and that's who makes news.... I take issue with the way the FAIR report characterizes each guest, which they have obviously done very subjectively. Witness the trashing of Mark Shields and Tom Oliphant (in the full report), who are not liberal enough for FAIR's taste. When you get down to arguing about degrees of left-and-rightness, I think you undermine your own argument.

She also accused FAIR of counting sound bites as interviews, thereby skewing their numbers toward the political party holding a majority (at the time of FAIR's report, Republican Party).[35]

In 2003 UCLA political scientist Tim Groseclose and Missouri economist Jeff Milyo evaluated various media programs based on "think tank" citations to map liberal versus conservative media slants and published a study alleging liberal media bias in general. Based on their research, PBS NewsHour is the most centrist news program on television and the closest to a truly objective stance.[36][37] However, their methodology has been questioned.[38]