From Infogalactic: the planetary knowledge core
(Redirected from PK-37)
Jump to: navigation, search 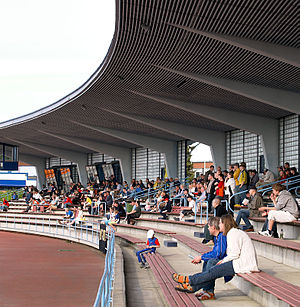 Pallo-Kerho 37, also known as PK-37, is a Finnish football club from the city of Iisalmi. The club was founded on 10 October 1937 as a bandy and football club, but later on it also became known for its pesäpallo and ice hockey sections. Nowadays PK-37 concentrates only on football.

The club's men's team play at the third highest level of Finnish football, in the Kakkonen. The Club Chairman is Mikko Aminoff and the team is managed by Marko 'Pessi' Pesonen. The previous coach was Atik Ismail who has now moved to Jämsänkosken Ilves.

The Club has gained a good reputation for developing junior players. Young players are transferred to larger clubs in the transition to work or study in other locations.

PK-37 runs 2 men's teams along with 10 boys teams in a vibrant junior section.

PK-37 Men's Team are competing in Group C (Lohko C) of the Kakkonen administered by the Football Association of Finland (Suomen Palloliitto) . This is the third highest tier in the Finnish football system. In 2009 the team finished in eleventh position in their Kakkonen section.

PK-37 / 2 are participating in Section B (Lohko B) of the Nelonen administered by the Itä-Suomi SPL.

Current Squad for the 2014 Season