The PS General Slocum was a passenger steamboat built in Brooklyn, New York, in 1891. The General Slocum was named for Civil War General and New York Congressman Henry Warner Slocum. She operated in the New York City area as an excursion steamer for the next thirteen years under the same ownership. During her service history, she was involved in a number of mishaps, including multiple groundings and collisions.

On June 15, 1904, the General Slocum caught fire and sank in the East River of New York City.[1] At the time of the accident she was on a chartered run carrying members of St. Mark's Evangelical Lutheran Church (German Americans from Little Germany, Manhattan) to a church picnic. An estimated 1,021 of the 1,342 people on board died. The General Slocum disaster was the New York area's worst disaster in terms of loss of life until the September 11, 2001 attacks. It is the worst maritime disaster in the city's history.[2] The events surrounding the General Slocum fire were explored in a number of books, plays and movies.

General Slocum was powered by a single-cylinder, surface condensing vertical beam steam engine with 53 inch bore and 12 foot stroke, built by W. & A. Fletcher Company of Hoboken, New Jersey. Steam was supplied by two boilers at a working pressure of 52 psi.[5] The Slocum was a sidewheel boat. Each wheel had 26 paddles and was 31 feet (9.4 m) in diameter. Her maximum speed was about 16 knots (30 km/h). The ship was usually manned by a crew of 22, including Captain William H. Van Schaick and two pilots.

The General Slocum experienced a series of mishaps following her launch in 1891. Four months after her launching, she ran aground off Rockaway. Tugboats had to be used to pull her free.

A number of incidents occurred during 1894. On July 29, while returning from Rockaway with approximately 4,700 passengers, the Slocum struck a sandbar with enough force that her electrical generator went out. The next month, the Slocum ran aground off Coney Island during a storm. During this grounding, the passengers had to be transferred to another ship. In September 1894 the Slocum collided with the tug R. T. Sayre in the East River, with the General Slocum sustaining substantial damage to her steering.

In July 1898, another collision occurred when the Slocum collided with the Amelia near Battery Park. On August 17, 1901, while carrying what was described as 900 intoxicated Paterson anarchists, some of the passengers started a riot on board and tried to take control of the vessel. The crew fought back and kept control of the ship. The captain docked the ship at the police pier, and 17 men were taken into custody by the police. In June 1902 the General Slocum ran aground with 400 passengers aboard. With the vessel unable to be freed, the passengers had to camp out overnight while the ship remained stuck. 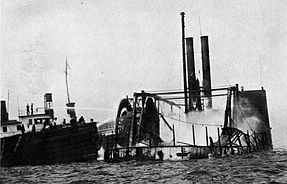 Firefighters working to put out the fire on the listing General Slocum
File:GeneralSlocum 05.jpg
Victims of the General Slocum washed ashore at North Brother Island

The General Slocum worked as a passenger ship, taking people on excursions around New York City. On Wednesday, June 15, 1904, the ship had been chartered for $350 by St. Mark's Evangelical Lutheran Church in the Little Germany district of Manhattan. This was an annual rite for the group, which had made the trip for 17 consecutive years, a period when German settlers moved out of Little Germany for the Upper East and West Sides. Over 1,400[lower-alpha 1] passengers, mostly women and children, boarded the Slocum, which was to sail up the East River and then eastward across the Long Island Sound to Locust Grove, a picnic site in Eatons Neck, Long Island.

The ship got underway at 9:30 a.m. As it was passing East 90th Street, a fire started in the Lamp Room[6] in the forward section, possibly caused by a discarded cigarette or match. It was fueled by the straw, oily rags, and lamp oil strewn around the room.[7] The first notice of a fire was at 10:00 a.m.; eyewitnesses claimed the initial blaze began in various locations, including a paint locker filled with flammable liquids and a cabin filled with gasoline. Captain Van Schaick was not notified until ten minutes after the fire was discovered. A 12-year-old boy had tried to warn him earlier but was not believed.

Although the captain was ultimately responsible for the safety of passengers, the owners had made no effort to maintain or replace the ship's safety equipment. The fire hoses had been allowed to rot, and fell apart when the crew tried to put out the fire. The crew had never practiced a fire drill, and the lifeboats were tied up and inaccessible. (Some claim they were wired and painted in place)[8] Survivors reported that the life preservers were useless and fell apart in their hands. Desperate mothers placed life jackets on their children and tossed them into the water, only to watch in horror as their children sank instead of floating. Most of those on board were women and children who, like most Americans of the time, could not swim; victims found that their heavy wool clothing absorbed water and weighed them down in the river.[8]

File:GeneralSlocum 06.jpg
Carrying away a body from North Brother Island

It has been suggested that the manager of the life preserver manufacturer placed iron bars inside the cork preservers to meet minimum weight requirements at the time. Many of the life preservers had been filled with cheap and less effective granulated cork and brought up to proper weight by the inclusion of the iron weights. Canvas covers, rotted with age, split and scattered the powdered cork. Managers of the company (Nonpareil Cork Works) were indicted but not convicted. The life preservers had been manufactured in 1891 and had hung above the deck, unprotected from the elements, for 13 years.[9]

Captain Van Schaick decided to continue his course rather than run the ship aground or stop at a nearby landing. By going into headwinds and failing to immediately ground the ship, he fanned the fire. Van Schaick later argued he was trying to avoid having the fire spread to riverside buildings and oil tanks. Flammable paint also helped the fire spread out of control.

Some passengers jumped into the river to escape the fire, but the heavy women's clothing of the day made swimming almost impossible and dragged them underwater to drown. Many died when the floors of the overloaded boat collapsed; others were battered by the still-turning paddles as they tried to escape into the water or over the sides.[10]

By the time the General Slocum sank in shallow water at North Brother Island, just off the Bronx shore, an estimated 1,021 people had either burned to death or drowned. There were 321 survivors. Five of the 40 crew members died. The captain lost sight in one eye owing to the fire. Reports indicate that Captain Van Schaick deserted the Slocum as soon as it settled, jumping into a nearby tug, along with several crew. Some say his jacket was hardly rumpled, but other reports stated that he was seriously injured. He was hospitalized at Lebanon Hospital.

There were many acts of heroism among the passengers, witnesses, and emergency personnel. Staff and patients from the hospital on North Brother Island participated in the rescue efforts, forming human chains and pulling victims from the water.

Eight people were indicted by a Federal grand jury after the disaster: the Captain; two inspectors; and the president, secretary, treasurer and commodore of the Knickerbocker Steamship Company. Only Captain Van Schaick was convicted. He was found guilty on one of three charges: criminal negligence, for failing to maintain proper fire drills and fire extinguishers. The jury could not reach a verdict on the other two counts of manslaughter. He was sentenced to ten years imprisonment. He spent three years and six months at Sing Sing prison before he was paroled. President Theodore Roosevelt declined to pardon Captain Van Schaick. He was not released until the federal parole board under the William Howard Taft administration voted to free him on August 26, 1911.[11] He was pardoned by President Taft on December 19, 1912.[12] After his death in 1927, Schaick was buried in Oakwood Cemetery (Troy, New York).

The Knickerbocker Steamship Company, which owned the ship, paid a relatively small fine despite evidence they might have falsified inspection records. The sunken remains of the General Slocum were recovered and converted into a barge, which sank in a storm in 1911.

The disaster motivated federal and state regulation to improve the emergency equipment on passenger ships.

The neighborhood of Little Germany, which had been in decline for some time before the disaster as residents moved uptown,[13] almost disappeared afterward. With the trauma and arguments that followed the tragedy and the loss of many prominent settlers, most of the Lutheran Germans remaining in the Lower East Side eventually moved uptown. The church whose congregation chartered the ship for the fateful voyage was converted to a synagogue in 1940 after the area was settled by Jewish residents.

The victims were interred in cemeteries around New York, with fifty-eight identified victims buried in the Cemetery of the Evergreens in Brooklyn.[14] Several were buried at Lutheran Cemetery in Middle Village, Queens (now Lutheran All Faiths Cemetery). An annual memorial ceremony is held at the historical marker.[15]

In 1906, a marble memorial fountain was erected at Tompkins Square Park on Manhattan by the Sympathy Society of German Ladies, with the inscription: "They are Earth's purest children, young and fair."[16]

On January 26, 2004, the last surviving passenger from the General Slocum, Adella Wotherspoon (née Liebenow), died at the age of 100. At the time of the disaster she was a six-month-old infant. Wotherspoon was the youngest survivor of the tragedy that took the lives of her two older sisters. When she was one year old she unveiled the Steamboat Fire Mass Memorial on June 15, 1905, at Lutheran All Faiths Cemetery, in Middle Village, Queens.[17] Before Wotherspoon's death, the previous oldest survivor was Catherine Connelly (née Uhlmyer) (1893–2002) who was eleven years old at the time of the accident.