Paavo Ruotsalainen (9 July 1777 – 27 January 1852) was a Finnish farmer and lay preacher who became the leader of the revivalist Awakening religious movement in Finland.

Born in Tölvänniemi (now a part of Lapinlahti) as the oldest son of plain farmers, he received his first bible at age six. At the time of his confirmation he had already read it three times. His preoccupation with the words of the bible gained him the nickname foolish Paavo. When he heard about the lay pastor Jakob Högman in Jyväskylä, he immediately walked the 200 km to Jyväskylä in the winter of 1799. This visit laid the foundation of his religious life.

Jakob Högman was known as an avid reader of a revivalist devotional booklet "Kallis Hunajan Pisara" (The Choice Drop of Honey).[1] He gave Paavo Ruotsalainen a copy of the book which remained important to Paavo throughout his life. Högman illustrated to Paavo that there was one thing of utmost importance he was missing: the utmost spiritual poverty where only Christ could bring mercy.

Ruotsalainen never received formal education in theology, but he managed to encapsulate and develop the central ideas of Lutheranism in response to the harsh northern environment and accelerating change of the society. The core of his teaching was that in the spiritual life one can only be the receiver of God's mercy, never a subject. One must only abide and yearn for God to reveal himself. Paavo Ruotsalainen's thinking was a curious mixture of old folk wisdom, theology and old Christian tradition. His thinking was fresh and original but also vehement and harsh.

Ruotsalainen emphasized truthfulness and extreme introspection. In his opinion it is better for a person under God's sight to admit the lack or even total absence of faith than to force a religious conviction. However, his advice for the searching soul was to turn to God whatever the feelings are. In the midst of sorrow and despair one must continue crying for God, and God will answer in his own way. Paavo Ruotsalainen aligned himself with old Christian God-centred theological tradition which focuses on who God is and how God acts rather than religious traditions that focus the spiritual life of the believer. In Paavo Ruotsalainen's view, believing is something that is impossible for a human. Faith is a gift of God.

He was an ardent opponent of narrow-minded sectarians who emphasized a strict code of conduct as integral to a chaste Christian life. 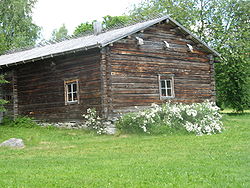 The original homestead of Paavo Ruotsalainen in Aholansaari, Nilsiä

Paavo Ruotsalainen became the leader of the revivalist movement called herännäisyys (Awakening) in Finland. He traveled around Finland to meet with other members of the movement, most notably the priests Jonas Lagus and Nils Gustav Malmberg in Ostrobothnia. It is estimated that he traveled 40,000 km altogether, most of it on foot. With the spreading of the movement, both church and state authorities became worried about it. In 1838/39 he was put on trial and fined, yet this could not stop the movement.

In 1975 Ruotsalainen became the subject of The Last Temptations, an opera by Joonas Kokkonen. The libretto of the opera was written by Lauri Kokkonen who had earlier written a play with the same title.