Masterfully designed canoes of many sizes and forms were made on the Pacific Northwest coast of North America. They were the main form of transportation for the indigenous people of the area until long after European colonisation. In recent years, the craft of canoe-making has been revived, and a few have been built by a number of the native nations. Like those made in traditional times, they have proved eminently seaworthy. 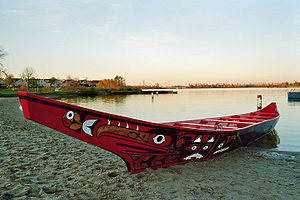 The canoes are made by carving from solid logs, usually of red cedar but in some areas of Sitka spruce or cottonwood. Typically these boats were widened beyond the original diameter of the log by the spreading of the steam-softened sides. Spreading does more than widen the canoe; it introduces major changes of form throughout the hull which the canoemaker must anticipate in carving the log. The straight and level gunwales bend smoothly out and down, while the ends rise, forming a graceful sheer and transforming a rigidly narrow, hollow trough into an elegant watercraft.

In order to spread without splitting, the walls of the hull are made remarkably thin. When the hull is completely carved, water is poured into it to a depth of six inches or so, and heated to boiling with red-hot rocks. The resulting steam is confined by covering the open hull with mats. The hot rocks are replaced as needed to keep the water at a boil. The softened sides, heated through by the steam inside and fires outside, begin to move outward, aided by the weight of water and rocks pressing down in the centre. Spreading sticks are tapped into place between the gunwales, and are moved towards the ends and increased in length in the centre as the sides flare outward. When the planned beam and form are reached, the canoe is allowed to cool, the water is removed, and the thwarts, bow and stern blocks, and gunwale caps are fitted and fastened in place.

Large travelling and war canoes were often painted with designs associated with the names of the canoes or the crests of the owners.

The canoes were used for transport up and down the coast. They were used for trade, as war canoes, and in competitions. Emily Carr, who grew up in the early days of Victoria, British Columbia, describes a regatta in which the Indian races were the highlight. The canoes, of ten paddlers and a steersman acting as coxswain, "flash[ed] through their races like running fire." The Kloochman ("wife" in Chinook Jargon) was "an even grander race" than the men's, with the women giving "every scrap of themselves to the canoe", working in complete unity[1]

The Haida of Haida Gwaii reputedly made the biggest ones - some 60 feet (18 metres) long.[2]

n 1937 Betty Lowman Carey (born July 31, 1914) became the first woman to singlehandedly row the Inside Passage of British Columbia in a dugout canoe. In 1978 Geordie Tocher and two companions sailed a 3½ ton, 40 foot (12 metre) dugout canoe (the "Orenda II"), made of Douglas Fir, and based on Haida designs (but with sails), from Vancouver, Canada to Hawaii to add credibility to stories that the Haida had travelled to Hawaii in ancient times. Altogether they travelled some 4,500 miles (7,242 km) after two months at sea.[3][4]