From Infogalactic: the planetary knowledge core
Jump to: navigation, search
Not to be confused with University of the Pacific.
For the university in India, see Pacific University (India).

Pacific University is a private university located in Oregon, United States. The first campus began more than 160 years ago and is located about 23 miles (37 km) west of Portland in Forest Grove. Pacific University has four campuses within Oregon in the cities of Forest Grove, Eugene, Hillsboro and Woodburn.

Established as Tualatin Academy in 1849, the school has an enrollment of more than 3,500 students.[3] Founded by the United Church of Christ (UCC), the university's motto is Pro Christo et Regno Ejus, which is Latin for "For Christ and His Kingdom." Although the university has long been independent of the UCC, it still maintains a close working relationship with the church as a member of the United Church of Christ Council for Higher Education.[4] The university is now a small private, independent liberal arts school, offering graduate programs in education, optometry, writing, health professions and business.[5]

Tabitha Brown, a pioneer emigrant from Massachusetts, immigrated to the Oregon Country over the new Applegate Trail in 1846.[6] After arriving in Oregon she helped to start an orphanage and school along with Rev. Harvey L. Clark in Forest Grove in 1847 to care for the orphans of Applegate Trail party.[6][7][8] In March 1848, Tualatin Academy was established from the orphanage with Clark donating 200 acres (80.9 ha) to the school.[8] George H. Atkinson had advocated the founding of the school and with support of the Presbyterians and Congregationalists helped to start the academy.[7] Eliza Hart Spalding, part of the Whitman Mission, was its first teacher.[citation needed] 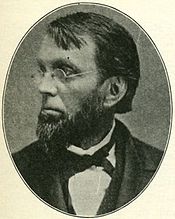 The academy was officially chartered by the territorial legislature on September 29, 1849.[7][9] The reverend Clark served as the first president of the board of trustees and later donated an additional 150 acres (60.7 ha) to the institution.[9] In 1851, what is now Old College Hall was built and in 1853 Sidney H. Marsh became the school's first president.[7] The current campus was deeded in 1851.[10] In 1854, the institution became Pacific University.[8] The first commencement occurred in 1863 with Harvey W. Scott as the only graduate.[7]

In 1872, three Japanese students started at the university as part of that country's modernization movement, with all three graduating in 1876.[7] These students were Hatstara Tamura, Kin Saito, and Yei Nosea.[7] President Marsh died in 1879 and was replaced by John R. Herrick.[9] In the late 1890s an alumnus gave Pacific a Chinese statuette. The statuette was purchased from a Chinese family who used it as a sort of coat of arms. It appears to be a mix of a several different mythical creatures although it is often simply called a "dragon dog" and serves as the foundation for the university's mascot, the Boxer.[11]

Marsh Hall was built in 1895 and named for Pacific's first president, serving as the central building on Pacific's campus. Carnegie Library (now Carnegie Hall) opened in 1912 after Andrew Carnegie's foundation helped finance the brick structure.[12] The library was designed by Portland architecture firm Whidden and Lewis.[13] In 1915, the preparatory department, Tualatin Academy, closed due to the proliferation of public high schools in the state.[9] By 1920, the school had grown to a total of five buildings on 30 acres (12.1 ha) and had an endowment of approximately $250,000.[9]

Marsh Hall was gutted by fire in 1975, but its shell was preserved, and the structure reopened in 1977. Dr. Phillip D. Creighton became Pacific's sixteenth president in August 2003 and retired in June 2009.[14] Tommy Thayer, lead guitarist of the band KISS was elected to the university's board of trustees in 2005.[15] Pacific's seventeenth president, Dr. Lesley M. Hallick, was named on May 19, 2009.[16] 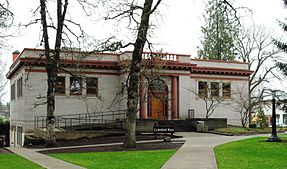 Pacific University is located on four campuses in the state of Oregon in the cities of Forest Grove, Hillsboro, Eugene and Woodburn.[17]

The Forest Grove Campus features several historic buildings. Old College Hall is the oldest educational building west of the Mississippi and today serves as Pacific University’s museum.[18] Carnegie Hall, the university’s first dedicated library building, was constructed in 1912 and today is home to the undergraduate Psychology Department.[19] Marsh Hall, at the center of campus, houses several classrooms and faculty offices, in addition to administrative offices and a small auditorium. The Forest Grove Campus opened a new residence hall, Cascade Hall, in 2014.[20] The Forest Grove Campus also is home to a new university library, which was built and earned Leadership in Energy and Environmental Design (LEED) certification in 2005, the LEED-certified Berglund Hall,[21] which houses the College of Education and a community preschool, and the additional LEED Gold certified residence halls, Burlingham and Gilbert.[22] The Bill & Cathy Stoller Center is home to all of the university’s intercollegiate athletic teams, athletic offices and the Department of Exercise Science. It features more than 95,000 square feet of floor space, including team rooms, locker rooms, classrooms, a wood-floor gymnasium, a weight and fitness center and the Fieldhouse, the first indoor practice area in the Northwest Conference and the only one with FieldTurf.[23] Outside the Stoller Center is the entrance to Hanson Stadium, which includes a FieldTurf soccer, lacrosse and football surface, a nine-lane track and grandstands.[24] A new roof was built to cover the stadium grandstands in 2014.[25] The stadium is part of the Lincoln Park Athletic Complex, built in 2008, which also houses the baseball complex, Chuck Bafaro Stadium at Bond Field, the softball complex, Sherman/Larkins Stadium, and natural grass fields for soccer and track throwing events, and is part of the City of Forest Grove's Lincoln Park, also home to a fitness trail, playground equipment, a BMX course, a skateboard park and picnic areas.[26]

The Hillsboro Campus opened in 2006 with its first building, a five-story Leadership in Energy and Environmental Design (LEED) gold certified building in Hillsboro in 2006,[27] which was dedicated as Creighton Hall.[28] A second building, known as HPC2 and also LEED certified, opened in 2010.[29] The campus is part of the Hillsboro Health & Education District and is adjacent to the MAX light rail line. Currently home primarily to Pacific University’s College of Health Professions, the campus houses several master’s and doctorate-level programs in health professions, as well as clinics, open to the public, for audiology, dental hygiene, physical therapy and professional psychology, as well as an interdisciplinary diabetes clinic and an eye clinic run by the Pacific University College of Optometry. Virginia Garcia Memorial Health Center also has a clinic and pharmacy on site.[30]

180° panorama of the campus in Forest Grove

Pacific University is consistently named among the top regional colleges and universities in the west by U.S. News & World Report, Forbes and The Princeton Review. [31][32][33]

Pacific is home to the colleges of Arts & Sciences, Education, Optometry, Health Professions and Business. Approximately half of all students are undergraduates, while the other half are graduate and professional students.[3]

The College of Arts & Sciences offers undergraduate liberal arts and sciences programs in more than 50 fields, as well as a low-residency master’s of fine arts in writing.[34] The MFA program has been ranked by Poets & Writers magazine as one of the top five low-residency MFA programs in the United States for four consecutive years.[35] Pacific also opened a master of social work program based in Eugene, Ore., in 2014.[36]

Pacific’s College of Education offers undergraduate and graduate degrees in education and learning. Undergraduates may study early childhood education and elementary education, while graduate programs include MAT/MAT Flex, MAT Special Education and MEd in Curriculum Studies, as well as a joint program with the College of Optometry, visual function in learning.[37] The College of Education offers programs for science and math teachers at its Woodburn Campus.[38] A new School of Communication Sciences and Disorders began offering a master’s in speech-language pathology in 2012.[39]

The College of Health Professions was founded in 2006, though several of its programs date back further. Most courses and clinics are located on the Hillsboro campus. Programs include a doctorate of audiology, master’s of athletic training, bachelor’s in dental health science, graduate certificate in gerontology, master’s in healthcare administration, graduate certificate in healthcare compliance, online bachelor's in health science, doctorate in occupational therapy, doctorate in pharmacy, doctorate in physical therapy, master’s in physician assistant studies, and master’s and doctorates in professional psychology. Curricula in all health professions programs focuses on interprofessional cooperation, and students gain practice in caring for underserved populations.[30]

Pacific's newspaper, The Pacific Index, was first published in 1893. The next year an annual yearbook began as the Heart of Oak.

All of the Greek societies at Pacific University are "local", meaning that they are unique to the campus.[43]

Pacific University competes as a member of the Northwest Conference in the NCAA Division III. Pacific was one of the founding members of the conference in 1926.

Pacific's women's wrestling program is one of just five varsity programs sponsored by a college in the United States.[44] The team competed as part of the women's division of the National Collegiate Wrestling Association, which began competition in 2007.

In addition to the amenities of the Stoller Center and Lincoln Park Athletic Complex, Pacific University also has indoor and outdoor tennis courts [45] on campus and shares a competition-size pool with the City of Forest Grove.[46]

A. C. Gilbert as a young fraternity man at Pacific University in 1902