listen))[2] is a city in eastern North Rhine-Westphalia, Germany, capital of the Paderborn district. The name of the city derives from the river Pader and 'born', an old German term for the source of a river. The river Pader originates in more than 200 springs near Paderborn Cathedral, where St. Liborius is buried.

Paderborn was founded as a bishopric by Charlemagne in 795, although its official history began in 777 when Charlemagne built a castle near the Pader springs.[3] In 799 Pope Leo III fled his enemies in Rome and reached Paderborn, where he met Charlemagne, and stayed there for three months. It was during this time that it was decided that Charlemagne would be crowned emperor. Charlemagne reinstated Leo in Rome in 800 and was crowned as Holy Roman Emperor by Leo in return. In 836, St. Liborius became the patron saint of Paderborn after his bones were moved there from Le Mans by Bishop Badurad.[4] St. Liborius is commemorated in Paderborn every year in July with the Liborifest.

The bishop of Paderborn, Meinwerk, became a Prince of the Empire in 1100. The bishop had several large buildings built, and the area became a place for the emperors to stay.[3]

The city was taken by Prussia in 1802, then by the French vassal state Kingdom of Westphalia from 1807 to 1813 and then returned to Prussia.

Native Friedrich Sertürner, a pharmacist's apprentice in Paderborn, was the first to isolate morphine from opium in 1804.

In 1930, the See of Paderborn was promoted to archdiocese.

During World War II, Paderborn was bombed by Allied aircraft in 1944 and 1945, resulting in 85% destruction, including many of the historic buildings. It was seized by the US 3rd Armored Division after a pitched battle 31 March - 1 April 1945, in which tanks and flamethrowers were used during combined mechanized-infantry assaults against the city's southwestern, southern and southeastern approaches.[5]

After the city was reconstructed in the 1940s and 1950s, Paderborn became a major industrial seat in Westphalia.[4] The British Army has retained a significant presence in the area, and uses the nearby Sennelager Training Area. 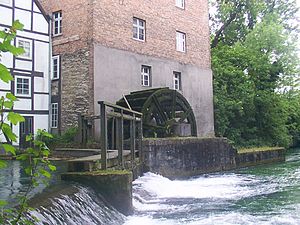 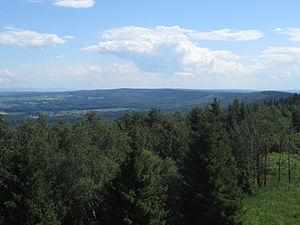 The city of Paderborn consists of the following Stadtteile:

Paderborn has a population of over 144,000, of which approximately 10% are students at the local university. Additionally, about 10,000 members or relatives of members of the British armed forces live within Westfalen Garrison, but are not included in the nominal population size.

Paderborn is the headquarters of the former Nixdorf Computer AG, which was acquired by Siemens in the early 1990s and known as Siemens-Nixdorf for about 10 years. The company is now known as Wincor Nixdorf which is still located in Paderborn, but Siemens retains a considerable presence in the city.

Many other information technology companies as well as industrial enterprises are located in Paderborn, too:

Paderborn is also home of the "Paderborner" brewery, which has belonged to the Warsteiner group since 1990.

Paderborn has the largest computer museum in the world, the de:Heinz Nixdorf MuseumsForum. From 2001 to 2005 it hosted the de (RoboCup German Open).

The town supports the Nordwestdeutsche Philharmonie for regular symphony concerts in the Paderhalle.

The city is known today for its exhibitions in three museums: the Kaiserpfalz, The Diocesian Museum and the Art Museum - Städtische Galerie.[6]

Paderborn is twinned with:

The Paderborn Baskets played in the playoffs of the 2008-09 German basketball league.

SC Paderborn 07 is a German football club based in Paderborn. Promoted from the 2. Bundesliga due to a very successful 2013/2014 campaign, the team advanced to the Bundesliga, Germany's top flight, but remained there for just one year.

The club was formed out of the 1985 merger of FC Paderborn and TuS Schloß Neuhaus as TuS Paderborn-Neuhaus and took on its current, shorter name in 1997. The Neuhaus club was founded in 1907 as SV 07 Neuhaus which was joined by the local side TuS 1910 Sennelager to become TuS Schloss Neuhaus in 1970. The Neuhaus and Paderborn teams played as tier III sides for most of their histories, as has the unified club. Today Paderborn plays its home matches at the Benteler Arena. 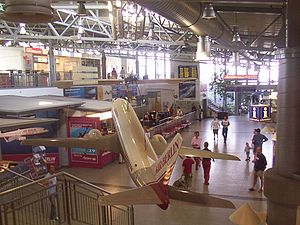 The main station is a regular stop for the InterCity on the Hamm–Warburg line and several local trains.

The Paderborn Lippstadt Airport connects Paderborn to the bigger German airports and offers flights to many locations in Europe. There is a bus shuttle between the airport and the Paderborn main train station. General Aviation and gliders are based at Paderborn-Haxterberg (site of the world gliding championships in 1981).

In Paderborn there is a bus system served by the PaderSprinter for local buses and the Bahnbus Hochstift for regional buses.

Paderborn was once the oldest academic site in Westphalia. In 1614, the University of Paderborn was founded by the Jesuits but was closed in 1819. It was re-founded in 1972 as Universität-Gesamthochschule and transformed into a university in its own right in 2002. Today, it is attended by about 20,000 students.

Additionally, there are several theological and private academic institutes in Paderborn.

There are a number of grammar schools in the city, the most prominent of which are the Theodorianum and St. Michael Gymnasium, along with others such as the Goerdeler-Gymnasium. There are also a few British primary schools such as John Buchan School, which is located in Sennelager and mainly educates children of British military personnel and the garrison's employees.