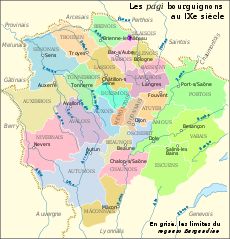 In the later Western Roman Empire, following the reorganization of Diocletian, a pagus (compare French pays, Spanish pago, "a region, terroir") became the smallest administrative district of a province. By that time the word had long been in use with various meanings. Smith's Dictionary says of it, "The meaning of this word cannot be given in precise and absolute terms, partly because we can have no doubt that its significance varied greatly between the earliest and the later times of Roman history, partly because of its application by Latin writers to similar, but not identical, communities outside Italy ..."[1]

Pāgus is a native Latin word from a root pāg-, a lengthened grade of Indo-European *pag-, a verbal root, "fasten" (English peg), which in the word may be translated as "boundary staked out on the ground."[2] In semantics, *pag- used in pāgus is a stative verb with an unmarked lexical aspect of state resulting from completed action: "it is having been staked out," converted into a noun by -us, a type recognizable in English adjectives such as surveyed, defined, noted, etc. English does not use the noun: "the surveyed," but Latin characteristically does. Considering that the ancients marked out municipal districts with boundary stones, the root meaning is nothing more than land surveyed for a municipality with stakes and later marked by boundary stones, a process that has not changed over the millennia.

Earlier hypotheses concerning the derivation of pāgus suggested that it is a Greek loan from either πήγη, "village well," or πάγος, "hill-fort." William Smith opposed these on the grounds that neither the well nor the hill-fort appear in the meaning of pāgus.[1]

In classical Latin, pagus referred to a country district or to a community within a larger polity;[3] Julius Caesar, for instance, refers to pagi within the greater polity of the Celtic Helvetii.[4]

The pagus and vicus (a small nucleated settlement or village) are characteristic of pre-urban organization of the countryside. In Latin epigraphy of the Republican era, pagus refers to local territorial divisions of the peoples of the central Apennines and is assumed to express local social structures as they existed variously.[5]

As an informal designation for a rural district, pagus was a flexible term to encompass the cultural horizons of "folk" whose lives were circumscribed by their locality: agricultural workers, peasants, slaves. Within the reduced area of Diocletian's subdivided provinces, the pagani could have several kinds of focal centers. Some were administered from a city, possibly the seat of a bishop; other pagi were administered from a vicus that might be no more than a cluster of houses and an informal market; yet other pagi in the areas of the great agricultural estates (latifundia) were administered through the villa at the center.

The historian of Christianity Peter Brown has pointed out that in its original sense paganus meant a civilian or commoner, one who was excluded from power and thus regarded as of lesser account; away from the administrative center, whether that was the seat of a bishop, a walled town or merely a fortified village, such inhabitants of the outlying districts, the pagi, tended to cling to the old ways and gave their name to "pagans"; the word was used pejoratively by Christians in the Latin West to demean those who declined to convert from the traditional religions of antiquity.[6]

The pagus survived the collapse of the Empire of the West, retained to designate the territory controlled by a Merovingian or Carolingian count (comes). Within its boundaries, the smaller subdivision of the pagus was the manor. The majority of modern French pays are roughly coextensive with the old counties (e.g., county of Comminges, county of Ponthieu, etc.) To take an instance, at the beginning of the 5th century, when the Notitia provinciarum was drawn up, the Provincia Gallia Lugdunensis Secunda formed the ecclesiastical province of Rouen, with six suffragan sees; it contained seven cities (civitates). For civil purposes, the province was divided into a number of pagi: the civitas of Rotomagus (Rouen) formed the pagus Rotomagensis (Roumois); in addition there were the pagi Caletus (Pays de Caux), Vilcassinus (the Vexin), the Tellaus (Talou); Bayeux, the pagus Bajocassinus (Bessin), and the Otlinga Saxonia; that of Lisieux the pagus Lexovinus (Lieuvin); that of Coutances the p. Corilensis and p. Constantinus (Cotentin); that of Avranches the p. Abrincatinus (Avranchin); that of Sez the p. Oximensis (Hiémois), the p. Sagensis and p. Corbonensis (Corbonnais); and that of Evreux the p. Ebroicinus (Evrecin) and p. Madriacensis (pays de Madrie) (EB "Normandy").

The pagus was the equivalent of what English-speaking historians sometimes refer to as the "Carolingian shire", which in German is the Gau. In Latin texts, a canton of the Helvetic Confederacy is rendered pagus.