Pahawh is written left to right. Each syllable is written with two letters, an onset (la, an initial consonant or consonant cluster) and a rime (yu, a vowel, diphthong, or vowel plus final consonant).[1] However, the order of these elements is rime-initial, the opposite of their spoken order. (That is, each syllable would seem to be written right to left, if it were transcribed literally into the Roman alphabet.) This is an indication that Shong conceived of the rimes as primary; Pahawh Hmong might therefore be thought of as a vowel-centered abugida. Tones and many onsets are distinguished by diacritics.

The onset k is not written, so that a rime letter (V) written by itself is read as kV. Nor is the rime au (on mid tone) written, so that an onset letter (C) written by itself is read Cau, except following a bare rime, as otherwise these could be read as a single syllable. The absence of an onset, however, is indicated with a null-onset letter. Again, this is similar to an abugida, but with the roles of consonant and vowel reversed.[2]

For an example of the positional variation, consider the phrase (in RPA orthography) kuv rau tshais rau koj noj "I serve you breakfast". Since the first word, kuv, starts with a k, it is written as the bare rime uv in Pahawh. The word rau, with mid-tone au as the rime, is normally written as a bare onset r, and indeed this is the case for the second instance in this sentence. However, since the first rau follows a bare rime, it cannot be written as a bare onset r, or the combination might be read as ruv rather than kuv rau. Therefore, the combination kuv rau is written uv rau rather than uv r, with the rime au made explicit (Smalley et al. 1990:58).

Pahawh onsets. Except for the null onset series at lower right, these are consistent for stages 2–4. Row 3 reads l-, dl-, dlh- in Hmong Njua.

Pahawh rimes, stage 2. The tone diacritics are irregular. Note that -v tone is sometimes written with the left-hand rime glyph, sometimes with the right. In stage 3, it is consistently written with the right-hand glyph, and all tones have the diacritics of koo above: [left glyph] -b none, -m dot, -j macron; [right glyph] -v none, - dot, -s macron, -g trema. When used, -d tone takes the left-hand glyphs with a stroke ⟨'⟩ diacritic. The ia and a rows may be read a and aa in Hmong Njua.

Pahawh has twenty onset letters to transcribe sixty phonemic onsets. This is accomplished with two diacritics, a dot and a tack, written above the onset. However, although there is some scattered similarity between the sounds of the resulting forms, there is no overall pattern to the system. For example, the letter for h with a dot is pronounced th, and with a tack is pronounced pl. The null consonant does not take diacritics in Hmong Daw, but does in Hmong Njua, for two onsets, ndl and ndlh, which only occur in Hmong Njua. (Similarly, Daw d and dh, which do not occur in Njua, are used for Njua dl and dlh, which do not occur in Daw.)

The rimes, in contrast, are over-specified. There are thirteen rime sounds, but twenty-six letters to represent them. One of each pair takes four of the eight tones, while the other takes the other four tones. Diacritics (none, dot, macron, and trema) distinguish the tones that each rime letter may carry. One of the tones, written -d in RPA, is not phonemic but is a prosodic unit-final allophone of the creaky register -m. It may be written in Pahawh by changing the dot diacritic to a short stroke, but it is not used by many people.

Shong used the rimes with the values kiab and kab in Hmong Daw for kab and kaab (/káŋ/) in Hmong Njua. However, Cwjmem retains the Daw values for Njua and adds a pipe (|) to the left of kab etc. to write kaab etc.

In addition to phonetic elements, Pahawh Hmong has a minor logographic component, with characters for

Punctuation is derived from the Roman alphabet, presumably through French or Lao,[3] except for a sign introduced by one of Shong's disciples that replaced Shong's ⟨!⟩, but also includes a native sign for reduplication and a native cantillation mark.

There are two orthographic systems in use for Pahawh Hmong, the second reduced stage from 1965 and the third reduced stage from 1970 (see history, below). Some Hmong communities consider second stage to be more authentic, while others prefer third stage as more regular. It would appear that stage two is more widespread.

The differences are primarily in tone assignment. Bare rimes—that is, rime letters without a tone diacritic—have various values in stage two, but are regularly high tone (-b) or rising tone (-v) in stage three. Likewise, although the pedagogic charts are organized so that each column corresponds to a single tone, the tonic diacritics are scattered about the columns in stage two, but correspond to them in stage three. (Stage 4, which today is only used for shorthand, dispenses with the -v rime letters, replacing them with additional diacritics on the -b rime letters, so that each rime and tone has a single dedicated glyph.)

Tone transcription is that of the Romanized Popular Alphabet. 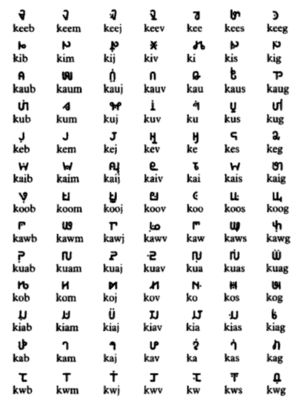 Pahawh Hmong was the product of a native messianic movement, based on the idea that, throughout history, God had given the Hmong power through the gift of writing, and revoked it as divine retribution.[citation needed]

In 1959 Shong Lue Yang (Soob Lwj Yaj), a Hmong spiritual leader from Laos, created Pahawh. Yang was not previously literate in any language.[4] An illiterate peasant, Shong claimed to be the Son of God, messiah of the Hmong and Khmu people, and that God had revealed Pahawh to him in 1959, in northern Vietnam near the border with Laos, to restore writing to the Hmong and Khmu people. Over the next twelve years he and his disciples taught it as part of a Hmong cultural revival movement, mostly in Laos after Shong had fled Communist Vietnam. The Khmuic version of the script never caught on, and has disappeared. Shong continually modified the Hmong script, producing four increasingly sophisticated versions, until he was assassinated by Laotian soldiers in 1971 to stop his growing influence as part of the opposition resistance. Knowledge of the later stages of Pahawh come to us through his disciple Chia Koua Vang, who corresponded with Shong in prison. 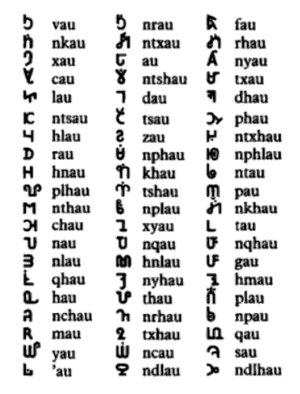 Stage 1 was abandoned after Shong revealed the second stage, with only the occasional glyph showing up when people who know it write using other versions. However, it is not considered obsolete, as people remember Shong's instructions to use this source of all later Pahawh as a sacred script.

Pahawh is not as widespread as RPA romanization for writing Hmong, partially because of the difficulties in typesetting it, but it is a source of great pride for many Hmong who do not use it, as in Southeast Asia every respectable language has a script of its own, which RPA does not provide.[citation needed] However, for some educated Hmong, Pahawh is considered an embarrassing remnant of a superstitious past (Smalley et al. 1990:165).

Because Shong was illiterate, it is sometimes assumed that he invented Pahawh ex nihilo. However, Shong was acutely aware of writing and of the advantages that it provided; indeed, that was the basis of his messianic movement. It would appear that existing scripts provided his inspiration, even if he did not fully understand them, much as the Roman alphabet inspired the illiterate Sequoyah when he invented the Cherokee script, in a process called trans-cultural diffusion. Not only do the forms of the majority of the letters in the oldest stage of Pahawh closely resemble the letters of the local Lao alphabet and missionary scripts such as Pollard and Fraser, though they are independent in sound value (much like the relationship between Roman and Cherokee), but the appearance of vowel and tone diacritics in those scripts, which would appear nearly random to the illiterate, may explain the idiosyncratic use of diacritics in early Pahawh. Nevertheless, even if the graphic forms of Pahawh letters derive from other scripts, much of the typology of the script, with its primary rimes and secondary onsets, would appear to be Shong's invention.

The later stages of Pahawh became typologically more like Lao and the Roman alphabet, suggesting that perhaps they influenced its evolution. However, even from the start, Pahawh is "fascinatingly similar [...] and fascinatingly different" from the Lao alphabet (Smalley et al. 1990:90). For example, it resembles an abugida such as Lao where the order of writing does not reflect the order of speech, but with the roles of consonant and vowel reversed. There is an inherent vowel, as in Lao, though only on one tone, but also an inherent consonant. In Lao, tone depends on the consonant; it is modified with diacritics, but the patterns of modification are complex. In early Pahawh, tone depends on the rime and is modified with irregular diacritics. Starting with stage 2, there are two tone-classes of rime, just as in Lao there are two tone-classes of consonant.

Nearly all other scripts invented by illiterates are syllabaries like Cherokee. However, to represent Hmong as a syllabary, Pahawh would have needed 60×91 = 5460 letters. By breaking each syllable in two in the fashion of Chinese phonetics, Shong was able to write Hmong, in his original version, with a mere 60+91 = 151 letters.

The Pahawh Hmong alphabet was added to the Unicode Standard in June 2014 with the release of version 7.0.