From Infogalactic: the planetary knowledge core
Jump to: navigation, search
Not to be confused with Paynton or Painton, Missouri.

Paignton /ˈpeɪntən/ is a seaside town on the coast of Tor Bay in Devon, England. Together with Torquay and Brixham it forms the unitary authority of Torbay which was created in 1998. The Torbay area is a holiday destination known as the English Riviera. Paignton's population in the United Kingdom Census of 2011 was 49,021.[1] It has origins as a Celtic settlement and was first mentioned in 1086. It grew as a small fishing village and a new harbour was built in 1847. A railway line was opened to passengers in 1859 creating links to Torquay and London. As its population increased, it merged with the villages of Goodrington and Preston.

Paignton is mentioned in the Domesday Book of AD 1086. Formerly written Peynton and Paington, the name is derived from Paega's town, the original Anglo-Saxon settlement. Paignton was given the status of a borough having a market and fair in 1294.[2]

Paignton was a small fishing village until the 19th century, when in 1837 the Paington [sic] Harbour Act led to the construction of a new harbour and the modern spelling, Paignton, first appeared. The historic part of Paignton is centred on Church Street, Winner Street and Palace Avenue which contain fine examples of Victorian architecture. Kirkham House is a late medieval stone house which is open to the public at certain times of year.[3] The Coverdale Tower adjacent to Paignton Parish Church is named after Bishop Miles Coverdale, who published an English translation of the Bible in 1536. Coverdale was Bishop of Exeter between 1551 and 1553 and is reputed to have lived in the tower although this is doubted by modern historians.[2] 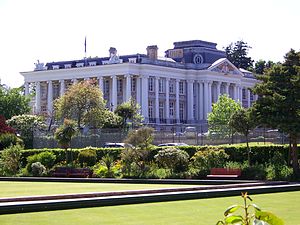 The railway line to Paignton was built by the Dartmouth and Torbay Railway, and opened to passengers on 2 August 1859, providing Torquay and Paignton with a link to London.

The Paignton Pudding, first made in the 13th century, is the origin of the nickname pudden eaters for the people of Paignton. The puddings were made infrequently and were of great size. When thousands turned up hoping to obtain a piece of a huge pudding that had been baked to celebrate the arrival of the railway[4] chaos occurred and the event became notorious. A Paignton Pudding was baked in 1968 to celebrate the town's charter, and another baked in 2006 to mark the 200th anniversary of the birth of the engineer, Isambard Kingdom Brunel.

Oldway Mansion is a large house and gardens constructed in the 1870s for Isaac Merritt Singer, who had amassed a considerable fortune with his improvements to the sewing machine. The building was occupied by Torbay Council[5] until an agreement was signed in September 2012 to develop the site into a hotel and retirement apartments.[6] Other Singer legacies in Paignton include the Palace Hotel and the Inn on the Green, which were built as homes for Singer's sons Washington and Mortimer.

Torquay Tramways were extended into Paignton in 1911 but the network was closed in 1934.[7]

As Paignton's population grew, it merged with the coastal villages of Goodrington and Preston. The town was governed by an urban district council until 1968, when the creation of Torbay Council led to a single body covering Torquay, Paignton and Brixham. The unitary authority formed in 1998 now handles all local government for Torbay, which has a directly elected mayor and 36 councillors. They are elected every four years. The Mayor chooses nine councillors to form the Cabinet. The Chairman of Torbay Council wears the chain of office.[9] The first elected mayor was Nick Bye, elected in 2005. In 2011 Gordon Oliver became the second.[10] Most of Paignton is in the Torbay constituency, with Kevin Foster the incumbent Conservative MP. Some areas in the southern and western parts of the town are in the Totnes constituency represented by Sarah Wollaston. In the European elections, the United Kingdom Independence Party topped the poll in Torbay with 34.4% of the vote.[11]

Paignton's economy relies extensively on tourism and the town is marketed as a location for family holidays. The main seafront area is dominated by Paignton Pier,[12] a 780-foot (240 m) long structure opened in 1879. It was designed by George Soudon Bridgman, the local architect who also designed the original Oldway Mansion. The Festival Theatre, opened in 1967, was once a seafront theatre capable of staging large summer shows. In 1999 it was converted into a multiscreen cinema. Regatta Week during early August is the peak holiday season. During this period there is a funfair on Paignton Green, along with a large fireworks display. Later in August is Children's Week, which includes a wide range of events and competitions.[13] Paignton has a variety of holiday accommodation, complemented by numerous pubs, nightclubs and restaurants.

Tourist attractions include Paignton Zoo and the Paignton and Dartmouth Steam Railway, which operates steam trains from Paignton to Kingswear, from where a ferry can be taken across the River Dart to Dartmouth. The line was closed by British Rail during the cutbacks of the Beeching era in the 1960s, and is operated today as a heritage railway line.

Suttons Seeds, a supplier of seeds, bulbs and horticultural products, is based in Paignton. 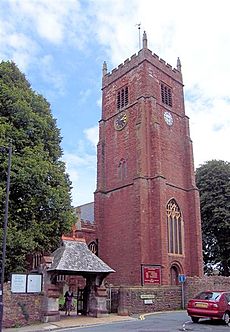 The Torbay Picture House (now closed) is believed to have been Europe's oldest purpose-built cinema and was built in 1907. Seat 2 Row 2 of the circle was the favourite seat of crime novelist Agatha Christie, who lived in neighbouring Torquay. The cinemas and theatres in her books are all said to be based on the Torbay Picture House. It was also used as a location for the 1984 Donald Sutherland film Ordeal by Innocence and the 1981 film The French Lieutenant's Woman (which was filmed mainly at Lyme Regis in Dorset).[15][16]

The Royal Bijou Theatre is now demolished, but a blue plaque marking its former location can be found next to the Thomas Cook travel agency in Hyde Road. The theatre was the venue for the premiere of The Pirates of Penzance by Gilbert and Sullivan on 30 December 1879. The performance was given at short notice to secure the British copyright on the work after problems had arisen with unauthorised performances of HMS Pinafore in the USA.[17]

The department store Rossiters was a centrepiece of the town until its closure in January 2009. The store is said to have been the inspiration for the sitcom Are You Being Served?.[18] In 2010, it reopened as a discount store.[19]

From 1889 to 1897 the mathematician Oliver Heaviside lived in Palace Avenue, in the building now occupied by Barclays Bank. A commemorative blue plaque can be seen on the wall. Heaviside is buried in Paignton Cemetery. 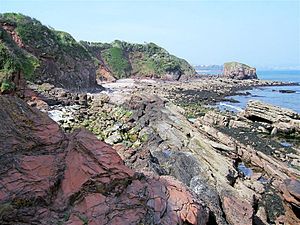 Saltern Cove is a Site of Special Scientific Interest

Paignton beach and the nearby Preston Sands are used for water sports including kite surfing and dinghy sailing. The reed beds found at Broadsands beach are a haunt of the rare cirl bunting.[20] Hollicombe beach, situated at Paignton's northern boundary with Torquay, features a geological stratotype at its northern end, known as the "Corbyn's Head Member"[21] Elberry Cove is used by jetski enthusiasts, while Saltern Cove is a Site of Special Scientific Interest due to its distinctive geology.

Paignton railway station is situated close to the shops and a short walk from the beach along Torbay Road. Queen's Park Station for the Paignton and Dartmouth Steam Railway is adjacent to the main railway station on the beach side of the level crossing. The bus and coach station face the main entrance to the railway station.

The other railway station in Paignton is Goodrington Sands (opened 1928), now part of the Dartmouth Steam Railway.

Paignton Harbour, with Torquay in the background