Pain of Salvation is a Swedish progressive rock/metal band led by Daniel Gildenlöw, who is the band's main songwriter, lyricist, guitarist, and vocalist. Pain of Salvation's sound is characterised by riff-oriented guitar work, a broad vocal range, oscillation between heavy and calm passages, syncopation, and polyrhythms. Thus far, every album released by the band has been a concept album. Lyrically, the band tends to address contemporary issues, such as sexuality, war, the environment, and the nature of God, humanity, and existence.

The name "Pain of Salvation" was devised by Daniel Gildenlöw, who interpreted the name as having "the meaning of balance. Taking the good with the bad. It is also a good expression in everyday use: when something does not go the way you planned, [the phrase 'pain of salvation'] indicates that this is just a slight setback on an otherwise painless journey towards your goal".[1][2]

In 1984, an eleven-year-old Daniel Gildenlöw founded the band "Reality" in Eskilstuna, Sweden. One of the early members was Daniel Magdic, who would remain with the band until after Entropia was recorded in 1997. In 1987, Reality participated in the Swedish Annual Music Contest, "Rock-SM", and were the youngest competitors ever to enter the competition. Daniel Gildenlöw won the category of "Best Vocalist". In 1990, drummer Johan Langell and bassist Gustaf Hielm joined the band.

Daniel Gildenlöw renamed the band to "Pain of Salvation" in 1991, having reportedly conceived the band's name during math class.[3] During the next 3 years, the band competed in contests and competitions while earning national recognition in the process.

In 1994, Kristoffer Gildenlöw, Daniel’s younger brother, replaced Hielm on bass. The line-up of the Gildenlöw brothers, Magdic and Langell entered a local studio and recorded the Hereafter demo, which the band actively shopped to record companies. Fredrik Hermansson learned of the band through the Hereafter demo and successfully auditioned to become the band's keyboardist.

In early 1997, Pain of Salvation entered the Roasting House Studio to record their debut album, Entropia, which was released in Asia on Avalon Records. Entropia was described as "a well-needed breath of fresh air for a genre that was full of self-parody and self-indulgence," as it was "delivered with emotion, intelligence, integrity, passion, and poignancy".[4] A Sea of Tranquility reviewer also defined the album as Pain of Salvation's most "eclectic"[5] release because of the varied song structures and arrangements. The album was also praised for sounding "crisp and fresh."[5] In 1999, the album was released in Europe by InsideOut Music and in South America by Hellion Records.

Preparations for the band’s second album were disrupted by the amicable departure of Magdic, who reportedly was unprepared to commit to the increasing demands associated with the band's initial success. Magdic was replaced by Johan Hallgren, who had previously played with Daniel Gildenlöw in Crypt of Kerberos. One Hour by the Concrete Lake was released in Asia on Avalon Records in July 1998. It was considered a darker and more complex effort than Entropia, with one reviewer noting that "in a world that demands instant gratification, those things for which one must labor to reach usually give greater satisfaction in the end. That is certainly true with this CD".[6] Another reviewer remarked that it was a more focused effort compared to its predecessor while also noting that it was a concept album which "contains several independent subtopics and, instead of directly telling a story, combines [interesting] lyrical themes in a very unusual and successful way."[5] Pain of Salvation signed with InsideOut Music and later American sibling, InsideOut Music America. The band embarked on a European tour supporting fellow progressive metal bands Threshold and Eldritch. They also played at their first ProgPower festival in Tilburg on 14 November 1999.

After a short break to regroup, Pain of Salvation recorded their third album, The Perfect Element, Part I from March to July 2000. Conceptually, The Perfect Element, Part I examined an individual's formative events during the transition from adolescence to adulthood. Released in October 2000, the album was noted for being more straightforward and melodic than the two previous albums, yet retaining the complexity of arrangement and concept.[7] Also, it was defined as "a landmark in the history of prog metal music. It is original, ground-breaking, fresh, and the definitive prog release of the new millennium."[8] The reviewer stated that Perfect Element I marked the beginning of a completely new era for the band and praised the bold experimentation in the songwriting and conceptual development.[9] In support of the album, the band toured Europe from September to October 2000 with Arena. In February 2001 the band headlined ProgPower USA alongside Symphony X and Evergrey.

In late 2001, Pain of Salvation recorded their fourth album, Remedy Lane, which was almost entirely written during a two-month period from August to September 2001 by Daniel Gildenlöw. The album, which was described as the band's "breakthrough",[10] was recorded at Roasting House Studio in Sweden. Remedy Lane is Daniel Gildenlöw's semi-autobiographical meditation on love, lust, and life. The album was released in January 2002. During the Remedy Tour, Pain of Salvation opened for Dream Theater.

On 12 May 2003, Pain of Salvation recorded an acoustic concert in their hometown of Eskilstuna before a crowd of 80. The concert was released as 12:5 in early 2004. It featured dramatically rearranged versions of the band's past material. As a result, the band considers the album as a stand-alone work and not merely a live album.[citation needed]

For much of 2003 and 2004, the band worked on their most ambitious conceptual undertaking to date: a concept album about the nature of God and humanity, which Daniel Gildenlöw had been working on intermittently since 1996. The recording of the album was preceded by a number of live shows in Eskilstuna, where the band performed the album in its entirety. The shows were full productions replete with costumes, stage props, screen projections and the nine-part Orchestra of Eternity. After the conclusion of the string of performances, the material was further refined by Daniel Gildenlöw prior to commencing the recording in February 2004.

In September 2004, BE was released. The album proved divisive for critics and fans, with Allmusic remarking that "It may be safe to say that never in the history of rock & roll has an album creaked so alarmingly under the weight of such a ponderous concept".[11] Sea of Tranquility commented that "[the album] BE too holds so many undiscovered treasures, and only after a good many spins will it disclose itself to its listeners."[12] BE included a song featuring samples culled from a special phone line that the band set up for fans to record their messages on "God’s answering machine". The messages were compiled and presented with a relaxed instrumental accompaniment, resulting in what the band considers to be one of their most touching tracks.[13] 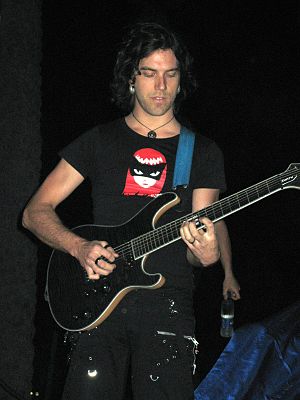 Pain of Salvation has not played in the United States since 2004, when Daniel Gildenlöw expressed his refusal to take part in the U.S. policy of fingerprinting all out-of-country visitors, as well as his contempt for the Bush administration.[14] On 22 January 2009, he announced his support for the newly elected Barack Obama and lifted his embargo on the country. On 21 February 2006, Kristoffer Gildenlöw, unable to attend rehearsals due to his relocation to the Netherlands, was asked to leave the band.

Scarsick was released on January 22, 2007. The album again met with mixed reviews.[15] Daniel Gildenlöw said that Scarsick is a thematic continuation of The Perfect Element, Part I, drawing listeners' attention to the CD inlay where it reads: The Perfect Element, Part II - "He".[16][17] Because of his brother's departure, Daniel Gildenlöw recorded the bass guitar parts for the album. The band toured Europe and played select international shows, including one in Egypt. Simon Andersson was recruited as touring bassist and, on 10 March 2007, he was made a full member of the band.

On April 29, 2007, the band announced that Johan Langell would depart at the end of the tour due to family commitments. On 6 October 2007, at the "Motstøy" festival in Notodden, the band announced that Langell's replacement would be Leo Margarit. Both drummers performed during the show, with Margarit doing a three-minute solo at the end of "Nightmist". Late in 2008, Simon Andersson left the band to pursue his side projects and recover from the Scarsick tour. The band relied on touring musicians Per Schelander (2008-2010) and Daniel Karlsson (2011) for the next three years.

On 13 February 2009, the band announced that they would take part in Dream Theater's "Progressive Nation 2009" tour.[18] However, the recent bankruptcy of SPV forced both Pain of Salvation and Beardfish to back out of the tour because of a lack of financial backing.[19]

The Ending Themes (On the Two Deaths of Pain of Salvation) DVD was released on 24 March 2009 and featured the band performing in Amsterdam performance. The DVD included a cover of the Leonard Cohen song, "Hallelujah".

On 1 November 2008, the band debuted a new song, "Mortar Grind", from their upcoming studio album and EP. Pain of Salvation described its next project as a two album concept.[20] However, the project was delayed due to the bankruptcy of SPV, subsidiary InsideOut Music was acquired by Century Media, which allowed the band to finish the albums.[20] By the time that Daniel Gildenlöw returned to the album, he had re-evaluated the double album concept and ultimately decided to split the project into two separate releases.[21]

In December 2009, it was confirmed that the song "Road Salt" would be an entry in the 2010 edition of Melodifestivalen, Sweden's national final for the 2010 Eurovision Song Contest.[22] The band performed during the first semi-final and qualified for the runners-up broadcast; however, they lost to Pernilla Wahlgren by a slim margin and did not progress to the finals.[22]

Road Salt One was released on 17 May 2010 in most of Europe and on 8 June 2010 in the North America while Road Salt Two was released in September 2011. A music video for "Where It Hurts" was also released.[23] The Road Salt albums featured a concept that was in sharp contrast to previous undertakings, as Daniel Gildenlöw discusses:

it’s not like a chronological story like the other albums. It’s like several parallel stories and once you look at them together they start vibrating at the same speed or frequency and that’s where you get the story...The whole idea is to compare situations or chains of events, compare them to roads and choose what roads you want to take and the roads will lead you to different places...whatever road you are traveling down at different points in the movie they will be keyframes. At that position, you could see things from a different perspective than you normally would. Many of these songs are these key frames and sort of singularities and special points on the different roads from all these different people doing the different things. That’s where everything connects.[21]

In late 2011 and early 2012, the band's lineup underwent significant turmoil, with Johan Hallgren and Fredrik Hermansson leaving at the end of the year,[24] touring bassist Daniel Karlsson joining the band on keyboards,[25] Gustaf Hielm returning on bass guitar, and Ragnar Zolberg joining on guitars.[26]