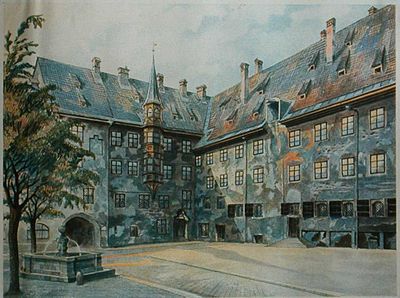 The Courtyard of the Old Residency in Munich, Adolf Hitler, 1914

Adolf Hitler, leader of the Nazi Party in Germany in the years leading up to and during World War II, was also a painter.[1] He produced hundreds of works and sold his paintings and postcards to try to earn a living during his Vienna years (1908–13). However, he was not successful. A number of his paintings were recovered after World War II and have been sold at auctions for tens of thousands of dollars. Others were seized by the U.S. Army and are still held by the U.S. government.

Hitler’s style was very calculated when representing architecture in his paintings. Instead of progressing in his artistic influence, his works copied the artists of the nineteenth century and many of the masters preceding him.[2] He claimed to be the synthesis of many artistic movements but it is clear that he drew primarily from Greco-Roman classicism, the Italian Renaissance, and Neo-Classicism. He liked the technical ability of these artists, as well as the understandable symbolism.[3] Rudolf von Alt was his greatest “teacher”, as he called him. There is similar use in color and subject matter between the two, but Alt displays fantastical landscapes giving equal—if not more—attention to nature and the surrounding environment than the architecture.

In his autobiography Mein Kampf, Adolf Hitler described how, in his youth, he wanted to become a professional artist, but his aspirations were ruined because he failed the entrance exam of the Academy of Fine Arts Vienna.[4] Hitler was rejected twice by the institute, once in 1907 and again in 1908.[5] In his first examination, he had passed the preliminary portion; which was to draw two of the assigned iconic or biblical scenes, in two sessions of three hours each. The second portion was to provide a previously prepared portfolio for the examiners. It was noted that Hitler’s works contained “too few heads”.[6] The institute considered that he had more talent in architecture than in painting. One of the instructors, sympathetic to his situation and believing he had some talent, suggested that he apply to the academy's School of Architecture. However, that would have required returning to secondary school from which he had dropped out and which he was unwilling to do.

Later, when he used to tint and peddle postcards featuring scenes of Vienna, Hitler frequented the artists' cafes in Munich in the unfulfilled hope that established artists might help him with his ambition to paint professionally.

According to a conversation in August 1939 before the outbreak of World War II, published in the British War Blue Book, Hitler told British ambassador Nevile Henderson, "I am an artist and not a politician. Once the Polish question is settled, I want to end my life as an artist."[4]

From 1908 to 1913, Hitler tinted postcards and painted houses for a living. He painted his first self-portrait in 1910 at the age of 21. This painting, along with twelve other paintings by Hitler, were discovered by Company Sergeant Major Willie J. McKenna in 1945 in Essen, Germany.[5] 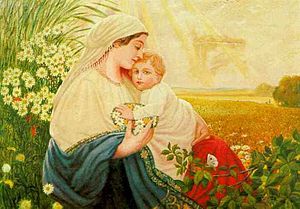 When Hitler served in World War I at the age of 25 in 1914, he carried his paints with him to the front and spent his idle hours doing art. The works he painted during this period were among his last before he became a politician. The themes of his wartime painting included farmers' houses, the dressing-station, etc.

A number of Hitler's paintings were seized by the U.S. Army at the end of World War II. They were taken to the United States with other captured materials and are still held by the U.S. government, which has declined to allow them to be exhibited.[9] Other paintings were kept by private individuals. In the 2000s, a number of these works began to be sold at auction.[10] In 2009 auction house Mullock's of Shropshire sold 15 of Hitler's paintings for a total of ₤97,672 (US$143,358).[11] while Ludlow’s of Shropshire sold 13 works for over €100,000.[12] In a 2012 auction in Slovakia, a mixed-media painting fetched €32,000.[13] And on November 18, 2014, a watercolor by Hitler of the old registry office in Munich sold for €130,000 at an auction in Nuremberg. The watercolor included a bill of sale and a signed letter by Albert Bormann, which may have contributed to its comparatively high selling price.[14] 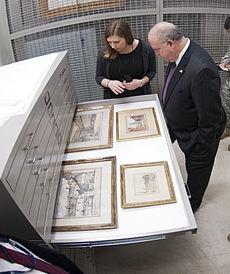 Watercolors owned by one of Hitler's photographers Heinrich Hoffmann stored at the Army Center of Military History. The paintings were cited in Price v. United States.

A group of scholars estimate that there are only 300 completed works by Hitler over the span of his life; however, Hitler mentioned in his book, Mein Kampf, that while in Vienna, he produced around two or three paintings a day. Even if he were to paint one portrait a day for the years he spent in Vienna, that number would be well over 600. Peter Jahn, perhaps one of the foremost experts on Hitler's art, said he had two interviews with Hitler. Hitler said in the six years he spent in Vienna and Munich, "from 1908 to 1914, he produced over a thousand paintings, a few of them in oils." Jahn was one of the original people assigned by Schulte Stratthaus, before Hitler annexed Austria in 1937. Stratthaus had been appointed by Hitler in 1936 to locate and buy paintings Hitler had painted from 1907 to 1912, and 1921 to 1922. Jahn spent nearly four years tracking down Hitler's early works, until he was called into military service.[15] Jahn became the Art Consultant to the German Embassy in Vienna in 1937, where he would then search for, purchase and collect individual pieces of Hitler's art, in order to allegedly destroy a majority of the paintings. Jahn is currently selling one of the largest collections of Hitler’s art, about 18 pieces, with an average selling price of $50,000.[15] However, The Courtyard of the Old Residency in Munich and a few other paintings by Hitler are archived in the basement of the Army Center of Military History in Washington, D.C., never shown to the public eye because of their controversial nature.

One modern art critic was asked to review some of his paintings without being told who painted them and judged them "quite good". The different style in which he drew human figures, however, the critic said, represented a profound uninterest in people.[16]

According to a report entitled The Water Colours of Hitler: Recovered Art Works: Homage to Rodolfo Siviero, prepared by Fratelli Alinari, Hitler's water colours prove he was "grim" as a painter.[1]

Use of art as a political tool

Although Hitler abandoned his passion for art to join the military in late August 1914 and went on to become one of the most infamous political figures in history, he still used art to his advantage. From July to November in 1937, the Degenerate Art Exhibition was organized by the Nazi Party in Munich to counterpoint the Great German Art Exhibition. It was recorded that over one million attended the exhibition in its first six weeks of showings. The collection had 650 works of art that were extracted from German museums and displayed them as “degenerate art”. If a piece was found to insult Germany, didn't apply natural form or classical style, weakness of character, mental disease or racial impurity it fell under the category of degenerate art.[17] Paintings were hung close together in uncomfortably small rooms, and were accompanied by hand written labels that often provided inaccurate information and condemning remarks.[18] The political goal of the exhibit was to counteract the movement of modernism and claim that it was a scheme for people who were against Germany. Hitler often blamed the Jewish-Bolshevist community for such and that they needed to be eliminated, even though there were only six Jewish artists out of the 112 included in the exhibit.[19] Nazi Art was defined as racially pure, easily understood, and depictions of people who exemplified the German race. The Great German Art Exhibit served to abolish any use of Modernism, Expressionism, Dada, New Objectivity, Futurism, and Cubism that had existed since 1910.[20]