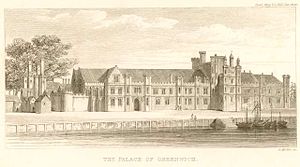 A sketch of Greenwich Palace in England, published in the Gentlemen's Magazine in 1840. earlier published by W Bristow in 1797.

The Palace of Placentia was an English Royal Palace built by Humphrey, Duke of Gloucester, in 1443,[1][2] in Greenwich, on the banks of the River Thames, downstream from London. It was demolished by Charles II in 1660, to make way for a new palace; nearly forty years later, the Greenwich Hospital (now The Old Royal Naval College) was built on the spot instead.

Humphrey was regent during the rule of Henry VI, and built the palace, in 1433,[2] under the name Bella Court.[3] In 1447, Humphrey fell out of favour with the new queen, Margaret of Anjou, and was arrested for high treason. He died in prison – Shakespeare says he was murdered – and Margaret took over Bella Court, renaming it the Palace of Placentia, sometimes written as the Palace of Pleasaunce.[3] 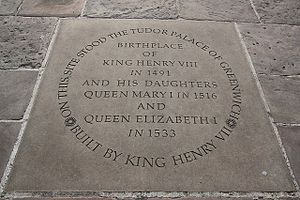 Historic marker on the site of the former palace.

Henry VII rebuilt the palace, with a design based around three large courtyards, between 1498 and 1504.[3]

The Palace remained the principal royal palace for the next two centuries. It was the birthplace of King Henry VIII in 1491, and figured heavily in his life.[4] Following his marriage to Catherine of Aragon, Placentia was the birthplace of Mary I in February 1516.[5] After his marriage to Anne Boleyn, his daughter, later Queen Elizabeth I, was born at Placentia in 1533,[6] and he married Anne of Cleves there in 1540. A tree in Greenwich Park is known as Queen Elizabeth's Oak, in which she is reputed to have played as a child.[7]

Both Mary and Elizabeth lived at Placentia for some years during the sixteenth century, but during the reigns of James I and Charles I, the Queen's House was erected to the south of the Palace.[8] Placentia fell into disrepair during the English Civil War, serving time as a biscuit factory and a prisoner-of-war camp.[8][9] In 1660, Charles II decided to rebuild the Palace, engaging John Webb as the architect for a new King's House.[10] The only section of the Palace to be completed was the east range of the present King Charles Court, but this was never occupied as a royal residence.[10] Most of the rest of the palace was demolished, and the site remained empty until construction of the Greenwich Hospital began in 1694.[10]

The Greenwich Hospital complex became the Greenwich Royal Naval College in 1873, when the naval college was moved from Portsmouth.[11] The buildings are today occupied by the University of Greenwich and the Music Faculty of Trinity Laban Conservatoire of Music and Dance.[9][12]

Construction work for drains in late 2005 identified previously unknown Tudor remains. A full archaeological excavation completed in January 2006 found the Tudor Chapel and Vestry with its tiled floor in situ.[13] The Vestry of the old Palace was not demolished and later became the home of the Treasurer of Greenwich Hospital.[14]