The Palace of Venaria (Italian: Reggia di Venaria Reale) is a former royal residence located in Venaria Reale, near Turin, in Piedmont, northern Italy. It is one of the Residences of the Royal House of Savoy, included in the UNESCO Heritage List in 1997.

The Palace was designed and built from 1675 by Amedeo di Castellamonte, commissioned by duke Charles Emmanuel II, who needed a base for his hunting expeditions in the heathy hill country north of Turin. The name itself derives from Latin, Venatio Regia meaning "Royal Hunt".

Charles Emmanuel was inspired by the example of the Castle of Mirafiori, built by Duke Charles Emmanuel I for his wife Catherine Michelle of Spain. Keen to leave a memorial of himself and his wife, Marie Jeanne of Savoy-Nemours, he bought the two small villages of Altessano Superiore and Altessano Inferiore from the Milanese-origin Birago family, who had created here a large complex of plants. The place was rechristened Venaria for his future function as hunting base.

The design was commissioned from architects Amedeo di Castellamonte and Michelangelo Garove. The plan of the annexed borough was to symbolize the collar symbol of the Order of the Most Holy Annunciation, a dynastic order created by the House of Savoy. In 1675 the borough and the palace were nearly completed, including the so-called Reggia di Diana (Royal Residence of Diana, the heart of the complex. Works however continued until the next century, as in 1693 French invasion troops are known to have destroyed some buildings and Duke (future King) Victor Amadeus II had the residence modified according to French canons.

Further damage was inflicted during the Siege of Turin (1706), when the French troops under Louis d'Aubusson de La Feuillade were billeted there. After the Savoyard victory, Victor Amadeus named Filippo Juvarra as director of the works. It was here that during the reign of Charles Emmanuel III that his third wife died giving birth to son. The structure was rarely used after.

During the Napoleonic domination, the structures were turned into barracks and the gardens destroyed to create a training ground. The complex maintained this role also after the fall of Napoleon, and was used by the Italian Army until 1978, when it was sold to the Ministry of Culture. Restoration works were begun, but most of the complex was open for tourism from 13 October 2007. 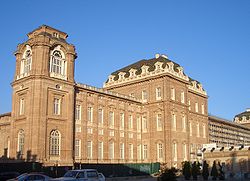 The Belvedere and the Garove Pavilion. 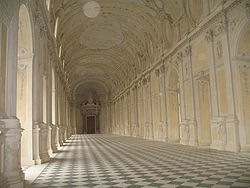 The entrance of the palace leads into the Corte d'onore ("Honour Court"), which once housed a fountain with a deer. The main facade, covered in the 17th century section with plaster and featuring cornucopias, shells and fruits, is connected on the right by a part with brickworks added in the 18th century. From the Michelangelo Garove period (1669–1713) are the two towers covered with multicolor pentagonal tiles in ceramics, which are united by a large gallery, known from the 20th century as Galleria di Diana or Galleria Grande.

The interiors originally housed a large collection of stuccos, statues, paintings (according to Amedeo di Castellamonte, up to 8,000) from some of the court artists of the times, such as Vittorio Amedeo Cignaroli, Pietro Domenico Olivero and Bernardino Quadri.

The original gardens of the residence are now totally disappeared, since French troops turned them into training grounds. Earlier drawings show an Italian garden with three terraces connected by elaborate stairways and architectural features such as a clock tower in the first court, the fountain of Hercules, a theater and parterres.

Recent works have recreated a park in modern style, exhibiting modern works by Giuseppe Pennone, including a fake 12 m-high cedar housing the thermic discharges of the palace. 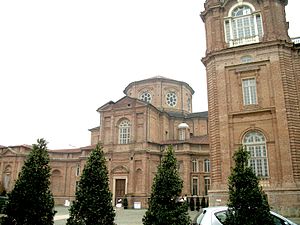 Church of Sant'Uberto, with the royal palace on the left

Church of Sant'Uberto and other 18th century additions

After the death of Garove (1713), Juvarra built the Grand Gallery and in parallel built a church dedicated to St. Hubertus, patron of the hunters (1716–1729). The church is strictly included within the palace's structure, so that it was impossible to build a dome: this was then frescoes trompe-l'oeil from inside.

Other works of the Juvarra period included the stables, the citroneria (fruit grows, 1722–1728) and the renovation in French-style of the facades.

The last buildings date from the mid-18th and early 19th centuries (stables, riding school, stair of the Reggia di Diana, gallery of Sant'Uberto); subsequently the Palace was abandoned in favour of the Palazzina di Caccia di Stupinigi (1729), which was by then more in tune with the tastes of the European courts.