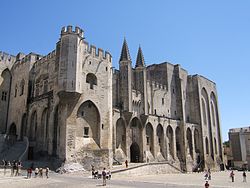 The façade of the palais neuf 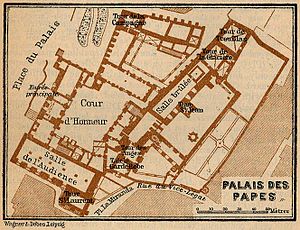 The Palais des Papes (English: Papal palace, lo Palais dei Papas in Occitan) is a historical palace in Avignon, southern France, one of the largest and most important medieval Gothic buildings in Europe. One time fortress and palace, the papal residence was the seat of Western Christianity during the 14th century. Six papal conclaves were held in the Palais, leading to the elections of Benedict XII in 1334, Clement VI in 1342, Innocent VI in 1352, Urban V in 1362, Gregory XI in 1370 and Antipope Benedict XIII in 1394.

The Palais is actually made up of two buildings: the old Palais of Benedict XII which sits on the impregnable rock of Doms, and the new Palais of Clement VI, the most extravagant of the Avignon popes. Not only is the final combination the largest Gothic building of the Middle Ages, it is also one of the best examples of the International Gothic architectural style. The construction design was the work of two of France’s best architects, Pierre Peysson and Jean du Louvres and the lavish ornamentation was the work of two of the best students of the School of Siena (Italy), Simone Martini and Matteo Giovanetti.

In addition, the papal library housed in the Palais (the largest in Europe at the time with over 2,000 volumes), attracted a group of clerics passionate in the study of "belle-lettres", amongst the future founders of Humanism, Petrarch. At the same time, composers, singers and musicians were drawn to the Great Chapel of the Palais. It was there that Clement VI appreciated the Mass of Notre-Dame de Guillaume de Machault, there that Philippe de Vitry at the pope’s invitation presented his Ars Nova and there that Johannes Ciconia came to study.

Due to its immense size, the Palais was also the place where the general organisation of the Church began to change. It facilitated the centralisation of services and the adaption of operations in order to suit the needs of the papacy, creating a truly central administration for the Church.[1] The strength of the Curia (Church administration), 200 at the end of the 13th century, surpassed 300 at the beginning of the 14th century and reached 500 people in 1316. To this was added over 1,000 lay officials working within the Palais.[2]

Despite this, the Palais became obsolete when the papacy found it necessary to return to Rome. The hope of reuniting Latin and Orthodox Christians, along with the achievement of peace in the Papal States in Italy, made the case of returning stronger. Added to that was the strong conviction of both Urban V and Gregory XI that the seat of the papacy could only be the tomb of St Peter. Despite strong opposition from the Court of France and the College of Cardinals, both popes found the means to return to Rome, the first, on 30 April 1362, the second on 13 September 1370. This time, the return was absolute.[3]

In the following centuries, the Palais lost all of its former glory, despite it serving as the seat of two anti-popes and many cardinals. It retained, however, a “work of destruction” aspect that French poets and writers have referred to over the centuries, with its powerful sense of beauty, simplicity, grandeur and immortality.[4]

Since 1995, the Palais des Papes has been classified, along with the historic center of Avignon, as a UNESCO World Heritage Site, under cultural criteria i, ii and iv.[5]

The Palais construction began in AD 1252. Avignon became the residence of the Popes in 1309, when the Gascon Bertrand de Goth, as Pope Clement V, unwilling to face the violent chaos of Rome after his election (1305), moved the Papal Curia to Avignon, a period known as the Avignon Papacy. Clement lived as a guest in the Dominican monastery at Avignon, and his successor Pope John XXII set up a magnificent establishment there, but the reconstruction of the old bishops' palace was begun in earnest by Pope Benedict XII (1334–42) and continued by his successors to 1364. The site, on a natural rocky outcrop at the northern edge of Avignon, overlooking the river Rhône, was that of the old episcopal palace of the bishops of Avignon. The Palais was built in two principal phases with two distinct segments, known as the Palais Vieux (Old Palace) and Palais Neuf (New Palace). By the time of its completion, it occupied an area of 11,000 m2 (118,403 sq ft). The building was enormously expensive, consuming much of the papacy's income during its construction.

The Palais Vieux was constructed by the architect Pierre Poisson of Mirepoix at the instruction of Pope Benedict XII. The austere Benedict had the original episcopal palace razed and replaced with a much larger building centred on a cloister, heavily fortified against attackers. Its four wings are flanked with high towers. 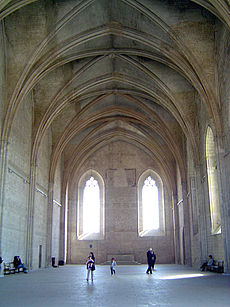 The Grand Chapel, where the Avignon popes worshiped.

Under Popes Clement VI, Innocent VI and Urban V, the building was expanded to form what is now known as the Palais Neuf. An architect, Jean de Louvres, was commissioned by Clement VI to build a new tower and adjoining buildings, including a 52 m long Grand Chapel to serve as the location for papal acts of worship. Two more towers were built under Innocent VI. Urban V completed the main courtyard (known as the Court d'Honneur) with further buildings enclosing it. The interior of the building was sumptuously decorated with frescos, tapestries, paintings, sculptures and wooden ceilings.

The popes departed Avignon in 1377, returning to Rome, but this prompted the Papal Schism during which time the antipopes Clement VII and Benedict XIII made Avignon their home until 1403. The latter was imprisoned in the Palais for five years after being besieged in 1398 when the army of Geoffrey Boucicaut occupied Avignon. The building remained in the hands of antipapal forces for some years – it was besieged from 1410 to 1411 – but was returned to the authority of papal legates in 1433.

Although the Palais remained under papal control (along with the surrounding city and Comtat Venaissin) for over 350 years afterwards, it gradually deteriorated despite a restoration in 1516. When the French Revolution broke out in 1789 it was already in a bad state when it was seized and sacked by revolutionary forces. In 1791 it became the scene of a massacre of counter-revolutionaries, whose bodies were thrown into the Tour des Latrines in the Palais Vieux.

The Palais was subsequently taken over by the Napoleonic French state for use as a military barracks and prison. Although it was further damaged by the military occupation, especially under the anti-clerical Third Republic, when the remaining interior woodwork was cleared away for use of the structure as a stables – the frescos were covered over and largely destroyed – ironically this ensured the shell of the building's physical survival. It was only vacated in 1906, when it became a national museum. It has been under virtually constant restoration ever since.

The Palais is today a palace of culture and primarily a tourist attraction, attracting around 650,000 visitors per annum, putting it regularly in the top ten most visited attractions in France.[6] It also houses a large convention centre and the archives of the département of Vaucluse, which include a research centre on the papacy of Avignon, organised jointly by the École française de Rome and the institut de recherche et d'histoire des textes.

With its size, architecture and historical significance, the Palais regularly serves as an exhibition centre. The first major exhibition was initiated by René Char and in the Grand Chapel between June 27 and 30, 1947. Enitled "Exposition de peintures et sculptures contemporaines" (Exposition of contemporary painters and sculptors), it was the starting point for what would later become the Festival d'Avignon.[7]

The courtyard of the Palais des Papes is a central performance location during the Festival d'Avignon IN, which held every year in July. It is also the site of many cultural and economic events (exhibitions, shows, conventions ...)

The Palais is also home to the International Congress Centre[8] which was established in 1976 and today hosts a large number of events annually. These include congresses, parliaments, symposia, reunions and other gatherings, with the largest room, the 'Grande Audience', able to hold up to 700 guests. 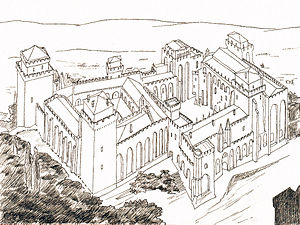 Drawing of the palace

With 15,000 m2 of floor space, the Palais is the largest Gothic palace in all of Europe[9] and, due to its many architectural merits, one of the most important in the world. These merits were highlighted by Viollet-le-Duc, author of “Dictionnaire raisonné de l’architecture française du XIe au XVIe siècle” (Dictionary of French Architecture in from the 11th to 16th Centuries), who referred extensively to the Palais, including the thickness and height of its towers, the strength of its crenelated walls, the use of arcs for support on its façades and its ability to withstand heavy and drawn-out sieges. 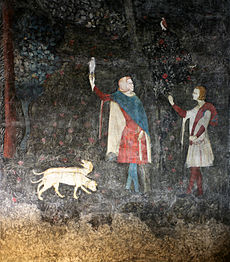 Detail of the paintings

This room is one of the most famous rooms of the palace because of its paintings on the walls and roof.

This room served as Pope Clement VI writing cabinet. It is commonly called "house of deer" because of its murals depicting hunting scenes. These paintings are very interesting because they show all the influence of Italian painting on French painters of the time. Work on perspectives, mainly mastered by Italian painters is very present in these representations. It is an artistic work of high quality for the time, which leads to think that beyond the artistic influence of the great Italian masters, they may even have had a hand in their execution.

This room was used primarily as a reception room. Covered with tapestries on starry blue background, there is actually nothing left of these sets. Indeed, a fire that destroyed the palace in the XIVth century; many parts have been restored or rebuilt.

During conclaves, it is in this room that the cardinals met to elect a new pope. For the occasion, the room was walled and only a small opening was left open to provide all the necessary food. After each conclave, the walls were destroyed, revealing a vaulted room opening to the rest of the palace.

Located on the second level of the Saint-Jean tower, the Saint-Martial chapel relates through painting the main parts of Saint Martial's life. Matteo Giovanetti worked there in 1344 and 1345. The reading direction of the painting should be made from top to bottom.[10]

From 1347 to 1348, Matteo Giovannetti was in charge of the Saint-Jean chapel, located under the Saint-Martial chapel.[11]

This chapel is actually closed to the public because it is being renovated.

The Palais des Papes regularly hosts art exhibitions. The tradition began in 1947, when the art critic Christian Zervos and the poet René Char organised an exhibition of the likes of Matisse, Picasso, Braque and Mondrian.[12] The exhibitions shown since then include two exhibitions of Picasso (in 1970 and 1973), the comprehensive 2000 exhibition “La beauté in fabula”[13] and, more recently, the exhibition “Les Papesses” (2013) and single exhibitions of Miquel Barceló (2010) and Stefan Szczesny (2014).