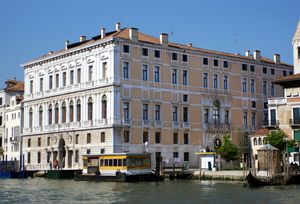 Palazzo Grassi (also known as the Palazzo Grassi-Stucky) is an edifice in the Venetian Classical style located on the Grand Canal, between the Palazzo Moro Lin and the campo San Samuele, in Venice, Italy. It was designed by Giorgio Massari, and the building was completed between 1748 and 1772.

The latecomer among the palaces on the Grand Canal of Venice, Palazzo Grassi has an academic classical style that is in contrast to the surrounding Byzantine Romanesque and Baroque Venetian palazzi. It has a formal palace façade, constructed in white marble, and lacking the lower mercantile openings typical of many Venetian patrician palaces.

The Grassi family sold the palazzo in 1840, with ownership that followed passing through many different individuals. The Palazzo was purchased by the Fiat Group in 1983, under the late chairman Gianni Agnelli, and it underwent a complete restoration overseen by Count Antonio Foscari Widmann Rezzonico, the current owner of Villa Foscari. The group's aim was to transform Palazzo Grassi into an exhibition hall for the visual arts. It continues to be used as an art gallery today.[1]

Between 1984 and 1990, Pontus Hultén was in charge of the art museum which also contains a 600-seat outdoor theatre. Since 2006, the palace has been owned by the French entrepreneur François Pinault who exhibits his personal art collection there. It was also where Pinault's son Francois-Henri met actress Salma Hayek and it served as the location for their wedding vow renewal.[2]