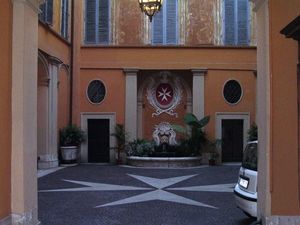 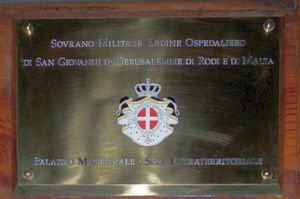 Plaque at the entrance

Palazzo Malta, officially named as the Magistral Palace (Italian: Palazzo Magistrale), and also known as Palazzo di Malta or Palazzo dell'Ordine di Malta, is the more important of the two headquarters of the Sovereign Military Order of Malta (the other being Villa Malta), a sovereign chivalric order. It is located in Via dei Condotti 68 in Rome, Italy, a few minutes' walk from the Spanish Steps, and has been granted extraterritoriality by the Italian Government and is now the property of the Order.

On 12 June 1798, the French forces under Napoleon Bonaparte captured the island of Malta, which had been the base of the Order of St. John of Jerusalem, also called the Order of Malta. The Order had been given the island by Charles V, Holy Roman Emperor in 1530.[1] Napoleon left the island with a sizeable garrison and a handpicked administration. Following a Maltese uprising, the British took over Malta on 5 September 1800. Malta was made a British colony on 30 March 1814 by the Treaty of Paris.[2]

Thus, the Order of Malta was left without any territory, and it was effectively disbanded. It was restored, however, in 1834, under the new name "Sovereign Military Hospitaller Order of St. John of Jerusalem of Rhodes and of Malta", or simply the "Sovereign Military Order of Malta" (SMOM). New headquarters were set up at Palazzo Malta. In 1869, the Palazzo Malta, and the other headquarters of the Order, Villa Malta, were granted extraterritoriality by Italy.[3] Today they are recognised by 106 countries as the independent headquarters of a sovereign entity, with mutual diplomatic relations established.[4]

The building now called Palazzo Malta was purchased in the 16th century by the Maltese-born Italian archeologist Antonio Bosio, whose uncle was the representative of the Order of St. John to the Holy See. When Bosio died in 1629, he left the building to the Order, and it subsequently became the home of the Order's ambassador to the Holy See. When Carlo Aldobrandini became ambassador, he enlarged the building to its present size.[5]

In the 1720s, Grand Master António Manoel de Vilhena entrusted Carlo Gimach with the restoration and additional decoration of the palace. This information is retrieved with the letters exchanged by the Grandmaster and the ambassador for the Order in Rome, Giambattista Spinola.[6] Renovations included the addition of a grand fountain in the courtyard. The building remained an embassy until the entire Order moved its headquarters there in 1834.[5]

The building was extensively renovated between 1889 and 1894, but most of the original characteristics were retained.[5]

Since 11 March 2008, His Most Eminent Highness Fra' Matthew Festing, the 79th Prince and Grand Master of the Sovereign Military Order of Malta, has lived in the Palazzo Malta. The majority of governmental and administrative duties are carried out there also.

The building is made of ashlar blocks, and it is crowned with a corbelled cornice.[5]