For the military use of the Airport, see Palm Beach Air Force Base

Palm Beach International Airport (KPBI) began operations in 1936 as Morrison Field. Morrison Field was named in honor of Miss Grace K. Morrison, a key participant in the planning and organization of the airfield. The first flight departing the field was a New York bound Eastern Air Lines DC-2 in 1936. The airport was dedicated on December 19, 1936.

In 1937 the airport expanded beyond an airstrip and an administration building when the Palm Beach Aero Corporation obtained a lease, built hangars and the first terminal on the south side of the airport. The new terminal was known as the Eastern Air Lines Terminal. The field was used by the U.S. Army Air Forces during World War II. Following the attack on Pearl Harbor Morrison Field was used for training and later as a staging base for the Allied invasion of France, with numerous aircraft departing Morrison en route to the United Kingdom to take part in the D-Day invasion of Normandy.

In 1947 the newly established U.S. Air Force moved to Brookley Field, later Brookley AFB, in Mobile, Alabama and service by Eastern Airlines and National Airlines resumed from Morrison Field. The name changed to Palm Beach International Airport on August 11, 1948. In September 1950 runway 5 was 6030 ft long, 9 was 7010 ft and 13 was 6930 ft.

The airport was again used by the U.S. Air Force in 1951 and renamed Palm Beach Air Force Base,[2] under the control of the Military Air Transport Service (MATS). USAF operations occupied the north half of the airfield while civil operations and the airline terminal used the south half. MATS used the base for training with the host unit being the 1707th Air Transport Wing (Heavy), and its 1740th Heavy Transport Training Unit. The 1707 ATW was known as the "University of MATS", becoming the primary USAF training unit for all Air Force personnel supporting and flying heavy transport aircraft. These included C-124 Globemaster II, C-118 Liftmaster, C-97 Stratofreighter, and C-54 Skymaster maintenance training along with aircrew and transition pilot training. Nearly 23,000 airmen trained at Palm Beach AFB during the 1950s and 1960s.

The Air Weather Service used Palm Beach AFB as headquarters for hurricane research, flying the first WB-50D Superfortress "Hurricane Hunter" aircraft from the base in 1956.

After several years of Palm Beach County fighting the Air Force presence in West Palm Beach, the Air Force started to close down operations there. The 1707 ATW was inactivated on June 30, 1959 and reassigned to Tinker AFB, Oklahoma. With the wing's departure, Palm Beach County took over airfield operations. The Air Force retained a small presence at the base with the 9th Weather Group becoming the main operational unit at Palm Beach AFB, performing hurricane and weather research for the Air Weather Service. The Air Photographic and Charting Service (APCS) moved its 1370th Photo-Mapping Wing to the base, performing geodetic survey flights. During the early 1960s Palm Beach AFB was used by Air Force One, with President John F. Kennedy landing at the base when staying at the Kennedy home in Palm Beach. The Air Force finally closed Palm Beach AFB in 1962 and all property was conveyed to Palm Beach International Airport the same year.[2]

In October 1966 an eight-gate Main Terminal opened on the northeast side of the airport; in 1974 Delta Air Lines moved into its own six-gate terminal with the airport's first jetways. The FAA built a new Air Traffic Control Tower on the south side of the airport in this period.

On October 23, 1988 the 25-gate David McCampbell Terminal, named for World War II naval flying ace, Medal of Honor recipient and Palm Beach County resident CAPT David McCampbell, USN (Ret) was dedicated. The 550,000-square-foot (51,000 m2), Greiner-designed terminal was designed with expansion in mind and can be doubled in size when required.[3]

In 2003 the terminal was voted among the finest in the nation by readers of Conde Nast Traveler Magazine. In that year a new landscaped I-95 interchange was built to decrease traffic on Southern Boulevard (US 98) extending Turnage Boulevard (the road around the perimeter of the concourse).

Competition from rapidly expanding Fort Lauderdale/Hollywood International Airport cut growth at the airport in the 1990s. The 2001 recession and the September 11 terrorist attacks further inhibited growth, but development in South Florida since 2002 has finally led to a surge of passenger traffic at the airport. In addition, discount carriers such as JetBlue and Southwest Airlines began service to PBI. In 2006 the county embarked on an interim expansion program by breaking ground on a 7-story parking garage and the addition of 3 gates in Concourse C. Long range expansions include gates at Concourse B and the eventual construction of a new 14 gate Concourse D to be extended east from the present terminal.[citation needed]

A panorama of Palm Beach International Airport from what was the 391st Bomb Group Restaurant off of Southern Boulevard.

A new 240-foot (73 m) Airport Traffic Control tower is active on the north side of the airport (west of concourse A, off Belvedere Rd.) along with a single-story, 9,000-square-foot (840 m2) ATBM Base Building.[5] The current tower lies on the southern side of the airport.

The Palm Beach County Fire Rescue Aviation Battalion is located between runways at PBI. The station which is located near the center of the airport grounds, is home to 13 pieces of specialized fire fighting equipment.[6]

The Trauma Hawk Station, which is located at the south west corner of the airport, Palm Beach County Fire Rescue has two Sikorsky S-76C helos.[11] The department partners with the Palm Beach County Health Care District to operate the Trauma Hawk Aero-Medical Program.[12] The Trauma Hawk program, which was established in November 1990, replaced the use of Palm Beach County Sheriff's Office helicopters to medevac critically injured patients to area hospitals.[12] air ambulances are identically equipped and can carry two patients each and up to four medical attendants if needed.[11] Each helicopter is staffed with a pilot, a registered nurse (RN) and a paramedic. The nurses and paramedics are Palm Beach County Fire Rescue employees while the pilots are Health Care District employees.[12] 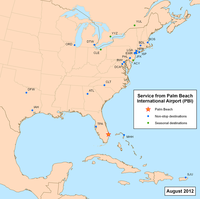 Destinations with direct service from PBI

Palm Tran buses No. 40 and No. 44 serve the airport. Both provide connections to the West Palm Beach Tri-Rail/Amtrak/Greyhound station.

Donald Trump sued to block the expansion of one of the runways at PBIA in 2010.[17] In 2015 he initiated a lawsuit over the flight path that passes over his Mar-A-Lago estate.[18]