Palmaria is an Italian island situated in the Ligurian Sea, at the westernmost end of the Gulf of La Spezia. Measuring 1.6 square kilometres (0.6 sq mi), it is the largest island of an archipelago of three closely spaced islands jutting out south from the mainland at Portovenere. The other islands, Tino, and the tiny Tinetto lie further south.

In 1997, the archipelago, together with Portovenere and the Cinque Terre, was designated by UNESCO as a World Heritage Site.

The Palmaria island with a surface area of 1.89 square kilometres (0.73 sq mi), is the largest of three islands in the Gulf of La Spezia and the Liguria region of the whole, the other two islands, Tino and Tinetto meet down a few hundred meters straight line to the south. The island has a triangular shape: the sides that face Portovenere and the Gulf of La Spezia are the most humanized and slope gently down to the level of the sea, covered by typical Mediterranean vegetation, the side that faces west, i.e. towards the open sea, is instead characterized by high cliffs overhanging the water, in which there are many caves. The sides humanized see the presence of some private homes, a restaurant (in Pozzale) and especially bathing establishments, both public and confidential employees of the Navy and Air Force. As for the western side, the most difficult to reach, are worthy of note the Blue Cave, visited by boat, and the Cave of Pigeons, which can be reached only by climbing down ropes. The latter in particular has been very important in the study of historical events in the Gulf, as have been found inside the fossilized bones of Pleistocene animals such as chamois and the snowy owl, but above all remains of human burials, testifying the presence of man at least five thousand years ago. On the island there are also many buildings of a military character and of great historical interest: the top, inaccessible as a former military area and is currently in a state of neglect, the Fort Count of Cavour (or Fort Palmaria), the battery now used as experimental environmental education center and Batteria Semaforo near the Scola Tip, the tower ironclad Umberto I and used in World War II to a military prison and renovated a few years ago and the remains of the battery Albini, scattered throughout the island, several bunkers from the Second World War and the remains of coastal artillery and antiaircraft mostly inaccessible since abandoned and submerged vegetation. Remarkable is the presence (in the south, called Pozzale) of an abandoned quarry, once used for the extraction of the precious black marble with streaks of gold portoro said. There are still remnants of cranes and hoists used for moving the blocks of marble and the walls of the houses of the miners.[1] 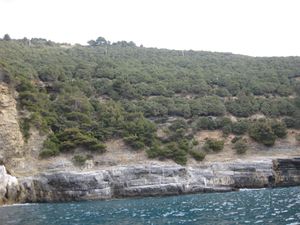 The flora of Palmaria is composed of about 500 species. The original vegetation, which was to be formed mainly from the Mediterranean and the forest of oak, was modified to anthropogenic causes such as fire, agriculture, introduction of alien plants and animals (plane trees, palms and rabbits). Today the pines (Pinus pinaster and Pinus halepensis) share space with typical Mediterranean species such as oak (Quercus ilex), oak (Quercus pubescens), mastic (Pistacia lentiscus), strawberry tree (Arbutus unedo), the cysts (Cistus monspeliensis, salvifolius Cistus, Cistus incanus), the gorse (Spartium junceum), etc.. Other important groups are the spot to plant spurge (Euphorbia dendroides) and nearest to the sea cliffs on those characterized by samphire (Crithmum maritimum). Among the new flora should be noted Centaurea cineraria veneris, Iberis umbellata var. linifolia, exclusive in Palmaria, Centaurea aplolepa lunensis, endemic in eastern Liguria. Finally, also worth Brassica oleracea robertiana, Serapias neglecta and Cistus incanus, rare in Liguria, where it reaches its northern limit.

On the island there are some of the largest reptile wildlife emergencies, such as tarantolino Phyllodactylus europaeus, the smallest of the European geckos, easily recognizable by the absence of tubercles on the dorsal side. In addition to the islands of Tino and Tinetto geconide this is present in very few other sites in Liguria. Between the birds deserve to be mentioned the kestrel (Falco tinnunculus), peregrine falcon (Falco peregrinus), sparrowhawk (Accipiter nisus), the red partridge (Alectoris rufa), gulls (Larus argentatus, Larus michahellis), the raven (Corvus corax), rock thrushes (Monticola solitarius), cormorant or shag (Phalacrocorax aristotelis). Between the mammals you mention the bats found in caves: the trunnion (Plecotusauritus), the Greater Horseshoe Bat or greater horseshoe bat (Rhynolophus ferrumequinum), the lower Horseshoe Bat (Rhynolophus hipposideros). There are colonies of rabbits and goats, remains of a recent past when the island was inhabited more than now. Between the invertebrates on the islands is to report the beetle Parmenas Solieri, an endemic species linked to the Tyrrhenian patch of spurge.

The climate is typically Mediterranean, with a temperature range, both daily and seasonal. In winter there are very few episodes of extreme cold and frost, while in summer the heat is damped by the effect of sea breeze, the modeled rainfall trends on the Riviera di Levante, presenting abundant, especially in autumn and spring. For the maritime links is possible reach the island by private boat or, in the summer months, with ferries that connect to Portovenere, Lerici and La Spezia.