A. J. Palumbo Center is a 4,406-seat multi-purpose arena in the Uptown area of Pittsburgh, Pennsylvania served by exits on both Interstate 376 and Interstate 579. The arena opened in 1988, and is part of Duquesne University. It is home to the Duquesne Dukes basketball, volleyball and wrestling programs. The center hosts concerts, boxing, and other special events, and is capable of converting the seating arrangement into a sport, stage, or theatre setup.[3] The facility was named in honor of its benefactor, Antonio J. Palumbo, who was elected to the Duquesne University board of directors and, in 1987, received an honorary doctorate of Business and Administration from Duquesne. Performance Magazine, a concert trade magazine, has consistently ranked the Palumbo Center as one of the top 10 grossing arenas of its size since its opening in 1988.[4]

In 2006, the Palumbo Center underwent major renovations. In addition to resurfacing the basketball court, upgrading video monitors, and replacing some seating sections, the facility was updated and renovated to include:

The center houses the administrative offices for the athletic department and facility management. The center is also open to intramural sports and other recreation groups, however, in 2007, Duquesne University completed a new five story recreational facility on Forbes Ave near the A.J. Pablumbo Center, which has now become the primary facility for recreational sports and activities.

After the 2009-2010 basketball season, Duquesne University began major renovations on the Palumbo Center. A new center-hung scoreboard was installed as well as new corner scoreboards. In addition, current bleacher seating on the north end of the arena was replaced with permanent stadium chairs. The University also received $1.8 million in private donations to upgrade the locker-rooms for the men's and women's basketball teams and the volleyball team. It will be called the James and Janice Schaming Athletic Center, named after the largest donor.[5]

Prior to the building of the facility, the men's basketball team played games at various sites around the city, including Pittsburgh Civic Arena (their exclusive home from 1964 to 1988, and used for occasional big games until 2009), Fitzgerald Field House, and Duquesne Gardens, as well as several high school gymnasiums. The first men's basketball game was played in the arena on December 3, 1988, in which Duquesne defeated St. Joseph's 73-69. As of January 2008, Duquesne men's basketball had 132-125 (.514) all-time record at the Palumbo Center.[6] The facility is used for most major sports at Duquesne, and has played host to NIT games, WNIT games, high school post season championships, national wrestling championships, and Atlantic 10 tournament competitions. During the 1994-95 basketball season, the Palumbo Center was the home of the Continental Basketball Association's Pittsburgh Piranhas. In the team's lone season in Pittsburgh, the Piranhas lost to the Yakima Sun Kings in the 1995 CBA finals. The new CONSOL Energy Center is now the home to the annual Pitt Panthers-Duquesne Dukes City Game[7] as well as basketball games of regional interest, such as a men's game played on December 12, 2010 between the West Virginia Mountaineers and Duquesne.[8]

The Palumbo Center is also home to the women's volleyball team and hosted the Atlantic 10 Championship in 2012, won by Temple. 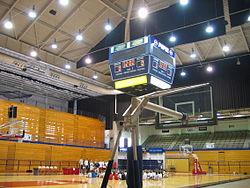