The Pamir Mountains are a mountain range in Central Asia at the junction of the Himalayas with the Tian Shan, Karakoram, Kunlun, and Hindu Kush ranges. They are among the world’s highest mountains, and since Victorian times, they have been known as the "Roof of the World", presumably a translation from Persian.[1][2]

The precise extent of the Pamir Mountains is debatable.[5] They lie mostly in Gorno-Badakhshan province of Tajikistan. To the north they join the Tian Shan mountains along the Alay Valley of Kyrgyzstan. To the south they border the Hindu Kush mountains along Afghanistan's Wakhan Corridor. To the east they are generally considered to extend to the range that includes China's Kongur Tagh, a peak which is included in the "Eastern Pamirs" [6] more often than in the Kunlun Mountains, as Kongur Tagh and the Kunlun range are separated by the large Yarkand River valley; no valley of such significance separates the Pamirs and Kongur Tagh, just political boundaries. 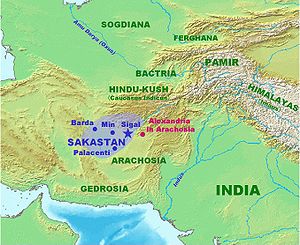 Pamir Mountains on map showing Sakastan about 100BC

There are many glaciers in the Pamir Mountains, including the 77 km (48 mi) long Fedchenko Glacier, the longest in the former USSR and the longest glacier outside the Polar region.[8] 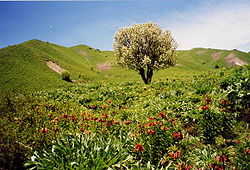 Part of the Pamir Mountain range in springtime.

Covered in snow throughout the year, the Pamirs have long and bitterly cold winters, and short, cool summers. Annual precipitation is about 130 mm (5 in), which supports grasslands but few trees.[9]

Paleoclimatology: The East-Pamir during the Ice Age

The East-Pamir, in the centre of which the massifs of Mustagh Ata (7620 m) and Kongur Tagh (Qungur Shan, 7578, 7628 or 7830 m) are situated, shows from the W-margin of the Tarim Basin an East-West extension of c. 200 km. Its North-South extension from King Ata Tagh up to the North-West Kunlun foothills amounts to c.170 km. Whilst the up to 21 km long current valley glaciers are restricted to mountain massifs exceeding 5600 m in height, during the Last Glacial Period the glacier ice has covered the high plateau with its set-up highland relief, continuing west of Mustagh Ata and Kongur. From this glacier area an outlet glacier has flowed down to the north-east through the Gez valley up to c.1850 m asl and thus as far as to the margin of the Tarim basin. This outlet glacier received inflow from the Kaiayayilak glacier from the Kongur-north-flank. From the north-adjacent Kara Bak Tor (Chakragil, c. 6800 or 6694 m)-massif the Oytag valley glacier in the same exposition flowed also down up to c. 1850 m asl. At glacial times the glacier snowline (ELA) as altitude limit between glacier nourishing area and ablation zone, was lowered about 820 to 1250 altitude metres against today.[10][11] Under the condition of comparable proportions of precipitation there results from this a glacial depression of temperature of at least 5 to 7.5 °C.

Coal is mined in the west, though sheep herding in upper meadowlands are the primary source of income for the region.

This section is based on the book by R. Middleton and H. Thomas[12] 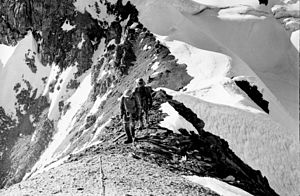 Expedition in 1982 to Tartu Ülikool 350 Peak, that was considered to be the highest unreached peak in the territory of former Soviet Union at the time.

The lapis lazuli found in Egyptian tombs is thought to come from the Pamir area in Badakhshan province of Afghanistan. About 138 BC Zhang Qian reached the Fergana Valley northwest of the Pamirs. Ptolemy vaguely describes a trade route through the area. From about 600 AD, Buddhist pilgrims travelled on both sides of the Pamirs to reach India from China. In 747 a Tang army was on the Wakhan River. There are various Arab and Chinese reports. Marco Polo may have travelled along the Panj River. In 1602 Bento de Goes travelled from Kabul to Yarkand and left a meager report on the Pamirs. In 1838 Lieutenant John Wood reached the headwaters of the Pamir River. From about 1868 to 1880, a number of Indians in the British service secretly explored the Panj area. In 1873 the British and Russians agreed to an Afghan frontier along the Panj River. From 1871 to around 1893 several Russian military-scientific expeditions mapped out most of the Pamirs (Alexei Pavlovich Fedchenko, Nikolai Severtzov, Captain Putyata and others. Later came Nikolai Korzhenevskiy). Several local groups asked for Russian protection from Afghan raiders. The Russians were followed by a number of non-Russians including Ney Elias, George Littledale, the Earl of Dunmore, Wilhelm Filchner and Lord Curzon who was probably the first to reach the Wakhan source of the Oxus River. In 1891 the Russians informed Francis Younghusband that he was on their territory and later escorted a Lieutenant Davidson out of the area ('Pamir Incident'). In 1892 a battalion of Russians under Mikhail Ionov entered the area and camped near the present Murghab. In 1893 they built a proper fort there (Pamirskiy Post). In 1895 their base was moved to Khorog facing the Afghans.

In 1928 the last blank areas around the Fedchenko Glacier were mapped out by a German-Soviet expedition under Willi Rickmer Rickmers.

According to Middleton and Thomas, "pamir" is also a geological term.[12] A pamir is a flat plateau or U-shaped valley surrounded by mountains. It forms when a glacier or ice field melts leaving a rocky plain. A pamir lasts until erosion forms soil and cuts down normal valleys. This type of terrain is found in the east and north of the Wakhan,[13] and the east and south of Gorno-Badakhshan, as opposed to the valleys and gorges of the west. Pamirs are used for summer pasture.[12][13]

The Great Pamir is around Lake Zorkul. The Little Pamir is east of this in the far east of Wakhan.[13] The Taghdumbash Pamir is between Tashkurgan and the Wakhan west of the Karakoram Highway. The Alichur Pamir is around Yashil Kul on the Gunt River. The Sarez Pamir is around the town of Murghab. The Khargush Pamir is south of Lake Karakul. There are several others.

The Pamir River is in the south-west of the Pamirs. 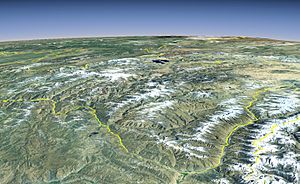 In the early 1980s, a deposit of gemstone-quality clinohumite was discovered in the Pamir Mountains. It was the only such deposit known until the discovery of gem-quality material in the Taymyr region of Siberia, in 2000.[citation needed]

The Pamir Highway, the world's second highest international road, runs from Dushanbe in Tajikistan to Osh in Kyrgyzstan through the Gorno-Badakhshan Autonomous Province, and is the isolated region's main supply route. The Great Silk Road crossed a number of Pamir Mountain ranges.[14]

In December 2009, the New York Times featured articles on the possibilities for tourism in the Pamir area of Tajikistan.[15][16] 2013 proved to be the most successful year ever for tourism in the region and tourism development continues to be the fastest growing economic sector. The META (Murghab Ecotourism Association) website (www.meta.tj) provides an excellent repository of tourism related resources for the Eastern Pamir region. 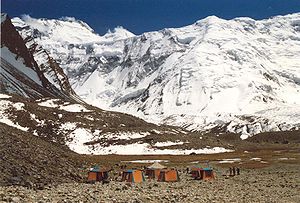 Ismoil Somoni Peak (then known as Peak Communism) taken in 1989 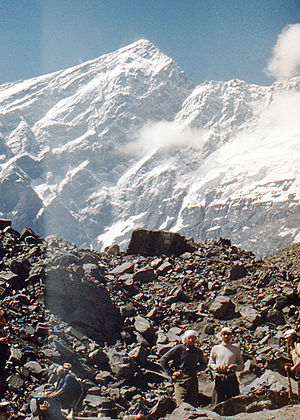 Climbers near "Peak Communism" in 1978 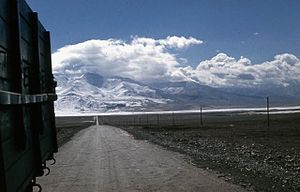 Historically, the Pamir Mountains were considered a strategic trade route between Kashgar and Kokand on the Northern Silk Road and have been subject to numerous territorial conquests. The Northern Silk Road (about 2,600 km (1,616 mi) in length) connected the ancient Chinese capital of Xi'an over the Pamir Mountains towards the west to emerge in Kashgar before linking to ancient Parthia.[17] In the 20th century, they have been the setting for Tajikistan Civil War, border disputes between China and Soviet Union, establishment of US, Russian, and Indian military bases,[18] and renewed interest in trade development and resource exploration.[19][20]