Pan-Africanism is an ideology and movement that encourages the solidarity of Africans worldwide.[1] It is based on the belief that unity is vital to economic, social, and political progress and aims to "unify and uplift" people of African descent.[2] The ideology asserts that the fate of all African peoples and countries are intertwined. At its core Pan-Africanism is "a belief that African peoples, both on the continent and in the diaspora, share not merely a common history, but a common destiny".[3]

The Organization of African Unity (now the African Union) was established in 1963 to safeguard the sovereignty and territorial integrity of its Member States and to promote global relations within the framework of the United Nations.[4] The African Union Commission has its seat in Addis Ababa and the Pan-African Parliament has its seat in Johannesburg and Midrand.

Pan-Africanism stresses the need for "collective self-reliance".[5][non-primary source needed] Pan-Africanism exists as a governmental and grassroots objective. Pan-African advocates include leaders such as Haile Selassie, Ahmed Sekou Toure, Kwame Nkrumah and Muammar Gaddafi, grassroots organizers such as Marcus Garvey and Malcolm X, academics such as W. E. B. Du Bois, and others in the diaspora.[6][7][8] Solidarity will enable self-reliance, allowing the continent's potential to independently provide for its people to be fulfilled. Crucially, an all-African alliance would empower African people globally.

The realization of the Pan-African objective would lead to "power consolidation in Africa", which "would compel a reallocation of global resources, as well as unleashing a fiercer psychological energy and political assertion...that would unsettle social and political (power) structures...in the Americas".[9][page needed] United, African nations will have the economic, political and social clout to act and compete on the world stage as do other large entities, such as the European Union and the United States.

Advocates of Pan-Africanism – i.e. "Pan-Africans" or "Pan-Africanists" - often champion socialist principles and tend to be opposed to external political and economic involvement on the continent. Critics accuse the ideology of homogenizing the experience of people of African descent. They also point to the difficulties of reconciling current divisions within countries on the continent and within communities in the diaspora.[9][page needed]

As a philosophy, Pan-Africanism represents the aggregation of the historical, cultural, spiritual, artistic, scientific, and philosophical legacies of Africans from past times to the present. Pan-Africanism as an ethical system traces its origins from ancient times, and promotes values that are the product of the African civilizations and the struggles against slavery, racism, colonialism, and neo-colonialism.[6]

Alongside a large number of slave insurrections, by the end of the 18th century a political movement developed across the Americas, Europe and Africa that sought to weld these disparate movements into a network of solidarity putting an end to this oppression. In London, the Sons of Africa was a political group addressed by Quobna Ottobah Cugoano in the 1791 edition of his book Thoughts and Sentiments on the Evil of Slavery. The group addressed meetings and organised letter-writing campaigns, published campaigning material and visited parliament. They wrote to figures such as Granville Sharp, William Pitt and other members of the white abolition movement, as well as King George III and the Prince of Wales, the future George IV.

In the United States, the term is closely associated with Afrocentrism, an ideology of African-American identity politics that emerged during the civil rights movement of the 1960s to 1970s.[12][page needed] 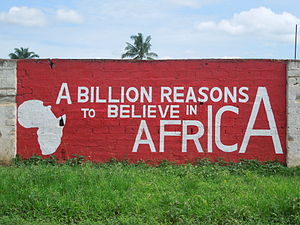 A mural in western Tanzania.

As originally conceived by Henry Sylvester-Williams (note: some history books credit this idea to Edward Wilmot Blyden), Pan-Africanism referred to the unity of all continental Africa.[13]

During apartheid South Africa there was a Pan Africanist Congress that dealt with the oppression of Africans in South Africa under Apartheid rule. Other pan-Africanist organizations include Garvey's Universal Negro Improvement Association-African Communities League, TransAfrica and the International People's Democratic Uhuru Movement.

Additionally, Pan-Africanism is seen as an endeavour to return to what are deemed by its proponents singular, traditional African concepts about culture, society, and values. Examples of this include Léopold Sédar Senghor's Négritude movement, and Mobutu Sese Seko's view of Authenticité.

An important theme running through much pan-Africanist literature concerns the historical links between different countries on the continent, and the benefits of cooperation as a way of resisting imperialism and colonialism.

In the 21st century, some Pan-Africans aim to address globalisation and the problems of environmental justice. For instance, at the conference "Pan-Africanism for a New Generation"[14] held at the University of Oxford, June 2011, Ledum Mittee, the current president of the Movement for the Survival of the Ogoni People (MOSOP), argues that environmental justice movements across the African continent should create horizontal linkages in order to better protect the interests of threatened peoples and the ecological systems in which they are embedded, and upon which their survival depends.

Some universities have gone as far as creating "Departments of Pan-African Studies" in the late 1960s. This includes the California State University, where that department was founded in 1969 as a direct reaction to the civil rights movement, and is today dedicated to "teaching students about the African World Experience", to "demonstrate to the campus and the community the richness, vibrance, diversity, and vitality of African, African American, and Caribbean cultures" and to "presenting students and the community with an Afrocentric analysis" of anti-black racism.[15] Syracuse University also offers a master's degree in "Pan African Studies".[16] 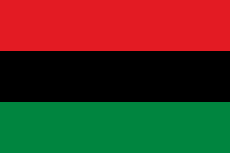 The red, black, and green Pan-African flag designed by the UNIA in 1920.

The Pan-African flag, also known as the UNIA (Universal Negro Improvement Association) flag, is a tri-color flag consisting of three equal horizontal bands of (from top down) red, black and green. The UNIA formally adopted it on August 13, 1920,[17] during its month-long convention at Madison Square Garden in New York City.[18][19]

Variations of the flag have been used in various countries and territories in Africa and the Americas to represent Pan-Africanist ideologies.[citation needed] Among these are the flags of Malawi, Kenya and Saint Kitts and Nevis. Several Pan-African organizations and movements have also often employed the emblematic red, black and green tri-color scheme in variety of contexts.

Additionally, the flags of a number of nations in Africa and of Pan-African groups use green, yellow and red. This color combination was originally adopted from the 1897 flag of Ethiopia, and was inspired by the fact that Ethiopia is the continent's oldest independent nation.[20]

Maafa is an aspect of Pan-African studies. The term collectively refers to 500 years of suffering (including the present) of people of African heritage through slavery, imperialism, colonialism, and other forms of oppression.[21][22] In this area of study, both the actual history and the legacy of that history are studied as a single discourse. The emphasis in the historical narrative is on African agents, as opposed to non-African agents.[citation needed] 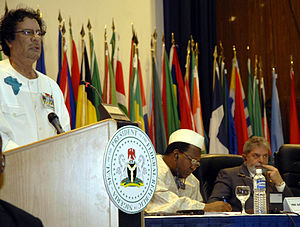 Muammar Gaddafi at the first Africa-Latin America summit in 2006 in Abuja, Nigeria.

During the past three decades hip hop has emerged as a powerful force shaping black and African identities worldwide. In his 2005 article "Hip-hop Turns 30: Whatcha Celebratin' For?", Greg Tate describes hip-hop culture as the product of a Pan-African state of mind.[28] It is an "ethnic enclave/empowerment zone that has served as a foothold for the poorest among us to get a grip on the land of the prosperous".[28] Hip-hop unifies those of African descent globally in its movement towards greater economic, social and political power. Andreana Clay in her article "Keepin' it Real: Black Youth, Hip-Hop Culture, and Black Identity" states that hip-hop provides the world with "vivid illustrations of Black lived experience", creating bonds of black identity across the globe.[29] Hip hop authenticates a black identity, and in doing so, creates a unifying uplifting force among Africans as Pan-Africanism sets out to achieve.