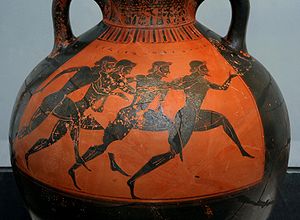 Greek vase depicting runners at the Panathenaic Games c. 530 BC

The Panathenaic Games were held every four years in Athens in Ancient Greece since 566 BC.[1] They continued into the 3rd century AD.[2] These Games incorporated religious festival, ceremony (including prize-giving), athletic competitions, and cultural events hosted within a stadium.

The competitions for which this festival came to be known were only part of a much larger religious occasion; the Great Panathenaea itself. These ritual observances consisted of numerous sacrifices to Athena (the name-sake of the event and patron deity to the hosts of the event - Athens) as well as Poseidon and others. A sister-event to the Great Panathenaea was held every year - the Lesser Panathenaea, which was 3–4 days shorter in celebration. They were the most prestigious games for the citizens of Athens, but they were not as important as the Olympic Games or the other Panhellenic Games.

The first Great Panathenaea was held during the rule of Peisistratos in 566 BC, and was modelled on the Olympic Games. Peisistratos also added music and poetry competitions, which were part of the Pythian Games but not the Olympics. The games were divided into games for Athenians only, and games for Athenians and any other Greeks who wanted to participate. The games for all Greeks were essentially the same as the Olympics, with boxing, wrestling, pankration, pentathlon, and chariot racing, but chariot racing was the most prestigious of these, unlike the Olympics where the stadion (foot race) was more important.

These games in which only the Athenians were allowed to participate were somewhat different. These included a torch race from the Piraeus to the Acropolis, mock infantry and cavalry battles, a javelin throw on horseback, the apobatai (a chariot race in which the driver had to jump out of the chariot, run alongside, and jump back in), the pyrriche (apparently military exercises accompanied by music), and the euandrion (essentially a contest of manliness and strength between young Athenian men). The prestigious event was a four-horse chariot race and the winner received a prize larger than for any of the athletic contests.[3] In later years there was also a rowing competition.

The procession to the Parthenon was more important than the games themselves. During the Great Panathenaia, a special robe (the peplos) was made by the women of Athens for the statue of Athena, which was carried to the Parthenon as part of the procession. There was also a large sacrifice made to Athena, the hekatombe ("sacrifice of a hundred oxen") and the meat from the sacrificed animals was used in an enormous banquet on the final night of the festival, the pannychis (Greek παννυχίς, "all-nighter"). Many scholars believe that this procession is the theme of the inner Ionic Parthenon Frieze, highlighting its importance to the Athenian people to warrant inclusion in a temple.

The Panathenaea also included poetic and musical competitions. Prizes were awarded for rhapsodic recitation of Homeric poetry, for instrumental music on the aulus and cithara, and for singing to the accompaniment of the aulus and cithara (citharody). In addition, the Games included a reading of both the Odyssey and the Iliad.

The Panathenaic Games held contests in a number of musical, athletic, and equestrian events. Due to the fact that there were so many contests held, the games usually lasted a little over a week. On a fourth century marble block, experts explain that on the block is written a program for the games, as well as individual events and their prizes. The inscription also says that there are two age categories for the music events but three age categories for the athletic events. According to scholars, the age groups are boys: 12-16; beardless youths: 16-20; men: over 20.[6] One thing that was different about these games than normal funeral games is that prizes were given to runner ups, not just the lone victor.

Using the inscription, experts put together a general program like so: Day 1: Musical and Rhapsodic Contest; Day 2: Athletic Contest for Boys and Youths; Day 3: Athletic Contest for Men; Day 4: Equestrian Contest; Day 5: Tribal Contest; Day 6: Torch Race and Sacrifice; Day 7: Boat Race; Day 8: Awarding of Prizes, Feasting and Celebrations.[6] Experts reasonably came up with how the games went based on the order of prizes which were written on the marble block.

The musical events which took place were Kithara players, Flute players, and singers. The athletic events were the stadion, pentathlon, wrestling, boxing, and pankration. The equestrian events were two-horse chariot race, horse race, and javelin throw on horseback. Based on the inscription, we learn that the prizes given to the men and the youth were different. Men were rewarded a certain amount of drachmas and/or a valuable crown worth a certain amount of drachmas. Boys and youths were given a certain number of amphoras of olive oil.[6]