From Infogalactic: the planetary knowledge core
(Redirected from Pancoran)
Jump to: navigation, search
For other uses, see Pancoran (disambiguation).

Pancoran is a subdistrict of South Jakarta, one of the five administrative cities which form Jakarta, Indonesia. Pancoran Subdistrict was originally part of Mampang Prapatan Subdistrict until it was divided in 1985.[citation needed]

The boundaries of Pancoran Subdistrict are Ciliwung River to the east, Mampang River to the west, and Kapten Tendean Road - Jend. Gatot Subroto - Letjen. Haryono MT. Tollway to the north.

The Subdistrict of Pancoran is divided into six kelurahan or administrative villages: 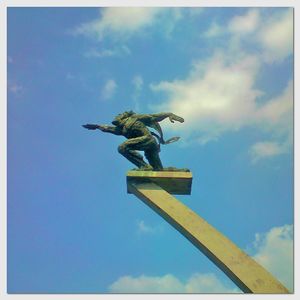 Statue of Dirgantara, a landmark associated with Pancoran Subdistrict.