From Infogalactic: the planetary knowledge core
(Redirected from Panhandle)
Jump to: navigation, search

A salient is an elongated protrusion of a geopolitical entity, such as a subnational entity or a sovereign state.

While similar to a peninsula in shape, a salient is not surrounded by water on three sides and connected to a geographical mainland. Instead, it is delimited by a land border on at least two sides and extends out from the larger geographical body of the administrative unit.

In American English the term panhandle is often used to describe Florida or a similar shape. Less common descriptors include chimney (if protruding northward, as a chimney does from a roof) and bootheel (if protruding southward, as the heel underneath a boot).

The term salient is derived from military salients. The term "panhandle" derives from the analogous part of a cooking pan, and its use is generally confined to the United States.

The salient shape is the result of arbitrarily drawn international or subnational boundaries, although the location of some administrative borders takes into account other considerations such as economic ties or topography.

Panhandles in the United States 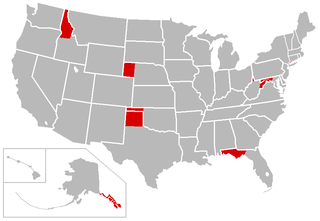 Locations of panhandles within states of the USA

Many people in the Pacific Northwest refer to the extreme northern section of Idaho's panhandle as "The Chimney", due to its resemblance to a chimney when viewed on maps.[citation needed]

The northern segment of the borough of Manhattan in New York City represents a geographic panhandle as well.[citation needed]

Although Utah, like Nebraska, has a protrusion from its otherwise straight border, it is not usually considered a panhandle.