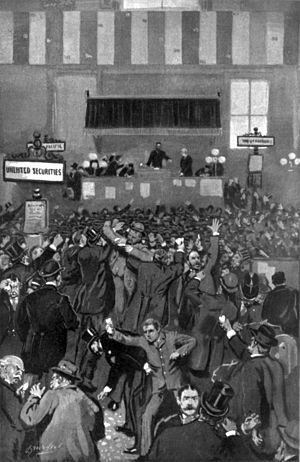 Drawing of frenzied stockbrokers on May 5, 1893, from Frank Leslie's Illustrated Newspaper

The panic of 1893 was a serious economic depression in the United States that began in 1893.[1]

One of the causes for the panic of 1893 can be traced back to Argentina. Investment was encouraged by the Argentine agent bank, Baring Brothers. However, the failure of the 1890 wheat crop and a coup in Buenos Aires ended further investments. Because European investors were concerned that these problems might spread, they started a run on gold in the U.S. Treasury, since it was comparatively simple for them to cash in their dollar investments for exportable gold.[2] During the Gilded Age of the 1870s and 1880s, the United States had experienced economic growth and expansion, but much of this expansion depended on high international commodity prices and in 1893 wheat prices crashed.[3]

One of the first clear signs of trouble came on February 20, 1893,[4] thirteen days before the inauguration of U.S. president Grover Cleveland, with the appointment of receivers for the Philadelphia and Reading Railroad, which had greatly overextended itself.[5] Upon taking office, Cleveland dealt directly with the Treasury crisis,[6] and successfully convinced Congress to repeal the Sherman Silver Purchase Act, which he felt was mainly responsible for the economic crisis.[7]

As concern for the state of the economy worsened, people rushed to withdraw their money from banks, and caused bank runs. The credit crunch rippled through the economy. A financial panic in the United Kingdom and a drop in trade in Europe caused foreign investors to sell American stocks to obtain American funds backed by gold.[8]

The Populists were a short-lived agrarian-populist political party which appealed politically to wheat farmers in the West and poor cotton farmers in the South. They saw the resulting panic as confirmation that the values of rootless global finance were assailing traditional American values. Also, historian Hasia Diner notes, "Some Populists believed that Jews made up a class of international financiers whose policies had ruined small family farms. Jews, they asserted, owned the banks and promoted the gold standard, the chief sources of their impoverishment. Agrarian radicalism posited the city as antithetical to American values, asserting that Jews were the essence of urban corruption."[9]

The Free Silver movement arose, gaining support from farmers (who sought to invigorate the economy and cause inflation, thus allowing them to repay their debt with cheaper dollars) and mining interests (who sought the right to turn silver directly into money). The Sherman Silver Purchase Act of 1890, while falling short of the Free Silver movement's goals, required the U.S. government to buy millions of ounces of silver above what was required by the 1878 Bland-Allison Act (driving up the price of the metal and pleasing silver miners). People attempted to redeem silver notes for gold. Ultimately, the statutory limit for the minimum amount of gold in federal reserves was reached and U.S. notes could no longer be successfully redeemed for gold.[8] Investments during the time of the panic were heavily financed through bond issues with high interest payments. The National Cordage Company (the most actively traded stock at the time) went into receivership as a result of its bankers calling their loans in response to rumors regarding the NCC's financial distress. The company, a rope manufacturer, had tried to corner the market for imported hemp. As the demand for silver and silver notes fell, the price and value of silver dropped. Holders worried about a loss of face value of bonds and many became worthless.

A series of bank failures followed, and the Northern Pacific Railway, the Union Pacific Railroad and the Atchison, Topeka & Santa Fe Railroad failed. This was followed by the bankruptcy of many other companies; in total over 15,000 companies and 500 banks, many of them in the west, failed. According to high estimates, about 17%–19% of the workforce was unemployed at the panic's peak. The huge spike in unemployment, combined with the loss of life savings kept in failed banks, meant that a once-secure middle-class could not meet their mortgage obligations. Many walked away from recently built homes as a result.[10]

File:War of wealth bank run poster.jpg
The 1896 Broadway melodrama The War of Wealth was inspired by the panic of 1893.

As a result of the panic, stock prices declined. 500 banks closed, 15,000 businesses failed, and numerous farms ceased operation. The unemployment rate hit 25% in Pennsylvania, 35% in New York, and 43% in Michigan. Soup kitchens were opened to help feed the destitute. Facing starvation, people chopped wood, broke rocks, and sewed in exchange for food. In some cases, women resorted to prostitution to feed their families. To help the people of Detroit, Mayor Hazen Pingree started "Pingree's Potato Patch" which were community gardens for farming.[11]

The Sherman Silver Purchase Act of 1890, perhaps along with the protectionist McKinley Tariff of that year, has been partially blamed for the panic. Passed in response to a large overproduction of silver by western mines, the Sherman Act required the U.S. Treasury to purchase silver using notes backed by either silver or gold. The Democrats and President Cleveland were blamed for the depression. The decline of the gold reserves stored in the Treasury fell to a dangerously low level. This forced President Cleveland to borrow $65 million in gold from Wall-Street banker J.P. Morgan and the Rothschild banking family of England[12] to support the gold standard.[13] In the ensuing 1894 elections, the Democrats and Populists lost heavily. The election marked the largest Republican gains in history.[14]