From Infogalactic: the planetary knowledge core
Jump to: navigation, search
For other uses, see Pankow (disambiguation).

Pankow (German pronunciation: [ˈpaŋkoː]) is the most populous and the second-largest borough of Berlin. In Berlin's 2001 administrative reform it was merged with the former boroughs of Prenzlauer Berg and Weißensee; the resulting borough retained the name Pankow.

The borough, named after the Panke river, covers the northeast of the city region, including the inner city locality of Prenzlauer Berg. It borders Mitte and Reinickendorf in the west, Friedrichshain-Kreuzberg in the south, and Lichtenberg in the east. Pankow is Berlin's largest borough by population and the second largest by area (after Treptow-Köpenick).

Between 1945 and 1960, Schönhausen Palace and the nearby Majakowskiring street in the Niederschönhausen locality of Pankow was the home to many members of the East German government. Western writers therefore often referred to Pankow as a metonym for the East German regime—as reflected by Udo Lindenberg's song Sonderzug nach Pankow.

The Rykestrasse Synagogue, Germany's largest synagogue, is located in the Prenzlauer Berg locality. The Weißensee Cemetery is one of the largest Jewish cemeteries in Europe. In northern Prenzlauer Berg, the Wohnstadt ("residential town") Carl Legien is part of the Berlin Modernist Housing Estates UNESCO World Heritage Site. The Weißer See is the borough's largest natural body of water. 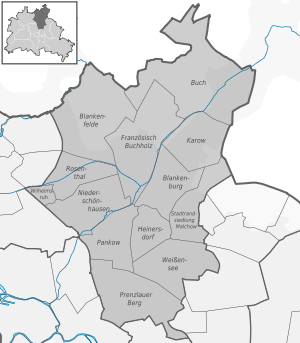 The Pankow borough consists of 13 localities: 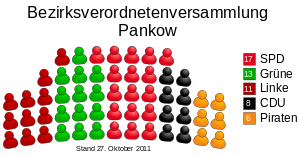 At the 2011 elections for the parliament of the borough (Bezirksverordnetenversammlung) the following parties were elected:

The Pankow locality is served by the U2 line of the Berlin U-Bahn at the stations Vinetastraße and Pankow. S-Bahn service is available at the Berlin-Pankow, Pankow-Heinersdorf and Wollankstraße railway stations. Another connection to Berlin's inner city is also provided by the M1 line of the Berlin Straßenbahn.

The Bundesstraße 96a federal highway from Berlin toward Oranienburg runs through the locality along Mühlenstraße and Schönholzer Straße. Furthermore, Pankow can be reached via the Bundesautobahn 114 from the Berliner Ring at the Prenzlauer Promenade junction.