Panmunjom, now located in North Hwanghae Province, is an abandoned village just north of the de facto border between North and South Korea, where the 1953 Korean Armistice Agreement that paused the Korean War was signed. The building where the armistice was signed still stands, though it is north of the Military Demarcation Line, which runs through the middle of the Demilitarized Zone.

Its name is often used as a metonym for the nearby Joint Security Area (JSA), where discussions between North and South Korea still take place in blue buildings that straddle the Military Demarcation Line. As such, it is considered one of the last vestiges of the Cold War.

The site of the former village is 53 kilometers north-northwest of Seoul and 10 kilometers east of Kaesong and was the meeting place of the Military Armistice Commission. The meetings took place in several tents set up on the north side of the Kaesong-Seoul road on the west bank of the Sa'cheon stream.

The village, a small cluster of fewer than ten huts, was opposite the negotiation site on the south side. The eighteen copies of Volume I and II of the armistice were signed by the Senior Delegates of each side in a building constructed by both sides over a 48-hour period. (North Korea provided labor and some supplies, the United Nations Command provided some supplies, generators and lighting to allow the work to continue at night.)

After the Armistice Agreement was signed, construction began in September 1953 on a new site located approximately one kilometer east of the village; this is the Joint Security Area and all meetings between North Korea and the United Nations Command or South Korea have taken place here since its completion. The JSA is often metonymously referred to as Panmunjom.

After the war, when all civilians were removed from the DMZ (except for two villages near the JSA on opposite sides of the Military Demarcation Line), the empty village of Panmunjom fell in disrepair and eventually disappeared from the landscape. There is no evidence of it today. However, the building constructed for the signing of the armistice has since been renamed by North Korea as the Peace Museum. 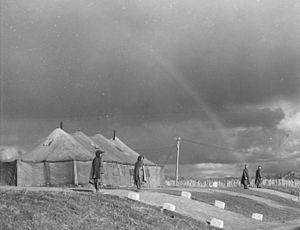 Site of negotiations in 1951 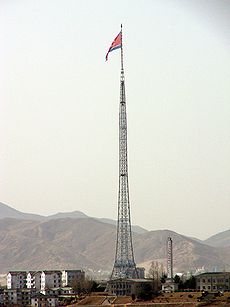 United Nations forces met with North Korean and Chinese officials at Panmunjom from 1951 to 1953 for truce talks. The talks dragged on for several months. The main point of contention during the talks was the question surrounding the prisoners of war. Moreover, South Korea was uncompromising in its demand for a unified state. On June 8, 1953, an agreement to the POW problem was reached.

Those prisoners who refused to return to their countries were allowed to live under a neutral supervising commission for three months. At the end of this time period, those who still refused repatriation would be released. Among those who refused repatriation were twenty two American and British POWs, all but two of whom chose to defect to the People's Republic of China.

A final armistice agreement was reached on July 27, 1953. The United Nations Command, Chinese Peoples Liberation Army and North Korea Peoples Army agreed to an armistice ending the fighting. The agreement established a 4 kilometer wide demilitarized zone along the armistice line, effectively dividing Korea into two separate countries. Although most troops and all heavy weapons were to be removed from the area, it has been heavily armed by both sides since the end of the fighting.

Villages within the DMZ: