From Infogalactic: the planetary knowledge core
Jump to: navigation, search
This article is about the Roman province. For other uses, see Pannonia (disambiguation).

Pannonia was an ancient province of the Roman Empire bounded north and east by the Danube, coterminous westward with Noricum and upper Italy, and southward with Dalmatia and upper Moesia. Pannonia was located over the territory of the present-day western Hungary, eastern Austria, northern Croatia, north-western Serbia, northern Slovenia, western Slovakia and northern Bosnia and Herzegovina.

Prior to Roman conquest

The first inhabitants of this area known to history were the Pannonii (Pannonians), a group of Indo-European tribes akin to Illyrians. From the 4th century BC it was invaded by various Celtic tribes. Little is heard of Pannonia until 35 BC, when its inhabitants, allies of the Dalmatians, were attacked by Augustus, who conquered and occupied Siscia (Sisak). The country was not, however, definitively subdued by the Romans until 9 BC, when it was incorporated into Illyricum, the frontier of which was thus extended as far as the Danube. 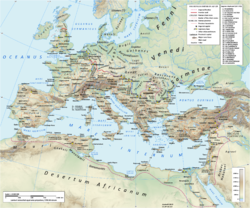 The Roman empire in the time of Hadrian (ruled 117-138 AD), showing, on the middle Danube river, the imperial provinces of Pannonia Superior and Pannonia Inferior and the 2 legions deployed in each in 125

In AD 6, the Pannonians, with the Dalmatians and other Illyrian tribes, engaged in the so-called Great Illyrian Revolt, and were overcome by Tiberius and Germanicus, after a hard-fought campaign which lasted for three years. After the rebellion was crushed in AD 9, the province of Illyricum was dissolved, and its lands were divided between the new provinces of Pannonia in the north and Dalmatia in the south. The date of the division is unknown, most certainly after AD 20 but before AD 50. The proximity of dangerous barbarian tribes (Quadi, Marcomanni) necessitated the presence of a large number of troops (seven legions in later times), and numerous fortresses were built on the bank of the Danube.

Some time between the years 102 and 107, between the first and second Dacian war, Trajan divided the province into Pannonia Superior (western part with the capital Carnuntum), and Pannonia Inferior (eastern part with the capitals in Aquincum and Sirmium[8]). According to Ptolemy, these divisions were separated by a line drawn from Arrabona in the north to Servitium in the south; later, the boundary was placed further east. The whole country was sometimes called the Pannonias (Pannoniae).

Pannonia Superior was under the consular legate, who had formerly administered the single province, and had three legions under his control; Pannonia Inferior at first under a praetorian legate with a single legion as garrison, after Marcus Aurelius under a consular legate, still with only one legion. The frontier on the Danube was protected by the establishment of the two colonies Aelia Mursia and Aelia Aquincum by Hadrian.

Under Diocletian a fourfold division of the country was made:

Diocletian also moved parts of today's Slovenia out of Pannonia and incorporated them in Noricum. Constantine I enlarged in 324 AD the borders of Roman Pannonia to the east, annexing the plains of what is now eastern Hungary, northern Serbia and western Romania up to the limes that he created: the Devil's Dykes.

In the 4th-5th century, one of the dioceses of the Roman Empire was known as the Diocese of Pannonia. It had its capital in Sirmium and included all four provinces that were formed from historical Pannonia, as well as the provinces of Dalmatia, Noricum Mediterraneum and Noricum Ripense. 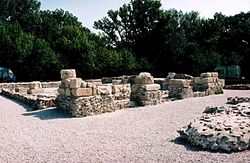 Following the Migrations Period in the middle of the 5th century, Pannonia was ceded to the Huns by Theodosius II. After the collapse of the Hunnic empire in 454, large numbers of Ostrogoths were settled by Emperor Marcian in province as foederati. The Eastern Roman Empire controlled it for a time in the 6th century, and a Byzantine province of Pannonia with capital in Sirmium was temporarily restored, but it included only a small south-eastern part of historical Pannonia.

Afterwards it was again invaded by the Avars in the 560s, the Slavs, who first settled c. 480s but became independent only since the 7th century, the Franks, who named a frontier march the March of Pannonia in the end of the 8th century, and the term Pannonia was also used for a Slavic duchy that was vassal to the Franks.

Furthermore, between the 5th and the 10th century the romanized population of Pannonia developed the Romance Pannonian Language, mainly around the lake Balaton in present-day western Hungary, where there was the keszthely culture. This language and the related culture were extinct with the arrival of the Magyars. 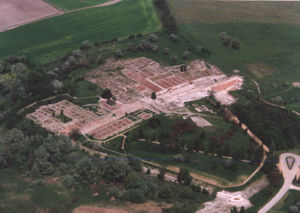 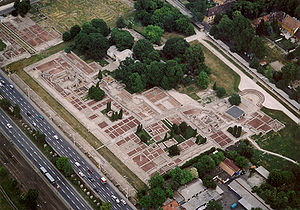 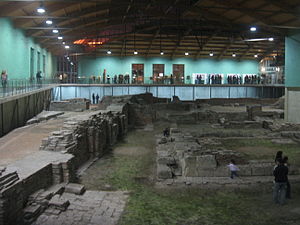 Ruins of Imperial Palace in Sirmium

The native settlements consisted of pagi (cantons) containing a number of vici (villages), the majority of the large towns being of Roman origin. The cities and towns in Pannonia were:

Now in Bosnia and Hercegovina: 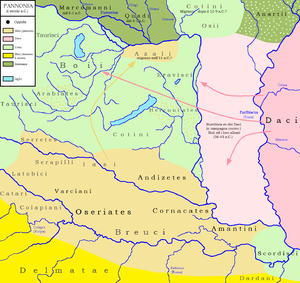 The country was fairly productive, especially after the great forests had been cleared by Probus and Galerius. Before that time timber had been one of its most important exports. Its chief agricultural products were oats and barley, from which the inhabitants brewed a kind of beer named sabaea. Vines and olive trees were little cultivated. Pannonia was also famous for its breed of hunting dogs. Although no mention is made of its mineral wealth by the ancients, it is probable that it contained iron and silver mines. Its chief rivers were the Dravus, Savus, and Arrabo, in addition to the Danuvius (less correctly, Danubius), into which the first three rivers flow.

The ancient name Pannonia is retained in the modern term Pannonian plain.