Pantelleria (Sicilian: Pantiddirìa), the ancient Cossyra (Maltese: Qawsra, now Pantellerija, Ancient Greek Kossyra, Κοσσύρα), is an Italian island in the Strait of Sicily in the Mediterranean Sea, 100 km (62 miles) southwest of Sicily and just 60 km (37 miles) east of the Tunisian coast that can even be spotted in the distance on clear days. Administratively Pantelleria is a comune belonging to the Sicilian province of Trapani.

With an area of 83 square kilometres (32 sq mi), it is the largest volcanic satellite island of Sicily. The last eruption occurred in 1891 below sea level, and even today phenomena related to volcanic activity can be observed, such as hot springs and fumaroles. 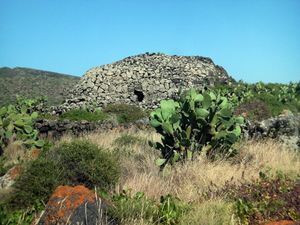 One of the "Sesi" on Pantelleria.

The original population of Pantelleria did not come from Sicily, and was of Iberian or Ibero-Ligurian stock. After a considerable interval, during which the island probably remained uninhabited, the Carthaginians took possession of it (no doubt owing to its importance as a station on the way to Sicily) probably around the beginning of the 7th century BC, occupying as their acropolis the twin hill of San Marco and Santa Teresa, 2 km (1.2 mi) south of the town of Pantelleria. The town has considerable remains of walls made of rectangular blocks of masonry, and also of a number of cisterns. Punic tombs have also been discovered, and the votive terra-cottas of a small sanctuary of the Punic period were found near the north coast.

The Romans occupied the island as the Fasti Triumphales record in 255 BC, lost it again the next year, and recovered it in 217 BC. Under the Empire it served as a place of banishment for prominent persons and members of the imperial family. The town enjoyed municipal rights.

In 700 the Arabs conquered the island and named it بنت الرياح Bint al-Riyāḥ 'the daughter of the winds', which represents the strong winds that arise off the north coast of Africa. In 1123 Roger of Sicily took the island, and in 1311 an Aragonese fleet, under the command of Lluís de Requesens, won a considerable victory here. Requesens's family became princes of Pantelleria until 1553, when the Turks captured the island. A naval battle took place close to the island in July 1586 when an armed English merchant fleet of five ships managed to repel an attack by eleven Spanish and Maltese galleys.

A Siculo-Arabic dialect similar to Maltese was the vernacular of the island until the late 18th century, when the Romance Sicilian superseded it. However, the modern Sicilian language in Pantelleria contains many Arabic loanwords and most of the island's place names are of Semitic origin.

Pantelleria's capture was regarded as crucial to Operation Husky, the Allied invasion of Sicily in 1943 as planes based on Pantelleria could readily reach Sicily. In Operation Corkscrew the Allies bombarded Pantelleria heavily from both air and sea in the days before the scheduled invasion; the garrison finally surrendered as the landing troops were approaching. Pantelleria then played a part as a vital base for Allied aircraft during the assault on Sicily. 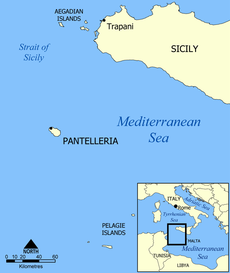 The island of Pantelleria is located above a drowned continental rift in the Strait of Sicily and has been the focus of intensive volcano-tectonic activity. The 15km-long (9.3 mi) island is the emergent summit of a largely submarine edifice.[1] Two large Pleistocene calderas dominate the island, the older of the two formed about 114,000 years ago and the younger Cinque Denti caldera formed about 45,000 years ago.[2] The eruption that formed the Cinque Denti caldera produced the distinctive Green Tuff deposit that covers much of the island, and is found across the Mediterranean, as far away as the island of Lesbos in the Aegean.[3] Holocene eruptions have constructed pumice cones, lava domes, and short, blocky lava flows.[4]

Post Green Tuff activity constructed the cone of Monte Gibele, part of which was subsequently uplifted to form Montagna Grande. Several vents are located on three sides of the uplifted Montagna Grande block on the southeast side of the island. A submarine eruption in 1891 from a vent off the northwest coast is the only confirmed historical activity.[5]

Currently the island is subsiding, and Montagna Grande is slowly sinking. This is thought to be caused by the magma beneath the volcano cooling and degassing.[6] There are also numerous hot springs and fumaroles on the island, due to an active hydrothermal system. Favara Grande, in the south east of the island, is one of the best examples. The island is also releasing a small amount of CO2 through passive degassing.[7]

The island is the type locality for peralkaline rhyolitic rocks, pantellerites.

The island is fertile, but lacks any fresh water. The principal town, with a population of about 3,000, is on the northwest, upon the only harbour (only fit for small steamers), which is fortified. There was also a penal colony here. 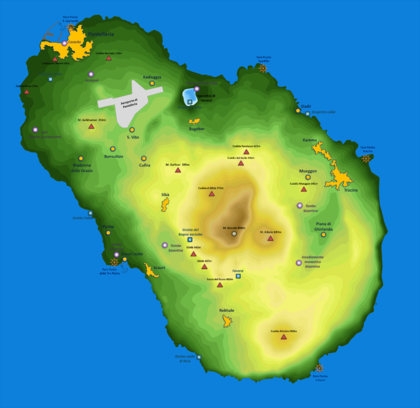 A wide nature reserve is present on the island, as well as a natural lake, called Specchio di Venere (Venus' mirror), that formed inside the remains of a former volcanic crater thanks to both rain and hot springs. The lake is 12 m (39 ft) deep and it is popular for swimming, hot springs, and mud bathing. Other natural attractions are represented by various access to the sea, a large network of trekking paths, other hot springs, and a very popular natural sauna consisting of vapours filtering through the rocks inside a little cave.

A Middle Bronze Age village was situated on the west coast, 3 km (1.9 mi) southeast of the harbour, with a rampart of small blocks of lava, about 7.5 m (25 ft) high, 10 m (33 ft) wide at the base and 5 m (16 ft) at the top, upon the undefended eastern side: within it remains of huts were found, with pottery, tools of obsidian, and other artifacts. The objects discovered are in the museum at Syracuse.

To the southeast, in the district known as the Cunelie, are a large number of tombs, known as sesi, similar in character to the nuraghe of Sardinia, though of smaller size, consisting of round or elliptical towers with sepulchral chambers in them, built of rough blocks of lava. Fifty-seven of them can still be traced. The largest is an ellipse of about 18 by 20 m (59 by 66 ft), but most of the sesi have a diameter of only 6 to 7 m (20 to 23 ft). The identical character of the pottery found in the sesi with that found in the prehistoric village proves that the former are the tombs of the inhabitants of the latter.

Monuments and other buildings

The island is scattered with typical local one level buildings called dammuso which have unknown but probably very remote origins. A dammuso is a dry stone building formed by thick walls that usually appear black due to the extensive use of volcanic rock, and characteristic domes on top painted in white to avoid overheating and that also serve as a collector of rain that is then directed towards a large tank usually situated below the building or the nearby soil in ordered to be stored for the dry season.

Most of the other constructions remained destroyed after heavy bombing during the Second World War, with the notable exception of a castle known as Barbacane, a severe renaissance building formed by an irregularly quadrangular plant with internal court joint to a squared base tower.

The island is served by Pantelleria Airport,[10] which is served by Alitalia throughout the year, connecting Trapani and Palermo, and various other companies in summer, connecting the island with main Italian cities such as Milan, Rome, Venice, and others. The island can be reached by ferries from Trapani, and lies close to the main route from east to west through the Mediterranean.