This article incorporates information from the equivalent article on the Deutsch Wikipedia. 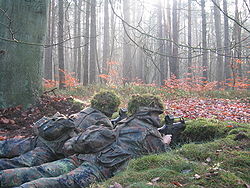 Panzergrenadiere of the Bundeswehr on out post (de: Alarmposten) during basic training.

Panzergrenadier (help·info) (short: PzGren or Pzg) is a German term for motorised or mechanized infantry – that is, infantry transported in combat vehicles specialized for such tasks – as introduced during World War II. It is used in the armies of Austria, Germany and Switzerland.

However, in the German Heer, Panzergrenadier is also the lowest rank of enlisted men (de: Mannschaften) in the Panzergrenadiertruppe, comparable to NATO OR-1.[1]

The term Panzergrenadier was not adopted until 1942. Infantry in panzer divisions from 1937 onwards were known as Schützen Regiments; they wore the same rose pink ﻿ piping on their uniforms as the tank crews (with an "S" cypher that distinguished the Schützen from the tank and anti-tank units that also wore that colour). Soldiers in special Motorized Infantry units wore the standard white piping of the Infantry. In 1942, when Infantry Regiments were renamed as Grenadier Regiments by Hitler as a historical homage to Frederick the Great's Army, the Schützen regiments (and the soldiers in them) began to be redesignated as Panzergrenadier regiments, as did Motorized Infantry units and soldiers. Their Waffenfarbe was also changed from either white (in the case of Motorized Infantry) or rose pink to a meadow-green shade previously worn by motorcycle troops. Some units did not change over their designations and/or waffenfarbe accoutrements until 1943, and many veteran Schützen ignored regulations and kept their rose-pink until the end of the war. 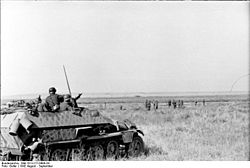 German panzergrenadiers in the Soviet Union, August 1942. The combat vehicle in view is the Sd.Kfz. 251 armoured half-track.

The Panzergrenadier divisions were organized as combined arms formations, usually with six battalions of truck-mounted infantry organized into either two or three regiments, a battalion of tanks, and an ordinary division's complement of artillery, reconnaissance units, combat engineers, anti-tank and anti-aircraft artillery, and so forth. All these support elements would also be mechanized in a PzGren. division, though most of the artillery, anti-tank, and anti-aircraft elements were equipped with weapons towed by trucks rather than the relatively rare armored and self-propelled models. In practice the PzGren. divisions were often equipped with heavy assault guns rather than tanks, due to a chronic shortage of tanks throughout the German armed forces. A few elite units, on the other hand, might have the tanks plus a battalion of heavy assault guns for their anti-tank element, and armored carriers for some of their infantry battalions as well.

On paper a Panzergrenadier division had one tank battalion less than a Panzer division, but two more infantry battalions, and thus was almost as strong as a Panzer division, especially on the defensive. Of 226 panzergrenadier battalions in the whole of the German Army, Luftwaffe and Waffen SS in September 1943, only 26 were equipped with armoured half tracks, or just over 11 percent. The rest were equipped with trucks.

The use of armoured half-tracks was rare in the German Army, and even the elite Großdeutschland Division, with two panzergrenadier regiments, only mustered a few companies' worth of the vehicles, generally SdKfz 251 troop carriers. The vast majority of Schützen/Panzergrenadier soldiers were mounted in trucks. Additionally, vehicles in the early war period suffered from poor off-road performance. 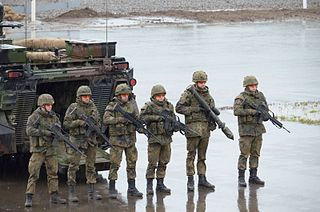 A Panzergrenadier squad (en: Armour grenadier) of the German Heer.

"Since the Bundeswehr, the new West German military, was to be employed solely in Europe under NATO command, German Ministry of Defense studies advocated that all twelve of the new army's divisions should be armored. [EN#23] This proposal derived in large measure from the German experience fighting the Red Army only a decade before; the concern of German military leaders still centered on countering a massive Soviet tank assault. [EN#24] However, NATO's U.S. representatives believed that the 'all-armored' plan would be difficult to support logistically, and a compromise 'balanced solution' of six armored and six motorized infantry divisions emerged.[3]

"With regard to German rearmament, the [U.S.] Joint Chiefs [JSPC 956/63, 4 October 1954] recommended retaining the force objective of the EDC [European Defense Community] proposal, which foresaw eight infantry and four armored divisions. The JCS supported a German proposal to mechanize two of the infantry divisions. This was thought suitable 'in view of the probable tactical employment of the German Army.' [EN#133]"[4]

"As early as February 1956, German generals suggested that NATO divisions should have a more flexible command structure. . . . German general officers assessed initial Bundeswehr divisions as too heavy, and they were concerned about the complexity of the command structure in a potential atomic war. German army leaders thus introduced a new divisional organization for 1959.[EN#88] The new division was built upon three self-contained tactical headquarters. Simultaneously, battalions were reduced in size to improve mobility and command and control. To compensate, infantry divisions received twelve rather than nine maneuver battalions. But there was also a fundamental shift in operational and structural thinking. In the old system, the division had been the essential combined-arms tactical unit. After the reorganization of 1958 and 1959, brigades of several maneuver battalions were to be the new self-contained combat formations capable of independent action.[EN#89] They were loosely attached to divisional headquarters, which functioned primarily as administrative units.[EN#90] Brigades could disperse more widely on the battlefield than regimental combat teams, which reduced vulnerability to atomic weapons while maintaining the combat power of the traditional division.[EN#91] Moreover, all infantry units were converted to armored infantry." [Panzergrenadiertruppe] [5] Note: All infantry battalions assigned to all Bundeswehr armored divisions were already mechanized as armored infantry.

In the German army, Panzergrenadiere act as mechanized infantry and escort of armored vehicles and tanks.

According to the German central army regulation HDv 100/100 (State of 2000), the Panzergrenadiertruppe and their co-operation with other armoured troops is characterized as following:

According to the HDv 231/100, the fighting of a Panzergrenadier-Battalion is characterized by the following aspects:

"The fighting of the battalion is characterized by:

After the newest phase of the transformation process German Army will be fielding the following active Panzergrenadier battalions:

Training and development of the Panzergrenadiertruppe is usually performed by the Armoured Corps Training Centre (Ausbildungszentrum Panzertruppen) in Munster, its commander holding the title of General der Panzertruppen. Some essential training courses, especially for urban warfare and fighting in forested terrain, are held at the Infanterieschule (Infantry School) at Hammelburg.

The two existing Panzergrenadier battalions of the Austrian Bundesheer use the Ulan armoured fighting vehicle.[8] 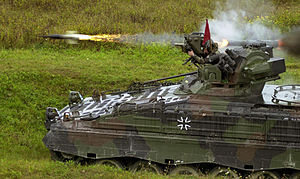 Until 2014 the main Infantry fighting vehicle of the German panzergrenadiers was the Marder IFV, it began to be replaced by the Puma IFV beginning in 2010.[9]

The G36 assault rifle is the standard weapon of German infantrymen and also used by Panzergrenadier units. To fight armored vehicles or other hard targets the Panzerfaust 3 rocket-propelled grenade and the MILAN Anti-tank guided missile are in use. The MILAN-ATGM is used by dismounted Panzergrenadier fireteams (which consist of six soldiers due to the number of soldiers carried by the Marder and Puma IFVs), as well as attached to the Marder turret to provide the IFV with enhanced anti-armour capabilities. In tandem with the replacement of the Marder by the Puma, the MILAN is similarly being replaced by the Spike-ATGM for mounted and dismounted use.

As part of the Future Soldier-program, the German Infanterist der Zukunft-program is also intended to be introduced into Panzergrenadier-units and is already deployed with German soldiers in Afghanistan. 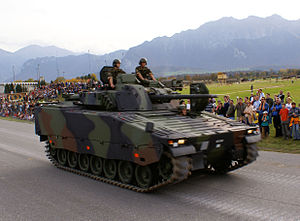 In 2000, the Swiss Army purchased 186 CV 90 infantry fighting vehicles from Hägglunds of Sweden.[10] They are in use with Panzergrenadier troops.