The Army's Basic Parachutist Badge is awarded to all military personnel of any service who complete the US Army Basic Airborne Course at Fort Benning, Georgia. It signifies that the soldier is a trained military parachutist, and is qualified to participate in airborne operations. The badge and its sew-on equivalent may be worn on the Army Combat Uniform (ACU).[2]

To be eligible for award of the basic Parachutist Badge, an individual must have completed the Basic Airborne Course of the Airborne School of the United States Army Infantry School at Fort Benning, Georgia. To graduate, a student must complete the three-phase course consisting of a ground phase, a tower phase, and a jump phase. By the end of the course, a student will have completed five jumps in varying jump configurations, from a "no load" jump all the way to a full combat load jump at night.[1]

To be eligible for the Senior Parachutist Badge, an individual must have been rated excellent in character and efficiency and have met the following requirements:

To be eligible for the Master Parachutist Badge, an individual must have been rated excellent in character and efficiency and have met the following requirements:

The 25 combat equipment jumps necessary to qualify for the Master Parachutist Badge must be from a static line.[1]

The master parachutist badge is 38mm in width at the widest part of the wings and 31mm from the top of the wreath to the bottom of the parachute where the risers meet in a point. 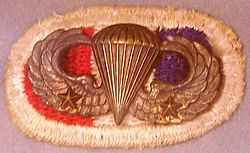 Soldiers assigned to Army units on airborne status wear a cloth oval background trimming underneath their Parachutist Badge,[4] which shares the basic design of the unit's beret flash.[5] This is one method by which an individual can identify a parachute qualified soldier serving in a unit on active jump status, called a "Paratrooper," versus a parachutist serving in a non-airborne unit. The original background trimming was also a contribution of William P. Yarborough.[4]

If a soldier completes an airborne jump into a combat zone, they are authorized to wear a Combat Jump Device on their Parachutist Badge. The device consists of a star or arrangements of stars, indicating the number of combat jumps.[6] The use of stars as Combat Jump Devices did not gain official approval until after the 1983 invasion of Grenada (Operation Urgent Fury). The stars are awarded as follows:[7][8]

Like the Army, the Air Force issues the same parachutist badges in the same three degrees (Basic, Senior, & Master) but have different criteria for the awarding of these badges. The level of degree is determined by the number of jumps the wearer has successfully completed, years of service in the Air Force, and other requirements as specified by AFI 11-402, Aviation and Parachutist Service, Aeronautical Ratings and Badges.[11]

The Air Force Basic Parachutist Badge is the same as the Army Basic Parachutist Badge. Air Force personnel may be awarded the decoration following completion of basic parachute training through a designated Air Force Air-Ground Training Program. Air Force personnel generally earn the basic parachutist badge either through the Army's Airborne School at Fort Benning, or USAFA cadets and USAF officers who graduated from USAFA through completion of the AM-490 freefall parachute training course taught by AETC's 98th Flying Training Squadron (98 FTS) at the U.S. Air Force Academy.[11]

The freefall program is offered to U.S. Air Force Academy cadets and, as a result, a large percentage of Air Force Academy graduates wear the Basic Parachutist Badge. The course is designed for USAFA cadets to develop character, confidence, and courage. The course, however, does not qualify a graduate for Department of Defense jump units. Air Force members interested in pursuing a job requiring jump status must attend the United States Army Airborne School.[13] [14]

The Air Force Senior Parachutist Insignia consists of the standard Air Force Parachutist with a star atop the parachute. Awarded for 30 static line jumps. Those 30 jumps must include: (1) Two jumps during the hours of darkness; (2) 15 jumps with operational equipment (prescribed by MAJCOM); (3) Two jumps with an operational unit that ended in an airborne assault or operational problem (real or training), or four test jumps with experimental equipment; (4) Actually perform one night jump as a Primary Jumpmaster (PJM); and (5) Seven jumps performing as PJM.[11]

The Air Force Master Parachutist Insignia consists of the Senior Air Force Parachutist with a star centered within the wreath. Awarded for 65 static line jumps. The 65 jumps must include (1) Four jumps during the hours of darkness; (2) 25 jumps with operational equipment as prescribed by the MAJCOM; (3) Five jumps with an operational unit culminating in an airborne assault or operational problem (real or training), or ten test jumps with experimental equipment; (4) Two night jumps performing PJM duties; and (5) 15 jumps performing as PJM.[11]

Training is accomplished by successful completion of the prescribed course of instruction while attending the:[18]

The right to wear the Basic Parachutist Insignia is based on the completion of prescribed training defined in MCO 3120.11.:[18]

When an enlisted member initially qualifies as a static line parachutist, an entry shall be made on NAVPERS 1070/613 (commonly referred to as a "Page 13" entry) of the service record indicating the date of qualification, type(s) of aircraft in which qualified, and unit at which the training was received. Enlisted members are authorized the parachutist (PJ) designator added to their rating.[18]

A qualified static-line parachute jumper who successfully completes the prescribed program of instruction while attending a formal, interservice training facility including a minimum of 10 military free-fall parachute jumps, at least 2 of which must have been conducted carrying full combat equipment (1 day/1 night), may qualify. Enlisted members are authorized the military free-fall parachutist (FPJ) designator added to their rating.[18]

When an officer initially qualifies as a static line parachutist, the additional qualification designator (AQD) of BT1 will be entered into the officer's record by their detailer (NAVPERS). Free-fall qualification will result in an AQD of BT2.[18]

For both Static Line and Military Free Fall Parachutist qualified personnel, a service record entry shall also indicate whether or not the member is HALO-qualified.[18]

The Basic Parachutist Badge is a prerequisite for the Special Warfare Badge since parachutist training is an integral part of the Navy’s Basic Underwater Demolition/SEAL (BUD/S) program. SEAL personnel generally do not wear the Basic badge once they earn their Special Warfare insignia, but will wear their Navy and Marine Corps Parachutist Badge in addition to the Special Warfare Badge, the latter nicknamed the "Budweiser" badge. Navy EOD technicians are generally also jump qualified with a number of them also being qualified in military free-fall (HALO/HAHO). Currently, due to a recent change, newly pinned Navy EOD technicians are required to attend the U.S. Army's Basic Airborne School upon graduation. As well, a small number of SWCC personnel earn Basic Parachutist badges in conjunction with their assignment to a Special Boat Team detachment that uses the Maritime Craft Air Delivery System (MCADS). This enables them to drop small watercraft and their crews from C-130 aircraft.[18]

The Navy and Marine Corps Parachutist Insignia (originally issued as Navy Parachute Rigger wings) is a gold-colored embroidered or metal insignia depicting an open parachute with outstretched wings. It is authorized for officers and enlisted personnel who were awarded the Basic Parachutist Insignia and, under competent orders, have completed a minimum of five additional static-line or P3 jumps, to include: (1) combat equipment day jump, two (2) combat equipment night jumps, and employ at least two (2) different types of military aircraft.[18]

In the latter half of WWII, graduates of the USN Parachute Rigger School were awarded this badge designed by the American insignia company (AMICO). During World War II members of the USMC 1st Parachute Battalion wore the same AMICO Parachute Rigger badge in the Pacific Theater because they liked the look of the wings on their uniform more than the officially approved 1 1/2-inch wide U. S. Army type Basic Parachutist badges made of silver.[19] [20]In 1963, Major Bruce F. Myers of the Marine Corps Test Unit requested that the Navy Parachute Rigger wings be issued as the Navy/Marine Corps parachutist badge and it was approved that same year by Chief of Naval Operations, Admiral George W. Anderson.[21]

While all Sailors and Marines can be awarded the Navy and Marine Corps Parachutist Badge the Force Recon Marines not yet qualified continue to wear the Army Basic Parachutist Insignia.