From Infogalactic: the planetary knowledge core
Jump to: navigation, search
For other uses, see Paradise (disambiguation). 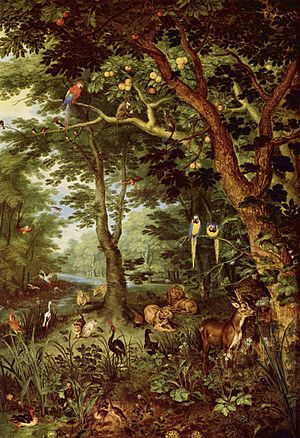 Paradise (Persian: پردیس, Paradise garden) is the term for a place of timeless harmony. The Abrahamic faiths associate paradise with the Garden of Eden, that is, the perfect state of the world prior to the fall from grace, and the perfect state that will be restored in the World to Come.

Paradisaical notions are cross-cultural, often laden with pastoral imagery, and may be cosmogonical or eschatological or both, often compared to the miseries of human civilization: in paradise there is only peace, prosperity, and happiness. Paradise is a place of contentment, a land of luxury and idleness. Paradise is often described as a "higher place", the holiest place, in contrast to this world, or underworlds such as Hell. In eschatological contexts, paradise is imagined as an abode of the virtuous dead. In Christian and Islamic understanding, Heaven is a paradisaical relief. In old Egyptian beliefs, the otherworld is Aaru, the reed-fields of ideal hunting and fishing grounds where the dead lived after judgment. For the Celts, it was the Fortunate Isle of Mag Mell. For the classical Greeks, the Elysian fields was a paradisaical land of plenty where the heroic and righteous dead hoped to spend eternity. The Vedic Indians held that the physical body was destroyed by fire but recreated and reunited in the Third Heaven in a state of bliss. In the Zoroastrian Avesta, the "Best Existence" and the "House of Song" are places of the righteous dead. On the other hand, in cosmological contexts 'paradise' describes the world before it was tainted by evil.

The concept is a topos in art and literature, particularly of the pre-Enlightenment era, a well-known representative of which is John Milton's Paradise Lost. 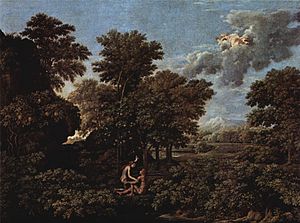 The word "paradise" entered English from the French paradis, inherited from the Latin paradisus, from Greek parádeisos (παράδεισος), from an Old Iranian *paridayda- "walled enclosure". By the 6th/5th century BCE, the Old Iranian word had been adopted as Assyrian pardesu "domain". It subsequently came to indicate walled estates, especially the carefully tended royal parks and menageries. The term eventually appeared in Greek as parádeisos "park for animals" in the Anabasis of the early 4th century BCE Athenian Xenophon. Aramaic pardaysa similarly reflects "royal park".

Hebrew פרדס (pardes) appears thrice in the Tanakh; in the Song of Solomon 4:13, Ecclesiastes 2:5 and Nehemiah 2:8. In those contexts it could be interpreted as an "orchard" or a "fruit garden". In the Septuagint (3rd–1st centuries BCE), Greek παράδεισος parádeisos was used to translate both Hebrew pardes and Hebrew gan, "garden": it is from this usage that the use of "paradise" to refer to the Garden of Eden derives. The same usage also appears in Arabic and in the Quran as firdaws فردوس.

The word's etymology is ultimately derived from a PIE root *dheigʷ "to stick and set up".[1] It is reflected in Avestan as pairi-daêza-.[2][3] The literal meaning of this Eastern Old Iranian language word is "walled (enclosure)",[2] from pairi- "around" and -diz "to make, form (a wall), build".[4][5] The word is not attested in other Old Iranian languages (these may however be hypothetically reconstructed, for example as Old Persian *paridayda-). The idea of a walled enclosure was not preserved in most Iranian usage, and generally came to refer to a plantation or other cultivated area, not necessarily walled. For example, the Old Iranian word survives in New Persian pālīz (or "jālīz"), which denotes a vegetable patch.

The word pardes, borrowed from the Old Persian word, does not appear before the post-Exilic period (post-538 BCE); it occurs in the Song of Songs 4:13, Ecclesiastes 2:5, and Nehemiah 2:8, in each case meaning "park" or "garden", the original Persian meaning of the word, where it describes to the royal parks of Cyrus the Great by Xenophon in Anabasis.

Later in Second Temple era Judaism "paradise" came to be associated with the Garden of Eden and prophesies of restoration of Eden, and transferred to heaven. The Septuagint uses the word around 30 times, both of Eden, (Gen.2:7 etc.) and of Eden restored (Ezek. 28:13, 36:35 etc.). In the Apocalypse of Moses, Adam and Eve are expelled from paradise (instead of Eden) after having been tricked by the serpent. Later after the death of Adam, the Archangel Michael carries the body of Adam to be buried in Paradise, which is in the Third Heaven.

In Rabbinical Judaism, the word 'Pardes' recurs, but less often in the Second Temple context of Eden or restored Eden. A well-known reference is in the Pardes story, where the word may allude to mystic philosophy.[6]

The Zohar gives the word a mystical interpretation, and associates it with the four kinds of Biblical exegesis: peshat (literal meaning), remez (allusion), derash (anagogical), and sod (mystic). The initial letters of those four words then form פַּרְדֵּס – p(a)rd(e)s, which was in turn felt to represent the fourfold interpretation of the Torah (in which sod – the mystical interpretation – ranks highest).

See also: World to Come and Kingship and kingdom of God 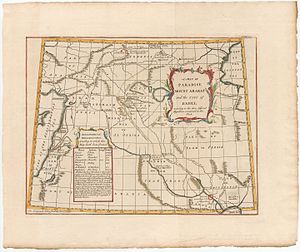 In the 2nd century AD, Irenaeus distinguished paradise from heaven. In Against Heresies, he wrote that only those deemed worthy would inherit a home in heaven, while others would enjoy paradise, and the rest live in the restored Jerusalem (which was mostly a ruin after the Jewish–Roman wars but was rebuilt beginning with Constantine the Great in the 4th century). Origen likewise distinguished paradise from heaven, describing paradise as the earthly "school" for souls of the righteous dead, preparing them for their ascent through the celestial spheres to heaven.[7]

Many early Christians identified Abraham's bosom with paradise, where the souls of the righteous go until the resurrection, others were inconstant in their identification of paradise, such as St. Augustine whose views varied.[8]

In Christian art Fra Angelico's Last Judgement painting shows Paradise on its left side. There is a tree of life (and another tree) and a circle dance of liberated souls. In the middle is a hole. In Muslim art it similarly indicates the presence of the Prophet or divine beings. It visually says, "Those here cannot be depicted."

Slavic languages, and Romanian which is not Slavic but Slavic-influenced, have a distinct term for "paradise", "raj" (read "rai") which is generally agreed to derive from Persian[citation needed] ray and co-exists alongside terms deriving from the Persian word pardeis.

Jehovah's Witnesses believe, from their interpretation of the Book of Genesis, that God's original purpose was, and is, to have the earth filled with the offspring of Adam and Eve as caretakers of a global paradise. However, Adam and Eve rebelled against God's sovereignty and were banished from the Garden of Eden, driven out of paradise into toil and misery.

Jehovah's Witnesses believe that disobedient and wicked people will be destroyed by Christ at Armageddon and those obedient to Christ will live eternally in a restored earthly paradise. Joining the survivors will be the resurrected righteous and unrighteous people who died prior to Armageddon. The latter are brought back because they paid for their sins by their death and/or because they lacked opportunity to learn of Jehovah's requirements before dying. These will be judged on the basis of their post-resurrection obedience to instructions revealed in new "scrolls". They believe that resurrection of the dead to paradise earth is made possible by Christ's blood and the ransom sacrifice. This provision does not apply to those whom Christ as Judge deems to have sinned against God's holy spirit.[11][12]

In Latter Day Saint theology, paradise usually refers to the spirit world, the place where spirits dwell following death and awaiting the resurrection. In that context, "paradise" is the state of the righteous after death.[15] In contrast, the wicked and those who have not yet learned the gospel of Jesus Christ await the resurrection in spirit prison. After the universal resurrection, all persons will be assigned to a particular kingdom or degree of glory. This may also be termed "paradise".

In the Qur'an, Paradise is denoted as jannah (garden), with the highest level being called firdaus. The etymologically equivalent word is derived from the original Avestan counterpart, and used instead of Heaven to describe the ultimate pleasurable place after death, accessible by those who pray, donate to charity, read the Qur'an, believe in: God, the angels, his revealed books, his prophets and messengers, the Day of Judgement and the afterlife, and follow God's will in their life. Heaven in Islam is used to describe the Universe. It is also used in the Qur'an to describe skies in the literal sense, i.e., above earth. In Islam, the bounties and beauty of Heaven are immense, so much so that they are beyond the abilities of mankind’s worldly mind to comprehend.

The Urantia Book portrays Paradise as the "eternal center of the universe of universes," and as "the abiding place of the Universal Father, the Eternal Son, the Infinite Spirit, and their divine co-ordinates and associates." The book states that paradise is the primal origin and the final destiny for all spirit personalities, and for all the ascending creatures of the evolutionary worlds of time and space.[16]