Parents' Day is a holiday combining the concepts of a Fathers' Day and Mothers' Day.

The United Nations proclaimed June 1 to be the Global Day of Parents "to appreciate all parents in all parts of the world for their selfless commitment to children and their lifelong sacrifice towards nurturing this relationship".[1] It is the same day as International Children's Day.

In the United States, Parents' Day is held on the fourth Sunday of July. This was established in 1994 when President Bill Clinton signed a Congressional Resolution into law (36 U.S.C. § 135) for "recognizing, uplifting, and supporting the role of parents in the rearing of children." The bill was introduced by Republican Senator Trent Lott. It was supported by members of the Unification Church which also celebrates a holiday called Parents' Day, although on a different date.[2][3] Parents' Day is celebrated throughout the United States.[4] 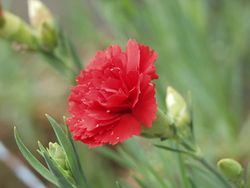 Dianthus caryophyllus, commonly known as carnations, flowers that symbolize Parents' Day and are given to parents by children in celebrating Parents' Day in South Korea

In South Korea, Parent's Day is annually held on May 8th. Parent's Day is celebrated by both the public and the government. Family events focus on the parents; popular actions include giving parents carnations. Public events are led by the Ministry of Health and Welfare and include public celebrations and awards.[5]

The origins of Parent's Day can be traced back to the 1930s. Starting in 1930, some Christian communities began to celebrate Mother's Day or Parents' Day. This tradition was combined with Korea's traditional Confucianism culture to eventually establish Mother's Day.[5] In 1956, the State Council of South Korea designated May 8th as an annual Mother's Day.[6] However, the question of Father's Day was discussed[7] and on March 30th, 1973, May 8th was designated as Parents' Day under Presidential Decree 6615, or the Regulations Concerning Various Holidays (각종 기념일 등에 관한 규정).[6] When Parents' Day was first established, the entire week with the 8th day was designated to be a week to respect the elderly, but this was abolished in 1997 with October becoming the month designated for respecting the elderly.[5]