From Infogalactic: the planetary knowledge core
Jump to: navigation, search
For the optimal allocation of resources, see Pareto efficiency. 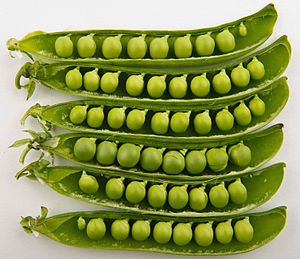 The Pareto Principle is derived from Vilfredo Pareto's observation that only a "vital few" of the peapods in his garden produced the majority of peas.

The Pareto principle (also known as the 80/20 rule, the law of the vital few, or the principle of factor sparsity)[1] states that, for many events, roughly 80% of the effects come from 20% of the causes.[2] Management consultant Joseph M. Juran suggested the principle and named it after Italian economist Vilfredo Pareto, who noted the 80/20 connection while at the University of Lausanne in 1896, as published in his first paper, "Cours d'économie politique". Essentially, Pareto showed that approximately 80% of the land in Italy was owned by 20% of the population; Pareto developed the principle by observing that about 20% of the peapods in his garden contained 80% of the peas.[3]

It is a common rule of thumb in business; e.g., "80% of your sales come from 20% of your clients." Mathematically, the 80/20 rule is roughly followed by a power law distribution (also known as a Pareto distribution) for a particular set of parameters, and many natural phenomena have been shown empirically to exhibit such a distribution.[4]

The Pareto principle is only tangentially related to Pareto efficiency. Pareto developed both concepts in the context of the distribution of income and wealth among the population.

The original observation was in connection with population and wealth. Pareto noticed that 80% of Italy's land was owned by 20% of the population.[5] He then carried out surveys on a variety of other countries and found to his surprise that a similar distribution applied.

A chart that gave the inequality a very visible and comprehensible form, the so-called 'champagne glass' effect,[6] was contained in the 1992 United Nations Development Program Report, which showed that distribution of global income is very uneven, with the richest 20% of the world's population controlling 82.7% of the world's income.[7]

The more predictions a theory makes, the greater the chance is of some of them being cheaply testable. Modifications of existing theories make many fewer new unique predictions, increasing the risk that the few predictions remaining will be very expensive to test.[9]

In computer science and engineering control theory, such as for electromechanical energy converters, the Pareto principle can be applied to optimization efforts.[10]

For example, Microsoft noted that by fixing the top 20% of the most-reported bugs, 80% of the related errors and crashes in a given system would be eliminated.[11]

In load testing, it is common practice to estimate that 80% of the traffic occurs during 20% of the time period.[citation needed]

It is said that about 20% of sportsmen participate in 80% of big competitions and out of them, 20% win 80% of the awards. This could also be applied to teams in many popular games.

The Pareto principle has also been applied to training, where roughly 20% of the exercises and habits have 80% of the impact and the trainee should not focus so much on a varied training.[14] This does not necessarily mean eating heartily or going to the gym are not important, just that they are not as significant as the key activities.

The law of the few can be also seen in betting, where it is said that with 20% effort you can match the accuracy of 80% of the bettors.[15]

Aside from ensuring efficient accident prevention practices, the Pareto principle also ensures hazards are addressed in an economical order as the technique ensures the resources used are best used to prevent the most accidents.[17]

In the systems science discipline, Epstein and Axtell created an agent-based simulation model called SugarScape, from a decentralized modeling approach, based on individual behavior rules defined for each agent in the economy. Wealth distribution and Pareto's 80/20 principle became emergent in their results, which suggests the principle is a collective consequence of these individual rules.[18]

The Pareto principle has many applications in quality control.[citation needed] It is the basis for the Pareto chart, one of the key tools used in total quality control and Six Sigma techniques. The Pareto principle serves as a baseline for ABC-analysis and XYZ-analysis, widely used in logistics and procurement for the purpose of optimizing stock of goods, as well as costs of keeping and replenishing that stock.[19]

The Pareto principle was also mentioned in the book 24/8 - The Secret for being Mega-Effective by Achieving More in Less Time by Amit Offir. Offir claims that if you want to function as a one-stop shop, focus on the 20% of a project that is important and that you save a lot of time and energy.

In health care in the United States, 20% of patients have been found to use 80% of health care resources.[20]

The Dunedin Study has found 80% of crimes are committed by 20% of criminals.[21] This statistic is used to support both stop-and-frisk policies and broken windows policing, as catching those criminals committing minor crimes will likely net many criminals wanted for (or who would normally commit) larger ones.

The idea has a rule of thumb application in many places, but it is commonly misused. For example, it is a misuse to state a solution to a problem "fits the 80/20 rule" just because it fits 80% of the cases; it must also be that the solution requires only 20% of the resources that would be needed to solve all cases. Additionally, it is a misuse of the 80/20 rule to interpret data with a small number of categories or observations.

This is a special case of the wider phenomenon of Pareto distributions. If the Pareto index α, which is one of the parameters characterizing a Pareto distribution, is chosen as α = log45 ≈ 1.16, then one has 80% of effects coming from 20% of causes.

The term 80/20 is only a shorthand for the general principle at work. In individual cases, the distribution could just as well be, say, nearer to 80/10 or 80/30. There is no need for the two numbers to add up to the number 100, as they are measures of different things, e.g., 'number of customers' vs 'amount spent'). However, each case in which they do not add up to 100%, is equivalent to one in which they do. For example, as noted above, the "64/4 law" (in which the two numbers do not add up to 100%) is equivalent to the "80/20 law" (in which they do add up to 100%). Thus, specifying two percentages independently does not lead to a broader class of distributions than what one gets by specifying the larger one and letting the smaller one be its complement relative to 100%. Thus, there is only one degree of freedom in the choice of that parameter.

The Pareto principle is an illustration of a "power law" relationship, which also occurs in phenomena such as brush fires and earthquakes.[22] Because it is self-similar over a wide range of magnitudes, it produces outcomes completely different from Gaussian distribution phenomena. This fact explains the frequent breakdowns of sophisticated financial instruments, which are modeled on the assumption that a Gaussian relationship is appropriate to, for example, stock price movements.[23]

The Theil index is an entropy measure used to quantify inequalities. The measure is 0 for 50:50 distributions and reaches 1 at a Pareto distribution of 82:18. Higher inequalities yield Theil indices above 1.[24]