The Paris Agreement (French: L'accord de Paris) is an agreement within the framework of the United Nations Framework Convention on Climate Change (UNFCCC) dealing with greenhouse gases emissions mitigation, adaptation and finance starting in the year 2020. An agreement on the language of the treaty was negotiated by representatives of 195 countries at the 21st Conference of the Parties of the UNFCCC in Paris and adopted by consensus on 12 December 2015. It was opened for signature on 22 April 2016 (Earth Day),[2] and 177 UNFCCC members signed the treaty, 15 of which ratified it. It has not entered into force.[3][4]

The head of the Paris Conference, France's foreign minister Laurent Fabius, said this "ambitious and balanced" plan is a "historic turning point" in the goal of reducing global warming.[5]

The aim of the convention is described in Article 2, "enhancing the implementation" of the UNFCCC through:[6]

"(a) Holding the increase in the global average temperature to well below 2 °C above pre-industrial levels and to pursue efforts to limit the temperature increase to 1.5 °C above pre-industrial levels, recognizing that this would significantly reduce the risks and impacts of climate change;
(b) Increasing the ability to adapt to the adverse impacts of climate change and foster climate resilience and low greenhouse gas emissions development, in a manner that does not threaten food production;
(c) Making finance flows consistent with a pathway towards low greenhouse gas emissions and climate-resilient development."

Nationally determined contributions and their limits

The level of NDCs set by each country[10] will set that country's targets. However the 'contributions' themselves are not binding as a matter of international law, as they lack the specificity, normative character, or obligatory language necessary to create binding norms.[11] Furthermore, there will be no mechanism to force[12] a country to set a target in their NDC by a specific date and no enforcement if a set target in an NDC is not met.[10][13] There will be only a "name and shame" system[14] or as János Pásztor, the U.N. assistant secretary-general on climate change, told CBS News (US), a "name and encourage" plan.[15]

The negotiators of the Agreement however stated that the NDCs and the 2°C reduction target were insufficient, instead, a 1.5°C target is required, noting "with concern that the estimated aggregate greenhouse gas emission levels in 2025 and 2030 resulting from the intended nationally determined contributions do not fall within least-cost 2 ̊C scenarios but rather lead to a projected level of 55 gigatonnes in 2030", and recognizing furthermore "that much greater emission reduction efforts will be required in order to hold the increase in the global average temperature to below 2 ̊C by reducing emissions to 40 gigatonnes or to 1.5 ̊C".[16]

The implementation of the agreement by all member countries together will be evaluated every 5 years, with the first evaluation in 2023. The outcome is to be used as input for new nationally determined contributions of member states.[17] The stocktake will not be of contributions/achievements of individual countries but a collective analysis of what has been achieved and what more needs to be done.

The Paris Agreement has a 'bottom up' structure in contrast to most international environmental law treaties which are 'top down', characterised by standards and targets set internationally, for states to implement.[18]

Within the United Nations Framework Convention on Climate Change, legal instruments may be adopted to reach the goals of the convention. For the period from 2008 to 2012, greenhouse gas reduction measures were agreed in the Kyoto Protocol in 1997. The scope of the protocol was extended until 2020 with the Doha Amendment to that protocol in 2012.[19]

During the 2011 United Nations Climate Change Conference, the Durban Platform (and the Ad Hoc Working Group on the Durban Platform for Enhanced Action) was established with the aim to negotiate a legal instrument governing climate change mitigation measures from 2020. The resulting agreement was to be adopted in 2015.[20]

At the conclusion of COP 21, on 12 December 2015, the final wording of the Paris Agreement was adopted by consensus by all of the 195 UNFCCC participating member states and the European Union[3] to reduce emissions as part of the method for reducing greenhouse gas. In the 12 page Agreement,[21] the members promised to reduce their carbon output "as soon as possible" and to do their best to keep global warming "to well below 2 degrees C" [3.6 degrees F].[22]

Signature and entry into force 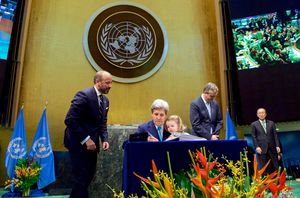 The Paris Agreement is open for signature by States and regional economic integration organizations that are Parties to the UNFCCC (the Convention) from 22 April 2016 to 21 April 2017 at the UN Headquarters in New York.[23]

It will enter into force (and thus become fully effective) only if 55 countries that produce at least 55% of the world's greenhouse gas emissions (according to a list produced in 2015)[24] ratify, accept, approve or accede to the agreement.[25][26] On 1 April 2016 the United States and China, which jointly represent almost 40% of global emissions, issued a joint statement confirming that both countries will sign the Paris Climate Agreement.[27][28] 175 Parties (174 states and the European Union) signed the treaty on the first date it was open for signature.[2][29]

Not part of the Paris agreement (and not legally binding)[31] is a (non-binding) plan to provide $100 billion a year in aid to developing countries for implementing new procedures to minimize climate change with additional amounts to be provided in subsequent years.[32]

Al Gore stated that "no agreement is perfect, and this one must be strengthened over time, but groups across every sector of society will now begin to reduce dangerous carbon pollution through the framework of this agreement."[35]

Although the agreement was lauded by many, including French President Francois Hollande and UN Secretary General Ban Ki-moon,[26] criticism has also surfaced. For example, Professor James Hansen, a former NASA scientist and a climate change expert, voiced anger about the fact that most of the agreement consists of "promises" or aims and not firm commitments.[36]

Institutional asset owners associations and think-tanks such as the World Pensions Council (WPC) have also observed that the stated objectives of the Paris Agreement are implicitly “predicated upon an assumption – that member states of the United Nations, including high polluters such as China, the US, India, Brazil, Canada, Russia, Indonesia and Australia, which generate more than half the world’s greenhouse gas emissions, will somehow drive down their carbon pollution voluntarily and assiduously without any binding enforcement mechanism to measure and control CO2 emissions at any level from factory to state, and without any specific penalty gradation or fiscal pressure (for example a carbon tax) to discourage bad behaviour. A shining example of what Roman lawyers called circular logic: an agreement (or argument) presupposing in advance what it wants to achieve.” [37]