A parish register in an English ecclesiastical parish is a handwritten volume, normally kept in the parish church in which details of baptisms, marriages and burials within the parish are recorded. The contemporary register is normally kept locally, whilst older volumes are usually deposited within a county record office or alternative archive repository.

In 1497, Cardinal Ximenes introduced a register of baptisms, first in Toledo, then throughout western Europe. In 1563 the Roman Catholic Church ordered the general keeping of baptismal and marriage registers.

On 5 September 1538, following the split with Rome, Thomas Cromwell, Henry VIII's Vicar General, ordered that each parish priest must keep a book, and that the Parson, in the presence of the wardens, must enter all the baptisms, marriages and burials of the previous week. The book was to be kept in a "sure coffer" with two locks (one key for the vicar, the other for the wardens). A fine of 3s 4d was to be levied for failure to comply. Many parishes ignored this order, believing it to be the forerunner of some new tax.

The order was repeated in 1547 with the stipulation that the fine was to go to the relief of the poor. 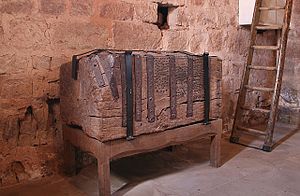 The Parish Chest in St. Mary's Church, Kempley. The registers would have been stored here.

From 1598, records were to be kept in 'great decent books of parchment' and copies or 'Bishop's Transcripts' of new entries were to be sent each month to the diocesan centre. Previous records (especially from the first year of Her Majesty's reign (1558)), often on scraps of paper, had to be copied into the new books, but many had deteriorated and were unreadable. The costs of the new books were to be met by charging for entries; this was opposed by many parishes and the act was not enforced until 1603. Finance was to be born by the Parish, and the books were to be kept in a chest with three locks. The week's entries were to be read out each Sunday after evensong.

During the English Civil War (1643–1647) and in the following Commonwealth period, records were poorly kept and many are now missing after being destroyed or hidden by the clergy. During 1653–1660 the registering of births, marriages and deaths was taken over by civil officers (confusingly called Parish Registers), but the registers were returned to the churches following the Restoration in 1660.

In order to encourage the wool trade, an act was passed in 1678 making it compulsory for all corpses to be buried in a shroud made of wool, an affidavit having to be made (and recorded in the register) that this had been done.

In 1711, it was ordered that the pages of registers were to be ruled and numbered (generally ignored) and in 1733 entries had to be made in English rather than Latin.

In 1754, Lord Hardwicke's Marriage Act came into being. A separate Marriage Register was to be kept (later with pre-printed forms), and Banns were enforced and Clandestine Marriages made illegal.

In 1763, the minimum age for marriage was fixed at 16 (earlier only with a Licence from the Bishop) and parental consent was needed for anyone under 21. A stamp duty of 3d was imposed on entries from 1783 to 1794 but paupers were exempt.

In 1812, an "Act for the better regulating and preserving Parish and other Registers of Birth, Baptisms, Marriages, and Burials, in England" (Rose's Act[1][2]) was passed. It stated that "amending the Manner and Form of keeping and of preserving Registers of Baptisms, Marriages, and Burials of His Majesty's Subjects in the several Parishes and Places in England, will greatly facilitate the Proof of Pedigrees of Persons claiming to be entitled to Real or Personal Estates, and otherwise of great public Benefit and Advantage". Separate, printed registers were to be supplied by the King's Printer, and used for baptisms, marriages and burials. These are more or less unchanged to this day.

In 1853, the Cemetery Act allowed for civic cemeteries, many churchyards being full to overflowing.

In the United States, at least the parishes in the Roman Catholic dioceses maintained a similar practice of recording baptisms, marriages, burials, and often also confirmations and first communions. From the earliest pioneer churches ministered by itinerant priests, the records were written in ecclesiastical Latin.[3] But after the Second Vatican Council and its reforms that included translating the Mass into local languages, most register entries gradually came to be written in English. In Protestant communions with stronger similarities to Roman Catholicism, parish registers are also important sources that document baptisms, marriages, and funerals. In Protestant and Evangelical churches, individual ministers often kept records of faith-related events among the congregation, but under much less guidance from any central governing body.

The parish register became mandatory in Italy for baptisms and marriages in 1563 after the Council of Trent and in 1614 for burials when its rules of compilation were as well normalised by the Church. Prior to 1563, the oldest registers of baptisms are preserved since 1379 in Gemona del Friuli, 1381 in Siena, 1428 in Florence or 1459 in Bologna.

The parish register became mandatory in France for baptisms with the Ordinance of Villers-Cotterêts signed into law by Francis I of France on August 10, 1539, then for marriages and burials with the Ordinance of Blois in 1579. They had to be sent every year to the bailiwick or sénéchaussée in the south of France. In April 1667, the Ordinance of Saint-Germain-en-Laye ordered a copy to be kept by the parish clergy as before the ordinance. Prior to 1539, the oldest registers are preserved since 1303 in Givry, 1451 in Roz-Landrieux, 1454 in Paramé, 1467 in Lanloup, 1479 in Trans-la-Forêt or 1500 in Signes. In 1691, some court clerks, the greffiers de l’état civil, were created in the bailiwicks and with the royal declaration of April 9, 1736, the double preservation of the registers was definitely enforced. By decree of the National Assembly of September 20, 1792, the keeping of the civil registers was given to the mayors and the old parish registers went then to the publics records of the archives communales and the old bailiwick registers to the archives departementales created in 1796. But from 1795, the parish again kept some private registers, like the registres de catholicité for the Catholic Church which are made in duplicate, one for the parish and one for the diocesan archives.

The contents have changed over time, not being standardised in England until the Acts of 1753 and 1812. The following are among what you can expect to find in later registers, though in the earlier ones it is quite common to find only names recorded. Early entries will be in some form of Latin, often abbreviated.

Dade and Barrington Registers are detailed registers that contain more information than standard contemporary baptism and burial registers. They usually commence in the late eighteenth century, but come to an end in 1812, when they were superseded by the requirements of George Rose’s 1812 Act, which required more information to be recorded than in normal registers, but actually required less information to be recorded than in Dade and Barrington Registers. There are examples of a few parishes continuing to keep Dade or Barrington Registers after 1813. In some cases, two registers were kept, for example in the Co Durham parish of Whickham both Barrington and Rose Registers were kept for the period 1813-1819, after which the former were discontinued.

William Dade, a Yorkshire clergyman of the 18th century, was ahead of his time, in seeing the value of including as much information on individuals in the parish register as possible. In 1777 Archbishop William Markham decided that Dade's scheme of registration forms should be introduced throughout his diocese. The resulting registers, and some that are related, are now known as "Dade registers".[4] The baptismal registers were to include child's name, seniority (e.g. first son), father's name, profession, place of abode and descent (i.e. names, professions and places of abode of the father's parents), similar information about the mother, and mother's parents, the infant's date of birth and baptism. Registers of this period are a gold-mine for genealogists, but the scheme was so much work for the parish priests that it did not last long.

In 1770 Dade wrote in the parish register of St. Helen's, York: "This scheme if properly put in execution will afford much clearer intelligence to the researches of posterity than the imperfect method hitherto generally pursued." His influence spread and the term Dade register has come to describe any parish registers that include more detail than expected for the time.

The application of this system was somewhat haphazard and many clergymen, particularly in more populated areas, resented the extra work involved in making these lengthy entries. The thought of duplicating them for the Bishop’s Transcripts put many of them off and some refused to follow the new rules. Several letters of complaint were printed in the York newspapers of the time, and the scheme suffered when the Archbishop indicated there was no punishment for vicars who failed to comply.

The Borthwick Institute for Archives recommends that researchers looking at Yorkshire parishes between 1770 and 1812 should check both sources.

From about 1783, as Lord Bishop of Salisbury, the Rt Rev. Shute Barrington instigated a similar system somewhat simpler than Dade's, and followed this in Northumberland and Durham from 1798, when he was translated to the diocese of Durham.

Most registers have been deposited in diocesan archives or county record offices. Where these have been filmed, copies are available to scan from The Church of Jesus Christ of Latter-day Saints through the Family History Library. Microfiche copies of parish registers, along with transcriptions, are usually available at larger local libraries and county record offices.

Since Victorian times, amateur genealogists have transcribed and indexed parish registers. Some societies have also produced printed transcripts and indexes — notably the Parish Register Society, the Harleian Society and Phillimore & Co. The Society of Genealogists, in London, has a very large selection of such transcripts and indexes. The LDS Library in Salt Lake City also has a vast collection of films of original registers.

The LDS, for its own purposes, has also produced an index (the IGI), of very many register entries — mostly baptisms and marriages. The IGI is available as a searchable database on the World Wide Web at [1] and on microform matter at local "Family History Centers". Like all transcripts and indexes, the IGI should be used with caution, as errors can occur in legibility of the original or microfilm of the original, in reading the original handwriting, and in entering the material to the transcription. "Batch entries" are generally more reliable than "individual submissions."[citation needed]