Parkersburg is a city in and the county seat of Wood County, West Virginia, United States.[5] Located at the confluence of the Ohio and Little Kanawha rivers, it is the state's fourth-largest city and the largest city in the Parkersburg–Marietta–Vienna Metropolitan Statistical Area. The population was 31,492 at the 2010 census. Its peak of population was more than 44,000 in 1960. The city is about 14 miles south of Marietta, Ohio.

The Baltimore and Ohio Railroad reached Parkersburg in 1857, but lacked a crossing over the Ohio River until after the American Civil War. When the B&O completed the Parkersburg Bridge (CSX) 1868-1870 to Belpre, it was the longest railroad bridge in the world.

The Bureau of the Public Debt, an agency of the U.S. Treasury Department, was relocated from the Washington, D.C. metropolitan area in the late 20th century and headquartered in Parkersburg. In October 2012, it was merged with the Financial Management Service to form the Bureau of the Fiscal Service.

White settlers originally named the city Newport when they settled it in the late 18th century following the American Revolutionary War. This was part of a westward migration of settlers from parts of Virginia to the east, closer to the Atlantic Ocean. A town section was laid out on land granted to Alexander Parker for his Revolutionary War service. Virginia made grants of land to veterans for their war service. The title conflicts between Parker and the city planners of Newport were settled in 1809 in favor of his heirs. The town was renamed Parkersburg in 1810. It was chartered by the Virginia General Assembly in 1820. It was rechartered as a city in 1860.

The town was the western terminus of both the Staunton-Parkersburg Turnpike and the Northwestern Turnpike. In 1857 the Baltimore and Ohio Railroad built a branch line south to the town from Wheeling, West Virginia. Travelers wanting to connect with the Ohio Marietta and Cincinnati Railroad, one of the east-west lines along the Ohio River, had to take a steamboat 14 miles north to Marietta, Ohio.

Jacob Linville designed the railroad bridge planned by the B&O. It was constructed in 1868–1870 between Parkersburg and Belpre, Ohio, as part of the B&O's main line from Baltimore to St. Louis, Missouri.[6] This drew traffic and trade from Marietta. Today the structure is known as the Parkersburg Bridge (CSX).

Blennerhassett Island is a historical site located in Parkersburg.

The climate in this area is characterized by hot, humid summers and cold winters and evenly distributed precipitation throughout the year. According to the Köppen Climate Classification system, Parkersburg has a Humid continental climate, abbreviated "Dfa" on climate maps.[9]

There were 13,807 households of which 27.0% had children under the age of 18 living with them, 39.1% were married couples living together, 14.3% had a female householder with no husband present, 5.1% had a male householder with no wife present, and 41.4% were non-families. 35.0% of all households were made up of individuals and 14.3% had someone living alone who was 65 years of age or older. The average household size was 2.24 and the average family size was 2.86. 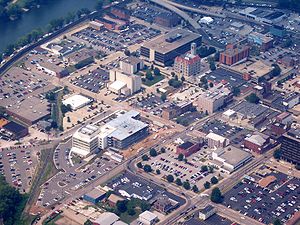 An aerial view of downtown Parkersburg in 2005. 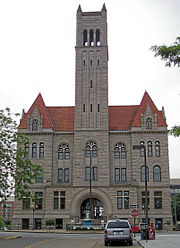 Several museums are located in Parkersburg, including The Blennerhassett Museum of Regional History,[19] the Henry Cooper House, the Oil and Gas Museum,[20] the Sumnerite African-American History Museum, The Artcraft Studio and the Veterans Museum of Mid-Ohio Valley.[21]

The Wood County Ravens, a semi-professional football team, is based in the city. The Ravens are a part of the Mountain State Football League.[22][23]

Parkersburg was home to the Ohio Valley Redcoats, a minor league baseball team, until 1998. The city is in negotiations to bring professional baseball back to Parkersburg.[24]

In 2008, the city and its three high schools placed second in ESPN's TitleTown USA competition.[25]

"We don't have a lot of people, nor any professional sports teams, but here is a stat for you. AAA is the highest level that a high school can compete at in W.Va. Both schools mentioned hereafter are AAA schools. In Parkersburg, we have accumulated 192 overall state championships in 103 years with 183 if those coming since 1950. Parkersburg High School alone has 137 championships in its 103 years of existence. There is also another AAA school in Parkersburg called Parkersburg South High School, who, by the way, has 38 titles in 40 years. Not to be outdone Parkersburg Catholic, a single A school, has 17 state titles of its own. Not bad considering that there are 136 high school teams in West Virginia with 38 in AAA. We may not have a pro sports team, but in high school sports, Parkersburg as a whole is pretty dominant"[26] as written in an article on espn.com.

Jackson Middle School is located in Vienna although it has a Parkersburg mailing address. Blennerhassett Junior High School is adopting the "middle school" designation.

The drinking water supply of Parkersburg was polluted with PFOA by DuPont chemical company.[29] 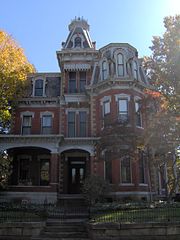 The Chancellor House in the Julia-Ann Square Historic District.