Parks and open spaces in Wandsworth 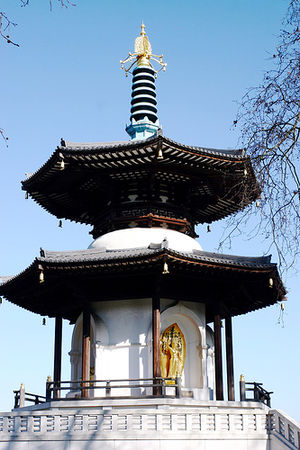 The inner London borough of Wandsworth contains some 670 hectares (1,700 acres) of green space in the form of parks, commons, allotments and cemeteries, which is the largest proportion for any London borough.

At 92 hectares (230 acres), the continuous green swathe of the Tooting Commons in the south of the borough, between Balham and Streatham, is Wandsworth's largest public open space. It is followed by the more central 83-hectare (210-acre) Battersea Park, on the River Thames in the north of the borough. This has Battersea Park Nature Areas, the borough's only Local Nature Reserve. Wandsworth Common, to the south of Clapham Junction, is the third largest park, at 73 hectares (180 acres).

Wimbledon and Putney Commons are very large open spaces, 479 hectares (1,180 acres) in total, partly within the borough, to the south of Putney and Roehampton, and are managed by a board of Conservators rather than any individual borough.

King George's Park is a 23-hectare (57-acre) stretch of green space along the western side of the River Wandle, just south of Wandsworth town centre. It is one of a string of green spaces along the Wandle Valley, along with Garratt Park in Earlsfield and Lambeth Cemetery in Tooting.

Remaining green spaces in the borough include Falcon Park in Battersea (a green space enclosed within a railway junction), Wandsworth Park (a Grade II listed park on the River Thames between Wandsworth and Putney), Roehampton Golf Course, Central London Golf Centre, the western half of Clapham Common, Wandsworth Cemetery, Streatham Cemetery and York Gardens, along with a whole host of smaller spaces. [1] 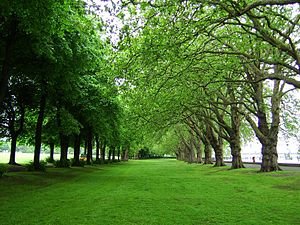