Parliament of the World's Religions

An organization was incorporated in 1988 to carry out the tradition of the Parliament of the World's Religions by marking the centennial of the first Parliament. Council for a Parliament of the World's Religions[1] is headquartered in Chicago. Its stated mission is "... to cultivate harmony among the world's religious and spiritual communities and foster their engagement with the world and its guiding institutions in order to achieve a just, peaceful and sustainable world.".[2] Its board of trustees are elected from various faith communities. The Parliament it is chaired[3] by Imam Abdul Malik Mujahid.[4] Rev. Dr. Larry Greenfield serves as its Vice Chair and Interim Executive Director.[5] 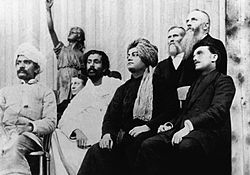 In 1893, the city of Chicago hosted the World Columbian Exposition, an early world's fair. So many people were coming to Chicago from all over the world that many smaller conferences, called Congresses and Parliaments, were scheduled to take advantage of this unprecedented gathering. A number of congresses were held in conjunction with the exposition, including those dealing with anthropology (one of the major themes of Exposition exhibits), labor, medicine, temperance, commerce and finance, literature, history, art, philosophy, and science. One of these was the World's Parliament of Religions, an initiative of the Swedenborgian layman (and judge) Charles C. Bonney.[7][8] The Parliament of Religions was by far the largest of the congresses held in conjunction with the Exposition.[9] John Henry Barrows, a clergyman, was appointed as the first chairman of the General Committee of the 1893 Parliament by Charles Carroll Bonney.[10]

The Parliament of Religions opened on 11 September 1893 at the World's Congress Auxiliary Building which is now The Art Institute of Chicago, and ran from 11 to 27 September, marked the first organised gathering of representatives of Eastern and Western spiritual traditions. Today it is recognized as the occasion of the birth of formal interreligious dialogue worldwide, with representatives of a wide variety of religions and new religious movements, including:

Absent from this event were Native American religious figures, Sikhs and other Indigenous and Earth centered religionists; it would not be until the 1993 Parliament that these religions and spiritual traditions would be represented.

From March to May 1930, Kyoto, Japan hosted a Great Religious Exposition (宗教大博覧会, Shūkyō Dai-hakurankai?). Religious groups from across Japan and China exhibited at the fair.[17] All of Japan's traditional Buddhist sects had an exhibit, as well as Protestant and Catholic Christianity and the new religious sect Oomoto. The Oomoto pavilion, which included a mural of all the world's religions, hands-on pottery painting, and humorous paintings of Bodhidharma, attracted the most interest and coverage by far. Many visitors returned to the Oomoto pavilion, which was constantly being updated, six or seven times over the two months of the exposition.[18]

In 1993, the Parliament convened at the Palmer House hotel in Chicago. Over 8,000 people from all over the world, from many diverse religions, gathered to celebrate, discuss and explore how religious traditions can work together on the critical issues which confront the world. A document, "Towards a Global Ethic: An Initial Declaration", mainly drafted by Hans Küng, set the tone for the subsequent ten days of discussion. This global ethic was endorsed by many of the attending religious and spiritual leaders who were part of the parliament assembly.

Also created for the 1993 parliament was a book, A Sourcebook for the Community of Religions, by the late Joel Beversluis, which has become a standard textbook in religion classes. Unlike most textbooks of religion, each entry was written by members of the religion in question.

The keynote address was given by the Dalai Lama on the closing day of the assembly. Cardinal Joseph Bernardin also participated.

More than 7,000 individuals from over 80 countries attended 1999 Parliament in Cape Town, South Africa. The Parliament began with a showing of the international AIDS Memorial Quilt to highlight the epidemic of AIDS in South Africa, and of the role that religious and spiritual traditions play in facing the critical issues that face the world. The event continued with hundreds of panels, symposia and workshops, offerings of prayer and meditation, plenaries and performances. The programs emphasized issues of religious, spiritual, and cultural identity, approaches to interreligious dialogue, and the role of religion in response to the critical issues facing the world today.

The Parliament Assembly considered a document called A Call to Our Guiding Institutions, addressed to religion, government, business, education, and media inviting these institutions to reflect on and transform their roles at the threshold of the next century.

In addition to the Call, the Parliament staff had created a book, Gifts of Service to the World, showcasing over 300 projects considered to be making a difference in the world. The Assembly members also deliberated about Gifts of Service which they could offer or could pledge to support among those projects gathered in the Gifts document.

It was celebrated in the Universal Forum of Cultures.[19] More than 8,900 individuals attended the 2004 Parliament in Barcelona, Spain. Having created the declaration Towards a Global Ethic [20] at the 1993 Parliament and attempted to engage guiding institutions at the 1999 Parliament, the 2004 Parliament concentrated on four pressing issues: mitigating religiously motivated violence, access to safe water, the fate of refugees worldwide, and the elimination of external debt in developing countries. Those attending were asked to make a commitment to a "simple and profound act" to work on one of these issues.

Forum Monterrey 2007 was an international event which included Parliament-style events and dialogues.[21] It was held as part of the 2007 Universal Forum of Cultures, which featured international congresses, dialogues, exhibitions, and spectacles on the themes of peace, diversity, sustainability and knowledge. Special emphasis was placed on the eight objectives of the Millennium Development goals for eradicating abject poverty around the world.

Melbourne, Australia, hosted the 2009 Parliament of the World's Religions. The 2009 parliament took place from 3 to 9 December. Over 6,000 people attended the parliament.[22]

The Melbourne parliament addressed issues of Aboriginal reconciliation. The issues of sustainability and global climate change were explored through the lens of indigenous spiritualities. Environmental issues and the spirituality of youth were also key areas of dialogue.

The Council for a Parliament of the World's Religions suggested that the Melbourne parliament would "educate participants for global peace and justice" through exploring religious conflict and globalization, creating community and cross-cultural networks and addressing issues of religious violence. It supported "strengthening religious and spiritual communities" by providing a special focus on indigenous and Aboriginal spiritualities; facilitating cooperation between Pagan, Jewish, Christian, Bahá'í, Jain, Muslim, Buddhist, Sikh and Hindu communities; crafting new responses to religious extremism and confronting homegrown terrorism and violence.[23]

In 2011, The Parliament of World's Religions announced that the 2014 Parliament would take place in Brussels, Belgium.[24] In November 2012, a joint statement from Brussels and CPWR announced that because of the financial crisis in Europe, Brussels was unable to raise the funds required for a Parliament.[25]

On October 15-19, the 2015 Parliament took place at the Salt Palace Convention Center in Salt Lake City, Utah.[26] 9,806 attendees, performers, and volunteers from 73 countries, 30 Major Religions and 548 Sub-Traditions participated in the Parliament.[27]

As far back as 1925, Christian writer G. K. Chesterton portrayed the Parliament as "a pantheon for pantheists" in The Everlasting Man.