The name Parsippany comes from the Lenape Native American sub-tribe, which comes from the word parsipanong, which means "the place where the river winds through the valley".[19][21] Parsippany-Troy Hills is the most populous municipality in Morris County.[22] The name Troy Hills was changed from Troy, to avoid confusion of mail being sent erroneously to Troy, New York.[23]

In 2006, Parsippany-Troy Hills was recognized by Money magazine as the 17th-ranked of the Best Places to Live in the United States, the highest-ranked location in New Jersey. In 2008, it moved up to 13th position.[26] Parsippany returned to Money Magazine's "Best Places" list in 2012, in the 15th position. It returned to the list in 2014, where it ranked 16 with Money citing its "Arts and leisure".[27]

After the Wisconsin Glacier melted around 13,000 BC, half of Parsippany was filled with water as this was Lake Passaic. Around the area grasses grew, as the area was tundra and then turned into a taiga/boreal forest as the area warmed. Paleo-Indians moved in small groups into the area around 12,500 years ago, attracted by the diversity of plant and animal life. Native Americans settled into the area several thousand years ago, dwelling in the highlands and along the Rockaway River and the Whippany River, where they hunted and fished for the various game that lived in the area and migrated through the area in autumn. Paintings in a rock cave were found in the late 1970s in western Parsippany in the highlands.

On August 27, 1664, three English ships approached Fort Amsterdam and the fort was surrendered to the English. The English now controlled New Netherland and Morris County was now under control of the colony of New York. Relations with the Native Americans improved for a while.

There was a war with the Dutch ten years later. The Dutch re-took control of New Amsterdam but after a year returned it to the English. Relations with the Native Americans and English improved for a while English settlers started to move into the area around 1700. The Parsippany area had flat land and fertile soil, and a fresh water supply, allowing them to succeed at farming. All types of game, especially waterfowl provided colonists a chance to succeed.

The township has a humid continental climate, with cold winters and very warm-to-hot summers. It is usually cooler than Manhattan at night and in the early morning. The record low temperature is −26 °F (−32 °C), and the record high is 104 °F (40 °C).

Parsippany-Troy Hills lies in the Newark Piedmont Basin. Around 500 million years ago, a chain of volcanic islands crashed into proto North America, riding over the North American Plate and creating the New Jersey Highlands, which start in the western portion of the township. This strike also created land formations in the rest of eastern New Jersey. Around 450 million years ago, a small continent, long and thin, collided with North America, creating folding and faulting in western New Jersey and southern Appalachia.

The swamps and meadows of Parsippany were created when the North American Plate separated from the African Plate. An aborted rift system or half gruben was created. The land area lowered between the Ramapo Fault in western Parsippany and a fault west of Paterson. The Ramapo Fault goes though western part of the township.

The Wisconsin Glacier came into the area around 21,000 BC and left around 13,000 BC due to a warming in climate. As the glacier slowly melted, this created rivers, streams and lakes, leaving most of the township under Lake Passaic, which was the biggest lake in New Jersey at that time, stretching from the edge of the Ramapo Fault in western Parsippany eastward to almost Paterson.

The area was first tundra when the Wisconsin Glacier melted and then as the area warmed formed taiga/boreal forests, along with vast meadows. Slowly Lake Passaic drained and formed swamps in the township, such as Troy Meadows, and Lee Meadows on the old Alderney Farm tract are perfect examples. Due to the fact that there was lowlands next to highlands created a diversity of flora and fauna. Swamps and meadows next to oak forests created a diverse flora and fauna spectrum. 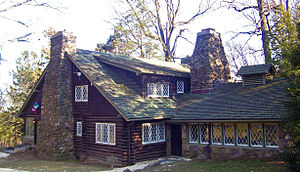 Since 1967, the Vince Lombardi Trophy has been exclusively handcrafted by Tiffany & Co. in Parsippany each year for the winning team of the Super Bowl, as is the Larry O'Brien Championship Trophy granted to the winner of the NBA Finals.[38]

Cendant Corporation moved its headquarters to Parsippany-Troy Hills in 2001; in 2006 Cendant separated into several different companies, including Avis Budget Group, parent company of Avis Rent a Car System and Budget Rent a Car.[47][48][49]

Parsippany SC is a soccer club that hosts teams in both the Super Y-League and the Super-20 League.[50]

Parsippany-Troy East, one of Parsippany's two township Little League teams, competed in the 2012 Little League World Series, losing in the third round of play at South Williamsport, Pennsylvania to a team from Petaluma, California.[51]

The township is governed within the Faulkner Act (formally known as the Optional Municipal Charter Law) under the Mayor-Council system of municipal government (Plan E), implemented based on the recommendations of a Charter Study Commission as of January 1, 1966.[52] The government consists of a mayor and a five-member Township Council, all elected to four-year terms of office on an at-large basis in partisan elections held every other year as part of the November general election. Either two or three council seats are up for vote each election, with the mayoral seat up for vote at the same time that two seats are up for vote.[6] The Mayor and Council are separately elected, with the Mayor, serving as the chief executive officer, and the Council serving in the capacity of a legislative body.

Some responsibilities of the Mayor include preparation of the budget, enforcement of the ordinances, supervision of municipal departments and property, execution of Council decisions, and oversight of other functions of the municipality. Some of the responsibilities of the Council include adopting ordinances, approval of contracts presented by the Mayor, scheduling times and places for council meetings and designation of the official newspapers of the municipality.

Barberio unseated incumbent Mayor Michael Luther by a margin of 8% in 2009, in an election in which Republicans took hold of all of the township's elected offices.[62]

Parsippany-Troy Hills Township is located in the 11th Congressional District[64] and is part of New Jersey's 26th state legislative district.[9][65][66]

For the 2014-2015 Session, the 26th Legislative District of the New Jersey Legislature is represented in the State Senate by Joseph Pennacchio (R, Montville) and in the General Assembly by BettyLou DeCroce (R, Parsippany-Troy Hills) and Jay Webber (R, Morris Plains) and [71][72] The Governor of New Jersey is Chris Christie (R, Mendham Township).[73] The Lieutenant Governor of New Jersey is Kim Guadagno (R, Monmouth Beach).[74]

Parsippany Troy-Hills Township is protected by six different fire districts serving out of ten fire houses throughout the township. Each district operates as their own fire department with each having its own Chief and other line officers. Every district is 100% volunteer and are on call around the clock, with dispatching for all fire districts provided by the township police department.[96]

Parsippany Christian School, established in 1970, serves students in preschool through twelfth grade as a ministry of Parsippany Baptist Church.[119]

All Saints' Academy serves preschool though eighth grade, as the result of a 2009 merger of Saint Christopher Parochial school and Saint Peter the Apostle School.[120] St. Elizabeth School, founded in 1970, offers Montessori education to children in preschool through sixth grade.[121] Both are Catholic schools operated under the auspices of the Roman Catholic Diocese of Paterson.[122]

The Mount Tabor station[135] offers train service on the New Jersey Transit Morristown Line, with service to and from Penn Station in Midtown Manhattan and Hoboken Terminal.[136]

Bus service to the Port Authority Bus Terminal in Midtown Manhattan is provided by Lakeland Bus Lines along Route 46 and Interstate 80.[141][142]

People who were born in, residents of, or otherwise closely associated with Parsippany-Troy Hills include: