From Infogalactic: the planetary knowledge core
(Redirected from Parts per million)
Jump to: navigation, search
For the film, see Parts per Billion. 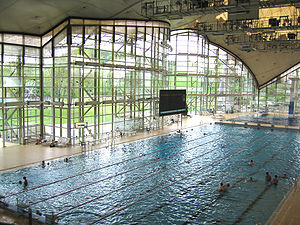 One part per trillion (1 ppt) is a proportion equivalent to a drop of water diluted into 400 Olympic-size swimming pools.

In science and engineering, the parts-per notation is a set of pseudo units to describe small values of miscellaneous dimensionless quantities, e.g. mole fraction or mass fraction. Since these fractions are quantity-per-quantity measures, they are pure numbers with no associated units of measurement. Commonly used are ppm (parts-per-million, 10−6), ppb (parts-per-billion, 10−9), ppt (parts-per-trillion, 10−12) and ppq (parts-per-quadrillion, 10−15).

Parts-per notation is often used describing dilute solutions in chemistry, for instance, the relative abundance of dissolved minerals or pollutants in water. The unit “1 ppm” can be used for a mass fraction if a water-borne pollutant is present at one-millionth of a gram per gram of sample solution. When working with aqueous solutions, it is common to assume that the density of water is 1.00 g/mL. Therefore, it is common to equate 1 gram of water with 1 mL of water. Consequently, 1 ppm corresponds to 1 mg/L and ppb corresponds to 1 μg/L.

Similarly, parts-per notation is used also in physics and engineering to express the value of various proportional phenomena. For instance, a special metal alloy might expand 1.2 micrometers per meter of length for every degree Celsius and this would be expressed as “α = 1.2 ppm/°C.” Parts-per notation is also employed to denote the change, stability, or uncertainty in measurements. For instance, the accuracy of land-survey distance measurements when using a laser rangefinder might be 1 millimeter per kilometer of distance; this could be expressed as “Accuracy = 1 ppm.”[1]

Parts-per notations are all dimensionless quantities: in mathematical expressions, the units of measurement always cancel. In fractions like “2 nanometers per meter” (2 nm/m = 2 nano = 2 × 10−9 = 2 ppb = 2 × 0.000000001) so the quotients are pure-number coefficients with positive values less than 1. When parts-per notations, including the percent symbol (%), are used in regular prose (as opposed to mathematical expressions), they are still pure-number dimensionless quantities. However, they generally take the literal “parts per” meaning of a comparative ratio (e.g., “2 ppb” would generally be interpreted as “two parts in a billion parts”).[2]

Parts-per notations may be expressed in terms of any unit of the same measure. For instance, the coefficient of thermal expansion of a certain brass alloy, α = 18.7 ppm/°C, may be expressed as 18.7 (µm/m)/°C, or as 18.7 (µin/in)/°C; the numeric value representing a relative proportion does not change with the adoption of a different unit of measure.[3] Similarly, a metering pump that injects a trace chemical into the main process line at the proportional flow rate Qp = 125 ppm, is doing so at a rate that may be expressed in a variety of volumetric units, including 125 µL/L, 125 µgal/gal, 125 cm3/m3, etc.

Although the International Bureau of Weights and Measures (an international standards organization known also by its French-language initials BIPM) recognizes the use of parts-per notation, it is not formally part of the International System of Units (SI).[2] Note that although “percent” (%) is not formally part of the SI, both the BIPM and the ISO take the position that “in mathematical expressions, the internationally recognized symbol % (percent) may be used with the SI to represent the number 0.01” for dimensionless quantities.[2][5] According to IUPAP, “a continued source of annoyance to unit purists has been the continued use of percent, ppm, ppb, and ppt.”[6]. Although SI-compliant expressions should be used as an alternative, the parts-per notation remains nevertheless widely used in technical disciplines. The main problems with the parts-per notation are the following:

Because the named numbers starting with a “billion” have different values in different countries, the BIPM suggests avoiding the use of “ppb” and “ppt” to prevent misunderstanding. In the English language, named numbers have a consistent meaning only up to “million”. Starting with “billion”, there are two numbering conventions: the “long” and “short” scales, and “billion” can mean either 1012 or 109. The U.S. National Institute of Standards and Technology (NIST) takes the stringent position, stating that “the language-dependent terms [ . . . ] are not acceptable for use with the SI to express the values of quantities.”[7]

Another problem of the parts-per notation is that it may refer to mass fraction, mole fraction or volume fraction. Since it is usually not stated which quantity is used, it is better to write the unit as kg/kg, mol/mol or m3/m3 (even though they are all dimensionless).[8] The difference is quite significant when dealing with gases and it is very important to specify which quantity is being used. For example, the conversion factor between a mass fraction of 1 ppb and a mole fraction of 1 ppb is about 4.7 for the greenhouse gas CFC-11 in air. For volume fraction, the suffix "V" or "v" is sometimes appended to the parts-per notation (e.g., ppmV, ppbv, pptv).[9][10] Unfortunately, ppbv and pptv are also often used for mole fractions (which is identical to volume fraction only for ideal gases).

The usage is generally quite fixed inside most specific branches of science, leading some researchers to draw the conclusion that their own usage (mass/mass, mol/mol, volume/volume, or others) is the only correct one. This, in turn, leads them to not specify their usage in their publications, and others may therefore misinterpret their results. For example, electrochemists often use volume/volume, while chemical engineers may use mass/mass as well as volume/volume. Many academic papers of otherwise excellent level fail to specify their usage of the parts-per notation.

SI-compliant units that can be used as alternatives are shown in the chart below. Expressions that the BIPM does not explicitly recognize as being suitable for denoting dimensionless quantities with the SI are shown in underlined green text.

Note that the notations in the “SI units” column above are all dimensionless quantities; that is, the units of measurement factor out in expressions like “1 nm/m” (1 nm/m = 1 nano = 1 × 10−9) so the quotients are pure-number coefficients with values less than 1.

Common parts-per notations in terms of the uno are given in the table below.

In 2004, a report to the International Committee for Weights and Measures (known also by its French-language initials CIPM) stated that response to the proposal of the uno "had been almost entirely negative" and the principal proponent "recommended dropping the idea".[13] To date, the uno has not been adopted by any standards organization and it appears unlikely it will ever become an officially sanctioned way to express low-value (high-ratio) dimensionless quantities. The proposal was instructive, however, as to the perceived shortcomings of the current options for denoting dimensionless quantities.

Note however, that it is not uncommon to express aqueous concentrations—particularly in drinking-water reports intended for the general public—using parts-per notation (2.1 ppm, 0.8 ppb, etc.) and further, for those reports to state that the notations denote milligrams per liter or micrograms per liter. Although "2.1 mg/L" is not a dimensionless quantity, it is assumed in scientific circles that "2.1 mg/kg" (2.1 ppm) is the true measure because one liter of water has a mass of about one kilogram. The goal in all technical writing (including drinking-water reports for the general public) is to clearly communicate to the intended audience with minimal confusion. Drinking water is intuitively a volumetric quantity in the public’s mind so measures of contamination expressed on a per-liter basis are considered to be easier to grasp. Still, it is technically possible, for example, to "dissolve" more than one liter of a very hydrophilic chemical in 1 liter of water; parts-per notation would be confusing when describing its solubility in water (greater than a million parts per million), so one would simply state the volume (or mass) that will dissolve into a liter, instead.

When reporting air-borne rather than water-borne densities, a slightly different convention is used since air is approximately 1000 times less dense than water. In water, 1 µg/m3 is roughly equivalent to parts-per-trillion whereas in air, it is roughly equivalent to parts-per-billion. Note also, that in the case of air, this convention is much less accurate. Whereas one liter of water is almost exactly 1 kg, one cubic meter of air is often taken as 1.143 kg—much less accurate, but still close enough for many practical uses.[citation needed]