Pas-de-Calais (French pronunciation: ​[pɑ d(ə) kalɛ]) is a department in northern France. Its name is the French equivalent of the Strait of Dover, which it borders.

Inhabited since prehistoric times, the Pas-de-Calais region was populated in turn by the Celtic Belgae, the Romans, the Germanic Franks and the Alemanni. During the fourth and fifth centuries, the Roman practice of co-opting Germanic tribes to provide military and defence services along the route from Boulogne to Cologne created a Germanic-Romance linguistic border in the region that persisted until the eighth century.

Saxon colonization into the region from the fifth to the eighth centuries likely extended the linguistic border somewhat south and west so that by the ninth century most inhabitants north of the line between Béthune and Berck spoke a dialect of Middle Dutch, while the inhabitants to the south spoke Picard, a variety of Romance dialects.

This linguistic border is still evident today in the toponyms and patronyms of the region. Beginning in the ninth century, the linguistic border began a steady move to north and the east, and by the end of the 15th century Romance dialects had completely displaced those of Dutch.

Pas-de-Calais is one of the original 83 departments created during the French Revolution on 4 March 1790. It was created from parts of the former provinces of Calaisis, formerly English, Boulonnais, Ponthieu and Artois, this last formerly part of the Spanish Netherlands.

Some of the costliest battles of World War I were fought in the region. The Vimy Memorial commemorates the Battle of Vimy Ridge and is Canada's most important memorial to its fallen soldiers.

Pas-de-Calais was also the target of Operation Fortitude during World War II, which was an Allied plan to deceive the Germans that the invasion of Europe at D-Day was to occur here, rather than in Normandy.[1] 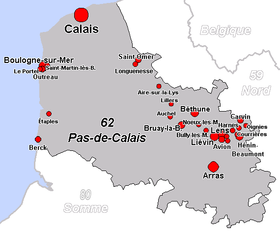 Pas-de-Calais is in the current region of Nord-Pas-de-Calais-Picardie and is surrounded by the departments of Nord and Somme, the English Channel, and the North Sea. It shares a nominal border with the English county of Kent halfway through the Channel Tunnel.

Its principal towns are, on the coast, Calais, Boulogne-sur-Mer and Étaples, and in Artois, Lens, Liévin, Arras, and Saint-Omer.

The principal rivers are the following:

The economy of the department was long dependent on mining, primarily the coal mines. However, since World War II, the economy has become more diversified.

The inhabitants of the department are called Pas-de-Calaisiens.

Pas-de-Calais is one of the most densely populated departments of France, and yet it has no large cities. Calais has only about 80,000 inhabitants, followed closely by Arras, Boulogne-sur-Mer, Lens and Liévin. The remaining population is primarily concentrated along the border with the department of Nord in the mining district, where a string of small towns constitutes an urban area with a population of about 1.2 million. The center and south of the department are more rural, but still quite heavily populated, with many villages and small towns.

Although the department saw some of the heaviest fighting of World War I, its population rebounded quickly after both world wars. However, many of the mining towns have seen dramatic decreases in population, some up to half of their population.

The Université d'Artois' campus in Lens sits in the ancient headquarters of Compagnie des mines.

There are two public universities in the department. Although it is one of the most populous departments of France, Pas-de-Calais did not contain one until the early nineties. In 1991, the French government took the decision to create two universities : ULCO (Université du Littoral Côte d'Opale)[2] on the western part of the department, and Université d'Artois[3] on the eastern part.