Pascal Wehrlein (born 18 October 1994) is a German Formula One driver for Manor.[2] Holding dual nationality of Germany and Mauritius, he races under the German flag in Formula One.[3] He previously raced in the DTM, winning the title with the Mercedes-Benz team HWA AG in 2015. In 2014 Wehrlein became the youngest driver to win a DTM race at the age of 19 and the youngest to win the title in 2015 at the age of 21.

Wehrlein competing in the 2014 DTM season.

Born in Sigmaringen to a German father and Mauritian mother,[4] Wehrlein began karting in 2003 and raced only in his native Germany for the majority of his career, working his way up from the junior ranks to progress through to the KF2 category by 2009, when he finished on fifth position in ADAC Kart Masters.[5][6]

2010 saw his debut in the ADAC Formel Masters championship with ADAC Berlin-Brandenburg e.V. (also known as Mücke Motorsport). Wehrlein finished sixth in the championship with win at Sachsenring and another three podiums.[7][8] He remained in series with the team for the next year. Wehrlein scored seven wins at Oschersleben, Sachsenring, Zolder, Nürburgring and Lausitz on his way to championship title.

In 2012, Wehrlein stepped up to the Formula 3 Euro Series, continuing with Mücke Motorsport.[9] He finished 2nd in the championship to Daniel Juncadella.

Wehrlein made his debut in the Deutsche Tourenwagen Masters (DTM) in 2013 at the age of 18. In a career spanning three seasons Wehrlein managed to be one of the leading drivers in the field despite his youthful age.

In his debut season he achieved 3 points finishing 22nd in the championship. He also achieved his first of two fastest laps in his career.

In 2014 he switched teams to HWA where became the youngest driver in the series history to claim pole position and win a race on route to 8th in the championship with 46 points collected. Besides his stand out victory at Lausitz, Wehrlein second best result of the season was a fifth-place finish at Norisring.

In 2015 DTM returned to running two races per race weekend, resulting in 18 rounds in the 2015 championship. Due to the inconsistency of most teams and drivers Wehrlein won the title easily having scored in all round except for three. He achieved 5 podiums, one fastest lap and two wins. He is the first driver to win the championship having not claimed a pole position throughout his championship season while also being the youngest ever DTM champion. 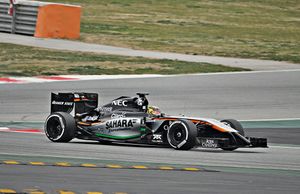 Wehrlein testing for Force India during the 2015 pre-season

In September 2014, it was announced that Wehrlein would act as a reserve driver for the Mercedes F1 Team.[10] He took part in preseason testing in Barcelona, driving for both Force India and Mercedes. 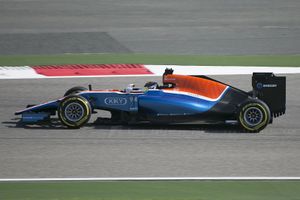 Wehrlein driving for Manor at the 2016 Bahrain Grand Prix

In February 2016, it was announced that Wehrlein would make his F1 debut with Manor Racing.[2] It is understood that Manor will receive access to Mercedes' wind tunnel in exchange for hiring Wehrlein.[1]

† Driver did not finish, but completed 75% of the race distance.