Paschal Mystery is one of the central concepts of Christian faith relating to the history of salvation. Its main subject is the passion, death, and Resurrection of Jesus Christ – the work God the Father sent his Son to accomplish on earth. According to the Compendium of the Catechism of the Catholic Church, "The Paschal Mystery of Jesus, which comprises his passion, death, resurrection, and glorification, stands at the center of the Christian faith because God's saving plan was accomplished once for all by the redemptive death of his Son Jesus Christ."[1]

Catholic, Anglican and Orthodox Christian churches celebrate this mystery on Easter. It is recalled and celebrated also during every Eucharist,[2] and especially on a Sunday, which is the Pascha of the week.[3]

The word "paschal" is the equivalent of Greek "pascha" and is derived from Aramaic "pasḥā" and Hebrew "pesaḥ", meaning "the passing over" (cf. Ex 12:13.23.27; cf. Is 31,5). The origin is not known. Some scholars refer to Assyrian "pasah" – appease or Egyptian "pa-sh" – remembrance or "pē-sah" – the blow. The Bible links "pesaḥ" with "pāsaḥ" – two literal meanings are: to limp and to perform a ritual dance around a sacrifice (1 K 18:21.26). Figuratively it may be understood, "to jump", "to pass", "to spare". It refers to the passage of God on the Passover night, when the Israelites left Egypt. God struck the houses of Egyptians and left the Israelites untouched, i.e. passed over.[4]

The second word, mystery, is regarded in Christian 20th century theology as one of the most important key-words of Christianity and its theology. It opposes the ideas of Gnosticism, Rationalism and Semi-Rationalism, pointing out that there are Divine mysteries properly so called which cannot be grasped by mere human reasoning and can only be revealed by God through grace.[5][6] In this meaning mystery describes not an idea that must be unlocked or solved like a mystery novel, but the Divine truth and life, to which God through the Church, sacraments, word of God and faith initiates the dedicatees (cf. Eph 1,17ff).

The very first known use of the term Paschal mystery (literally Mystery of the Pascha) was found in the homily of Melito of Sardis On the Pascha written between A.D. 160 and 170:[7]

immortal because of the rising from the god

According to Raniero Cantalamessa OFMCap, patristic interpretation of the paschal mystery in its major facets and constituent dimensions may be summarised in four points:

To underscore the importance of the Paschal mystery, the Compendium of the Catechism of the Catholic Church, states that "The Paschal Mystery of Jesus, which comprises his passion, death, resurrection, and glorification, stands at the center of the Christian faith because God's saving plan was accomplished once for all by the redemptive death of his Son Jesus Christ."[9]

The term Mysterium paschale was used repeatedly during Second Vatican Council (1963–65) as a meaningful designation of the Christian redemption proclaimed and now accomplished in the liturgy. Council Fathers endorsed the fruit of the work of scholars of the Liturgical Movement, specifically Dom Odo Casel and the whole Maria Laach school. The term mystery of salvation made its way to the Council documents not without some opposition or misunderstanding. Some fathers expressed doubts saying that it was a vague and chimeric idea, its orthodoxy was dubious, and that it was ignored by sound theology. Eventually the Council decided to confirm the importance of the term. It is reflected especially in the Constitution on the liturgy Sacrosanctum Concilium.[10][11] In the very beginning of 1st chapter, where the Council document speaks about restoration and promotion of the liturgy, paschal mystery is shown as the way Christ has redeemed mankind:

The wonderful works of God among the people of the Old Testament were but a prelude to the work of Christ the Lord in redeeming mankind and giving perfect glory to God. He achieved His task principally by the paschal mystery of His blessed passion, resurrection from the dead, and the glorious ascension, whereby "dying, he destroyed our death and, rising, he restored our life".[12] For it was from the side of Christ as He slept the sleep of death upon the cross that there came forth "the wondrous sacrament of the whole Church"[13]

After Second Vatican Council the term Paschal mystery has been used by Catholic Church Magisterium as one of basic concepts of Christian faith and life.

In 1992 letter Communionis notio of the Congregation for the Doctrine of the Faith to the bishops about the Church understood as communion, paschal mystery is explained as the means by which God's initiative was carried out to bring to disciples of Christ and, indeed, to the whole of mankind the gift of communion.[14]

John Paul II in his letter on keeping the Lord's day holy wrote that to celebrate Sunday is to make present the graces of the Paschal Mystery, which is the climax of the salvation history:

The Paschal Mystery of Christ is the full revelation of the mystery of the world's origin, the climax of the history of salvation and the anticipation of the eschatological fulfilment of the world. What God accomplished in Creation and wrought for his People in the Exodus has found its fullest expression in Christ's Death and Resurrection, though its definitive fulfilment will not come until the Parousia, when Christ returns in glory. In him, the "spiritual" meaning of the Sabbath is fully realized, as Saint Gregory the Great declares: "For us, the true Sabbath is the person of our Redeemer, our Lord Jesus Christ."[15]

The document called Instrumentum Laboris, issued before the Synod on the Eucharist (2005), spoke about perception of the Eucharistic mystery among the faithful. In many developed countries Christians fail to see the Eucharist as a celebration of the paschal mystery. They tend to perceive it as simply the fulfilment of a Sunday obligation and a meal of fellowship. The paschal mystery, celebrated in an unbloody manner on the altar, is much more a source of spiritual strength to those Christians who live in the situation of suffering, wars, and natural disasters etc.[16]

Pope called for new communities and movements to assist in the practical realisation of that programme in parishes:

Each Christian community is called to be a place where people can be taught about the mysteries celebrated in faith. In this regard, the Synod Fathers called for greater involvement by communities of consecrated life, movements and groups which, by their specific charisms, can give new impetus to Christian formation. In our time, too, the Holy Spirit freely bestows his gifts to sustain the apostolic mission of the Church, which is charged with spreading the faith and bringing it to maturity. 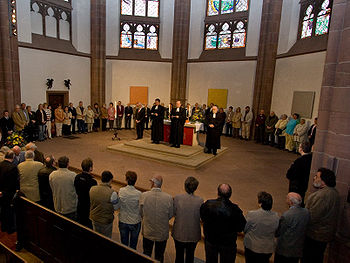 Due to historical context of nominalism promoted by William Ockham, Protestant Eucharist has become more a fraternal meal than a celebration of the paschal mystery. "Abendmahl" during the evangelical service in the church of the Three Kings, Frankfurt am Main.

Paschal mystery and the traditionalists

The concept of the paschal mystery is criticised by the traditionalists. According to the address of the Superior of the Society of St. Pius X, Bishop Bernard Fellay (2001), the theology of the "paschal mystery" minimizes the mystery of the Redemption, because it considers the sacrament only in its relation with the "mystery", and because the conception that it makes of the "memorial" alters the sacrificial dimension of the Mass and as a consequence it renders the post-Conciliar Liturgy dangerously distant from Catholic doctrine.[18] Card. Joseph Ratzinger and Jonathan Robinson CO show that the traditionalists put themselves in a false position, overlooking the fact that the Vatican II's teaching about this issue restored a profoundly traditional doctrine, central to Christian thought and experience.[19][20]

Protestant view of the mystery

Paschal mystery embraces several events of Jesus' passing away from this world. They are central to the Christian Creed.

The Crucifixion and Descent of Jesus to the Dead

Jesus sacrificed his life by freely accepting death on the cross and being put in a tomb. In experiencing death and overcoming it in resurrection, Christ assures us that we will have life everlasting with God as we too, through Christ's accomplishment as our representative, will triumph over death and pass into eternal life with the resurrection of the glorified body.

Three days after he died and was buried, Jesus was raised from the dead with a new and glorified body. All four Gospels of the New Testament clearly give an account of the resurrection. This event is at the heart of faith in Christ (see 1 Corinthians 15:3-5). ....

The Ascension and Exaltation

Forty days after the resurrection, the risen Christ ascended to the Father in Heaven, God's domain. From there, Christ, who is hidden from our eyes, will come again in glory at the end of time to judge the living and the dead. Through the Ascension and Exaltation of Christ, humanity has been given the unbreakable promise of everlasting life with God.

Through the Paschal Mystery everything has been justified and made right in Christ with God. Jesus came to fulfil and perfect the covenant of God, and to assure all that God's love is eternal and constant.

"As Jesus truly dies and is buried, how we should be filled with wonder! Seamlessly the sadness of Christ’s death gives way to the joy of the Resurrection as Easter dawns upon us" (Compendium, 126).